A Chance at Freedom for the Scott Sisters? 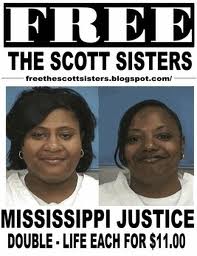 Flyer created by supporters of Jamie and Gladys Scott

The case of sisters Jamie and Gladys Scott, two African American women serving life sentences for an $11 robbery that took place in rural Mississippi in 1993, has gained prominence in recent weeks. The case has a growing urgency, not only because of the unjust length of the sentence and issues with the fairness of the trial, but also because Jamie Scott is suffering from end-stage renal disease, and is receiving questionable care in prison.

Last Tuesday the head of the NAACP, Ben Jealous, urged Mississippi Governor Haley Barbour to pardon the Scotts, saying “We’re looking for the governor to be a humane person in the situation. It is a hideous event in the history of Mississippi.” According to the Jackson Advocate, Jealous joined the Scotts’ attorney, Chokwe Lumumba, in presenting a petition to Barbour requesting a pardon, clemency, or compassionate release.

In Jackson the following day, several hundred people marched past the Governors Mansion and rallied at the Mississippi State Capitol in support of the Scotts. According to Lumumba, thousands of letters have been sent asking Barbour to free the sisters.

Haley Barbour is widely thought to be in the running for the presidency on the Republican ticket, a fact that could cut two ways in the case of the Scotts. On the one hand, he might want to maintain his law and order stance at the expense of the two women. On the other hand, the Scotts’ sentence is so absurd that even the DA who convicted them says it should be reduced, and Barbour might be thinking of letting them go as a small step towards wooing the black vote. In any event, the Scott sisters’ supporters have made their case a difficult one for the governor to simply ignore, which is how he deals with most clemency requests.

None of these developments have had any effect on the hardnosed Judge Marcus Gordon, who originally sentenced the two women, and who remains in charge of their case. According to Nancy Lockhart, the legal analyst who made the case public and remains in close touch with members of the Scott family, Gordon would not sign an order for the sisters to attend their grandfather’s funeral–but they were allowed to attend the wake in shackles.

Solitary Watch was among the first news sources to publish a comprehensive story about the Scott sisters’ case. You can read the original story here, and a follow-up story here.

One thought on “A Chance at Freedom for the Scott Sisters?”