In many prisons, there are different “levels” of solitary confinement, with differences in their living conditions, degree of isolation, and the handful of “privileges”–visits, phone calls, personal hygenine products and reading materials, and in some cases even blankets–afforded to prisoners there. At Lousiana’s Angola prison, for example, there are three levels of solitary confinement: The long-term solitary isolation unit is called CCR–Closed Cell Restriction. But even worse than CCR are the punishment unit called Camp J, and the dungeon known as “The Hole,” where prisoners are put while awaiting disciplinary hearings.

Even on Texas’s notorious death row–housed in the Polunsky Unit, a prison in rural East Texas–there are three levels on which condemned prisoners can be placed. Prisoners on Level 1 can be moved to Level 2 or Level 3 based on rule violations, as adjudicated by prison staff. Thomas Bartlett Whitaker, who has been on death row since 2007 for his part in a 2003 double murder, spent most of that time on Level 1, but earlier this year he did a stint in F-pod on Level 3, where inmates are denied virtually all property and visits. He describes his stay on the blog, Minutes Before Six, where a friend posts his journal entries.

I am told by reliable sources that first impressions are important. If this adage is true, then I must say that F-Pod (sometimes referred to hereafter as simply “Level”) made a very poor initial showing for itself…How to sum up the cages of F-Pod in as few words as possible? Let’s start with: burnt. I mean, “I-left-the-fryer-on-during-my-nap, carbon-is-good-for-you, extra-crispy” It looked like someone had scrawled some arcane astrological sigils all over the walls with charcoal and it smelled like a burning pile of refuse. In seg, when you have a problem, your first avenue of recourse is to speak with the officers working the pod. If they can’t help you, they are supposed to kick the problem up to the sergeants. Some do, and some, of course, do not. Lighting a fire is therefore a pretty good means of simultaneously showcasing your displeasure, as well as an almost guaranteed means of making a ranking officer deal with you.

I’ve seen plenty of fires on other pods of course, though F-Pod is certainly more flame-scarred than anywhere else on 12-Building. More than that, these burn marked were inside the cells; every fire I had ever seen up to this point was set on the run. I must admit I fail to see how giving oneself smoke-inhalation-induced respiratory problems teaches TDC any lessons, but maybe I am just being dense. In any case, it didn’t take me long to give up on the idea of ridding my cell of the stench; I was just going to have to get used to it…

One of the positives about F-Pod is that it is fairly quiet. I think I value silence more than most; some of the pods I’ve lived on here sounded like a jungle scene at night, which can pretty much wreck any attempts at productivity. You do have to keep one wary eye on your own behavior, though. Humans are not made to live in total isolation, and certain systematic breakdowns are inevitable, and well-documented. Solitude and isolation are not necessarily equivalent concepts, but the former does melt into the latter very softly, and once it does, it is a devil to get out. I am not even sure that a man who has completely disconnected from the world should still be called “human” to be honest with you.

I have written several entries on SHU Syndrome already, so I will not belabor the point here, save to say that I basically manifested three different symptoms during my time on F-Pod. (Or, I should note, I noticed three symptoms; it is entirely possible that I missed some.) The first was a form of “benign” vertigo that would come and go at random intervals. Sometimes it would last for minutes, sometimes hours. It was only strong enough on a few occasions to make me vomit, but even at its weakest, it made writing impossible. These effects lasted until April 17th, two days after I made my upgrade from level 3 to Level 2…

The second manifestation of SHU that I experienced was an increased sense of weariness and a desire for sleep. I wrote about this, also, while on Level, and you can read this entry here, complete with a graph of the average increase in hours of sleep experienced by twenty of the men on F-Pod.

The final pathology I noted in myself is somewhat common to a certain subset of convict, namely those of us who pride ourselves on our independence. On Level, this desire for self-reliance gets very, very strong, almost insane it its demands. Since they have taken my visits, my property, my rec, even my toothbrush, you reason, I may as well be a crash dummy and test the limits. This is a bad idea, completely unethical but it whispers in your ear constantly. I found other ways to vent the pressure, such as refusing to eat the trays that I deemed to be truly heinous. I have always done this, but the tactic is not one usually employed on F-Pod, where one has no access to food from the commissary. Me and a good friend… eventually expanded this minimalist campaign into other parts of life. When a ranking officer threatened to take away our mattresses of we didn’t come forward with some information, I made a point o rolling mine up every night for a month and placed it in the corner, where he could both see it and me sleeping on the concrete floor. Eventually I wasn’t even using the sheets anymore. I think he got the message: you can’t threaten a man who isn’t afraid to lose everything. If all of that sounds a little crazy, that is exactly my point: isolation changes you.

Also on Whitaker’s blog is a set of photos of Texas Death Row, which according to him were taken by the state of Texas in response to a FOIA request by an attorney. We are posting a few, with captions by Whitaker; you can view the whole collection here. 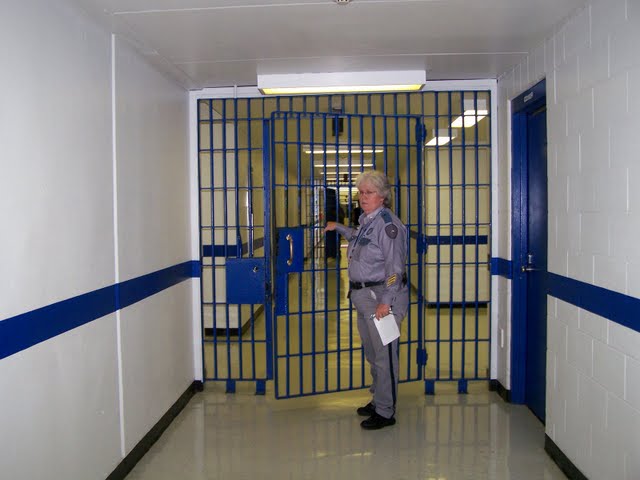 The rather anticlimactic entrance to the Death Capital of the Western World. 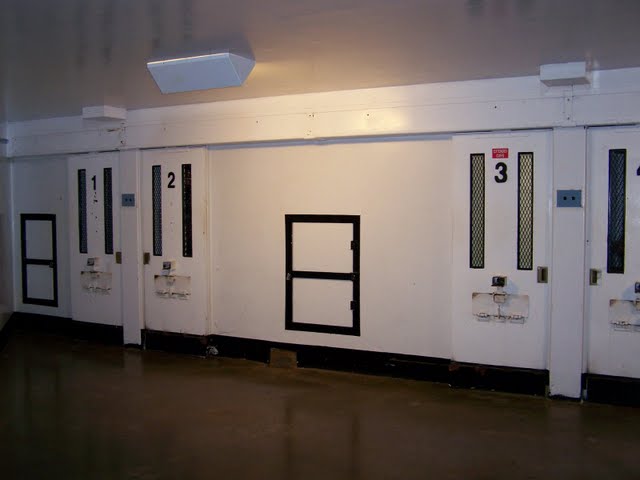 1-Row, A-Section, A-Pod, otherwise known as DeathWatch. This is the last home for the men here living in Texas’ DR, as the final months of their lives wind down. 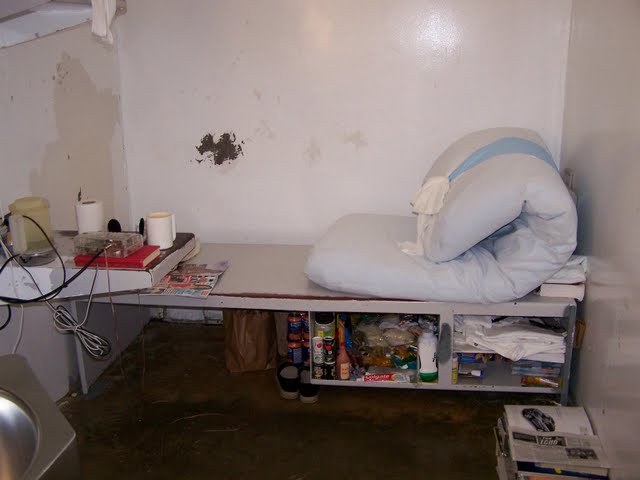 The inside of someone’s cell on DeathWatch. They picked a relatively clean cell, at least in terms of the amount of paint still on the walls. 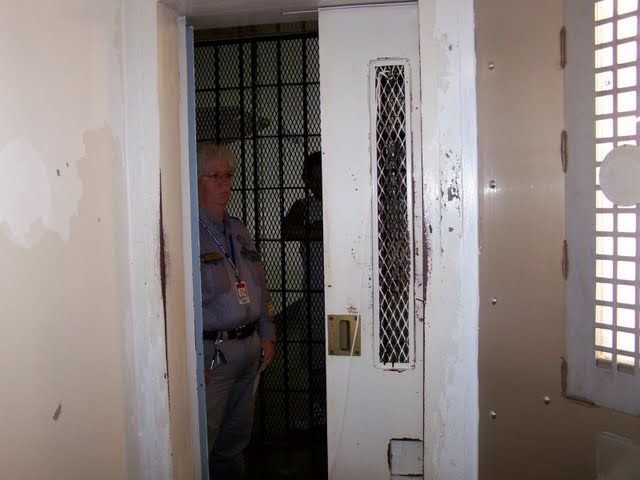 The view of a cell door closing.