Two for One: Guantanamo Won't Close, But Illinois Supermax Will Open 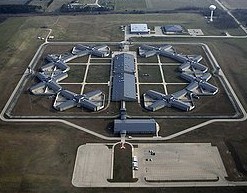 Obama’s oath to close the military detention camp at Guantanamo Bay within a year of his election was more than a campaign promise or a post-inauguration executive order; for many people, it signified a return to some semblance of the rule of law after eight years of a rogue administration. But the 44th president had barely taken office when the opposition–and the backpedaling–began.  In January 2010, the White House announced that it would miss its original deadline for closing Guantanamo. At the same time, however, the administration presented a plan to buy and refit a state prison in rural Illinois, which it promised would serve as the future home for remaining residents of Gitmo.

Six months later, as the New York Times recently reported, “impediments to that plan have mounted in Congress, and the administration is doing little to overcome them.” Charlie Savage writes that “political opposition” and”competing priorities,” make it “unlikely that  President Obama will fulfill his promise to close [Guantanamo] before his term ends in 2013.” The article continues with quotes from members of Congress:

“There is a lot of inertia” against closing the prison, “and the administration is not putting a lot of energy behind their position that I can see,” said Senator Carl Levin, the Michigan Democrat who is chairman of the Senate Armed Services Committee and supports the Illinois plan. He added that “the odds are that it will still be open” by the next presidential inauguration.

And Senator Lindsey Graham, a South Carolina Republican who also supports shutting it, said the effort is “on life support and it’s unlikely to close any time soon.” He attributed the collapse to some fellow Republicans’ “demagoguery” and the administration’s poor planning and decision-making “paralysis.”

According to Savage, “some senior officials” in the adminstration say that the White House “has done its part,” and “blame Congress for failing to execute” the plan to move detainees to Illinois.

One part of that plan, however, is moving forward apace. A few days before the New York Times article appeared, the Associated Press reported that “plans to convert a virtually unused state prison in Illinois into a federal supermax facility are on track…even though its potential as a site for Guantanamo Bay detainees may be foundering.”

The Justice Department informed Illinois lawmakers that “the Obama administration is committed to acquiring the facility in Thomson, Ill., this year,” and that once purchased, “the entire space will be made available to the Bureau of Prisons and converted into a high-security facility with room for 1,600 inmates.” The DOJ’s reassuring message, according to the AP, was meant  “to separate the thornier issue of where Guantanamo Bay detainees will be held from the process of turning the rest of Thomson into a supermax federal prison.”

As we’ve written before, it’s possible Obama still believes that “if you build it, they will come“–meaning that if he buys and renovates the prison in Thomson, Illinois, at least some portion of the remaining Guantanamo detainees will eventually be housed there. It’s also possible that a few years from now, said detainees will still be at Gitmo, and we’ll have another 1,600 cells to fill in an exorbitantly expensive, state-of-the-art federal supermax.

The recent history of the U.S. prison system has proven beyond a doubt that when we build it they do come: Someone will be shipped in to fill those new cells at Thomson, and if they don’t arrive from Gitmo they’ll come from somewhere else. Some prisoners will probably be “upgraded” to supermax from other federal facilities, while others might come from overcrowded prisons to enjoy the comfort of 23-hour-a-day solitary confinement.  They’ll leave behind other beds to fill.

If statistics are any indication, the federal criminal justice system will be only too happy to oblige:  Earlier this year, a survey by the Pew Center on the States found the overall state prison population declining in 2009, for the first time in 40 years. The same survey, however, “found that the federal prison population continued to grow, rising by 6,838 prisoners, or 3.4 percent, to an all-time high of 208,118.”

Those familiar with conditions in U.S. supermax prisons know that they are in many ways considerably worse than those experienced by prisoners at Guantanamo today, now that some of the most grievous abuses of the post 9/11 years have ceased. And in recent months, the Obama administration has indicated that even if they are moved to Thomson, some Guantanamo detainees could be held indefinitely without trial, or be subject to military tribunals. This has prompted some critics to label Thomson “Gitmo North,”  and to question whether there is any advantage to bringing the detainees onto American soil under these conditions.

One thing is clear: The likely outcome of current plans, which would leave Gitmo still open for business along with a new supermax in rural Illinois, is the worst of both worlds.

4 thoughts on “Two for One: Guantanamo Won't Close, But Illinois Supermax Will Open”