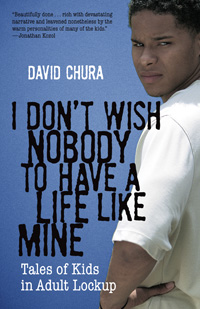 Mother Jones this week ran a powerful two-part excerpt from a new book called I Don’t Wish Nobody to Have a Life Like Mine: Tales of Kids in Adult Lockup. The book is by David Chura, who worked for 10 years as an English teacher in the Westchester County Jail. The published excerpt focuses on the jail’s Special Housing Unit (SHU), which is the euphemism New York State uses for solitary confinement.

As the editors’ introduction puts it, “These state-of-the-art, maximum-security isolation blocks became a trend during the late-1990s prison-building boom…And to accompany the construction spree, state and federal legislators enacted new laws that gave more kids adult sentences in adult institutions.”

As we’ve written before on Solitary Watch, in addition to these converging trends, children in adult correctional facilities are disproportionately likely to be placed in solitary confinement–either because they act up, or for their own “protection.” Large numbers of these kids have psychiatric or emotional problems to begin with, and the affects of isolation on their growing bodies and minds is usually devastating. Cutting and other forms of self-harm are common among these incarcerated children, and suicides are far from rare.

Part 1 of the two-part excerpt from Chura’s book vital background by describing the opening of the then-new SHU, which was actually celebrated as a great improvement over the rest of the jail–cleaner, safer, quieter, and implicitly, more humane. Initially Chura’s students even seemed better behaved–more attentive and less rowdy.

In Part 2, the truth begins to emerge. We’ve included a sample here, but the excerpts–and no doubt the book, as well–are worth reading in full. Chura has also started a blog on abuses of juveniles in the justice system.

It was only after I had been visiting the SHU for a while that I began to see things differently. At first, I thought the changes in my students’ behavior were the result of the calmer, cleaner environment.

But more and more I realized that it was, in fact, the result of their total isolation. They listened, they studied my face, they begged me to return, and they watched me leave because they were hungry—for words, sounds, the sight of people—any stimulation that broke their solitude.

In the months that followed, the SHU began to show this underbelly of deprivation. Conditions deteriorated. The walls got scuffed and nicked where inmates struggled against the emergency response teams carrying them in. Windows grew smeared from hands and faces pressed against the glass.

Gradually, the inmates stopped making their beds. They piled clothes on the floor. They left books and papers wherever they dropped. Now when I visited after class, some of my students would be sleeping. They’d bury themselves under the covers, their heads wrapped up in towels for warmth and to shut out the light.

If I was able to wake them, calling through the tray slot, they’d grumble and splutter to be left alone. Once they knew it was me and got up, they were still polite and appreciative, but they would stare, stunned and bewildered—wondering if I was real or just part of some dream.

And they were dirty. Even the guys who were usually fastidious about grooming became sloppy and disheveled. Like Pinto, who used to arrive to class every day scrubbed, shaved, and smelling of Old Spice. His county oranges would be pressed, and his hair clipped short and brushed to a black lacquer.

But in the SHU, his eyes grew puffy and crusted from endless hours of sleep. His face was covered with a patchy, scruffy beard, and his hair was knotted and woolly. When he leaned down to talk to me his breath was sour, and the odor of his unwashed clothes and body rose out of the metal opening like a malevolent genie.

An update on conditions for at the Westchester County Jail can be found in a scathing report released last fall by the Justice Department, which among other things looked at the use of solitary confinement on juveniles. As summarized by Mother Jones:

At the Westchester lockup, investigators found that half of the inmates recently consigned to the SHU were 16 to 18 years old, and many were doing stints of a year or more in isolation. One 16-year-old got 510 days for assaulting a guard. Another teen, an 18-year-old, was simply thrown in the SHU indefinitely. “Such sentences,” the report noted, “may inflict substantial psychological harm” on juveniles.