Veteran New York Times Supreme Court reporter Linda Greenhouse has an opinion piece today on Clarence Thomas’s “silent but sure” stance on prisons, and “specifically the meaning of the Eighth Amendment’s prohibition against ‘cruel and unusual punishment.’” Thomas’s position is highly relevant to the issue of solitary confinement, since critics of long-term lockdown argue that it violates the Eighth Amendment. But Thomas does not believe that any kind of prisoner abuse qualifies as “cruel and unusual.” Greenhouse writes:

In February 1992, the Supreme Court ruled in Hudson v. McMillian that a prisoner need not have suffered a “significant injury” in order to pursue a lawsuit against prison officials for the use of excessive force. Keith Hudson, the Louisiana inmate who brought that case, had been kicked and punched by three guards while he was handcuffed and shackled. He suffered bruises, swelling and loosened teeth, injuries that a federal appeals court, in dismissing his lawsuit, deemed so minor as to be beneath the notice of the Eighth Amendment.

Mr. Hudson’s appeal to the Supreme Court was supported by the George H.W. Bush administration, and John G. Roberts Jr., then a deputy solicitor general, argued on the inmate’s behalf. In an opinion by Justice Sandra Day O’Connor, the court reinstated the lawsuit. What mattered in such a situation, the court held, was not the extent of the injury, but the nature of the force that was applied. “When prison officials maliciously and sadistically use force to cause harm, contemporary standards of decency always are violated,” Justice O’Connor wrote.

Justice Thomas dissented. He had been on the court for four months. During his Senate confirmation hearing, he had claimed a certain empathy for prisoners. He described looking out the window of his chambers at the Court of Appeals and watching prisoners being loaded into buses to be taken back to their cells. “I say to myself every day, but for the grace of God there go I,” he told the members of the Senate Judiciary Committee.

In his dissenting opinion in the Hudson case — which Justice Antonin Scalia joined, making the vote 7 to 2 — the new justice said that the Constitution’s framers “simply did not conceive of the Eighth Amendment as protecting inmates from harsh treatment.” The Eighth Amendment dealt with only the actual sentence, he maintained, and not with conditions inside a prison or deprivations that were not a formal aspect of the sentence. He said the Supreme Court had taken a wrong turn in the 1970’s when it adopted a more expansive view, and he added, “The Eighth Amendment is not, and should not be turned into, a National Code of Prison Regulation.”

Last month, Thomas demonstrated his grim “consistency” on this subject when the court considered “another excessive-force case, a prisoner’s appeal that was so clearly meritorious that the justices ruled in the inmate’s favor without bothering to call for briefs or hear argument.” This time, a North Carolina state prisoner claimed that “a guard had responded to his request for a grievance form by slamming him onto the concrete floor and then punching, kicking and choking him until another guard pulled the attacker off.” A lower court found that the prisoners’ injuries weren’t all that bad, and dismissed the case.

Because of the precedent set by the Hudson v. McMillian decision, Greenhouse writes, “The vote was 9 to 0, but it was not a happy 9 to 0. Justice Thomas, joined by Justice Scalia, concurred only in the judgment, not the court’s opinion. ‘I continue to believe that Hudson was wrongly decided,’ he said.” Thomas also noted that “no party to this case asks us to overrule Hudson”–suggesting that he would welcome the opportunity to do so. Greenhouse continues:

Justice Thomas has been trying and failing repeatedly to get someone to bring the court a vehicle for revisiting its prisoners’-rights jurisprudence. Dissenting from a 2002 decision, Hope v. Pelzer, he objected to reinstating a lawsuit brought by an Alabama inmate who had been handcuffed to a hitching post and left to stand shirtless in the sun for seven hours without water or bathroom breaks. “I remain open to overruling our dubious expansion of the Eighth Amendment in an appropriate case,” Justice Thomas wrote hopefully.

Greenhouse writes that there have been “no takers yet.” This is not surprising, since so many potential prisoner abuse claims are now effectively barred from the courts under the Prison Litigation Reform Act. As described by the SAVE Coalition, which advocates for a change to the PLRA:

In the past decade, individuals who have been physically and sexually abused, subjected to life-threatening medical mistreatment, denied the ability to practice their religion, and severely mistreated as children have been denied access to relief from federal courts. Why? These individuals were in prison when these violations occurred and the Prison Litigation Reform Act (PLRA) imposed insurmountable obstacles to judicial relief. In 1996, Congress enacted the PLRA, which was intended to stem frivolous lawsuits by prisoners, but too often denies justice to victims of rape, assault, religious restrictions, and other rights violations.

Because the PLRA demands that prisoners must suffer serious “physical injury” in order to sue in federal court, solitary confinement does not qualify–nor do a host of other abuses that cause physical and psychological suffering, but not “physical injury” in the eyes of the law. The law also demands that prisoners jump through a series of nearly impossible procedural hoops before their cases can be heard in even the lowest federal court, much less the Supreme Court.

Although she does not reference the PLRA, Greenhouse writes that “it could be a long wait” before the Supreme Court gets another Eighth Amendment case–but if it does, she says, “Justice Thomas will be ready.” 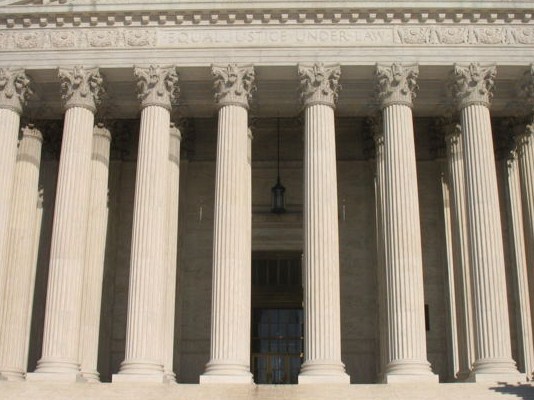