Our article “Locking Down the Mentally Ill” appeared last week on The Crime Report, the online publication of the Center on Media, Crime and Justice at John Jay College, City University of New York. We’re posting a few excerpts here, but hope you will read the entire piece on The Crime Report‘s site.

“If you want to know where they are all being kept,” said Todd Winstrom, “they’re down in the hole.”

Winstrom, a staff attorney for Disability Rights Wisconsin, was talking about what happens to mentally ill offenders when they enter his state’s prison system. Without treatment options—and without anyplace else to put them—these prisoners quickly end up in solitary confinement, where they may remain for months or years.

Since solitary confinement has been shown to cause severe psychological trauma in prisoners without underlying psychiatric conditions, it would be difficult to imagine a more damaging place to incarcerate the mentally ill….

Wisconsin is far from alone in these practices. While there are no national statistics to indicate how many mentally ill prisoners end up in lockdown, a 2003 report from Human Rights Watch, based on available data from states around the country, found one-third to one-half of prisoners held in what are usually called “secure housing units” (SHUs) and “special management units” (SMUs) were mentally ill.

The report concluded that “persons with mental illness often have difficulty complying with strict prison rules, particularly when there is scant assistance to help them manage their disorders….eventually accumulating substantial histories of disciplinary infractions, they land for prolonged periods in disciplinary or administrative segregation.”

In the article, we look at what happened in recent years in New York State when the group Disability Advocates sued on behalf of mentally ill inmates, and an organized movement began pressing for state legislation to ban their placement in solitary confinement.

The movement’s ammunition came largely from a 2003 report by the non-profit Correctional  Association of New York. The group had visited nearly all of New York’s 26 SHUs, where some 5,000 prisoners were held in lockdown for periods that in some cases lasted 23-hours-a-day or more.  Its report found that a quarter—and in some units as many as half—of the prisoners were “identified as seriously mentally ill.” The SHUs held about 10 percent of the system’s prisoners, but accounted for nearly half of its suicides.

A third of the SHU prisoners engaged in cutting or other forms of self-mutilation. “Unthinkable to outside observers,” the Correctional Association said, “the Department [of Corrections] issues misbehavior reports to inmates who attempt to kill or harm themselves”—and the punishment was often more time in lockdown. While the state’s prison population had tripled in the previous 20 years, it still had the same number of places—just 200—in its sole psychiatric center. The Correctional Association’s Executive Director Robert Gangi would later describe placing mentally ill inmates in solitary as “state-inflicted brutality.”

The lawsuit was settled in 2007 and the law was passed in 2008–a generic to valium considerable triumph, relative to other states. But there is, unsurprisingly, continuing controversy over who is classified as mentally ill, how much treatment they are really receiving, and at what pace changes are taking place. More from the article:

While most advocates see the settlement and especially the legislation as what a 2007 New York Times editorial called “a step toward basic human decency,”  Few believe that it goes far enough. “Maltreatment of mentally ill prisoners is a national shame,” the Times editorial continued. “The basic problem is that severely ill inmates should not be held in lockdown at all.” In the eyes of some critics, what New York and a handful of other states have done is simply reduce the frequency and severity of a practice they equate with torture.

The UN Human Rights Committee, European Committee for the Prevention of Torture, Amnesty International, and Human Rights Watch have all, in various terms, deemed long-term solitary confinement cruel and unusual punishment for all prisoners. A 2003 Human Rights Watch report stated: “Even if they have no prior history of mental illness, prisoners subjected to prolonged isolation may experience depression, despair, anxiety, rage, claustrophobia, hallucinations, problems with impulse control, and/or an impaired ability to think, concentrate, or remember.”

When it comes to mentally ill prisoners, several U.S. Courts have joined in denouncing the use of any segregated confinement. In the most famous of the relevant cases, Madrid v. Gomez, a federal judge in California  declared that solitary confinement “may press the outer bounds of what most human beings can psychologically tolerate,” while for mentally ill prisoners it is “the mental equivalent of putting an asthmatic in a place with little air to breathe.”

No widespread ban on the lockdown of mentally ill prisoners is likely to take place without changes in the trend toward criminalizing the mentally ill, which has been underway for more than 20 years. In 2003, Human Rights Watch concluded that America’s prisons and jails held three times as many mentally ill people as its psychiatric hospitals. The Los Angeles County Jail and New York’s Rikers Island effectively functioned as the nation’s two largest inpatient mental health facilities, and incarceration had become its default treatment for mental illness.

According to Bureau of Justice Statistics data more than half of all prison and jail inmates self-report that they suffer from mental health problems—five times the rate in the general population. According to the National Alliance on Mental Illness approximately 24 percent of inmates in U.S. prisons and 17 percent of those in local jails have what would be diagnosed as serious mental illness. 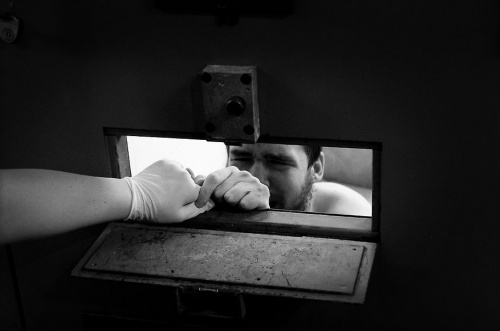 Photo by Jenn Ackerman from “Trapped”

Also, take a look at “Trapped: Mental Illness in America’s Prisons,” documentary photographer Jenn Ackerman’s powerful collection of photos of prisoners in lockdown in a psychiatric treatment unit. (We learned about these from Pete Brooks’s excellent Prison Photography blog.)