We are heartbroken to announce the passing of Solitary Watch’s founder and co-director, James Ridgeway. Jim died on Saturday at the age of 84, after a brief illness. Some of you were fortunate enough to know him personally. Anyone who has visited this site, read his other reporting, or learned about the travesty of solitary confinement—which was largely invisible to the public before he made it his life’s work—has been touched by him. He was the soul and spirit of Solitary Watch, and the hole he leaves behind is as big as his heart.

Exposing the torture of solitary confinement was only the latest phase in Jim’s remarkable sixty-year career in investigative journalism, which you can read about in this fine obituary for him in the New York Times. But though he had reported from all over the world and from the seats of power in Washington, he came to believe that it was the most important work he had ever done.

Jim never believed in the myth of “journalistic objectivity,” and he never hid how deeply saddened or enraged he was by the suffering and dehumanization that incarcerated people in this country are forced to endure. For Jim, these feelings were not abstract or theoretical—they were personal. And they were fueled in part by the direct contact he maintained with individuals in solitary confinement. 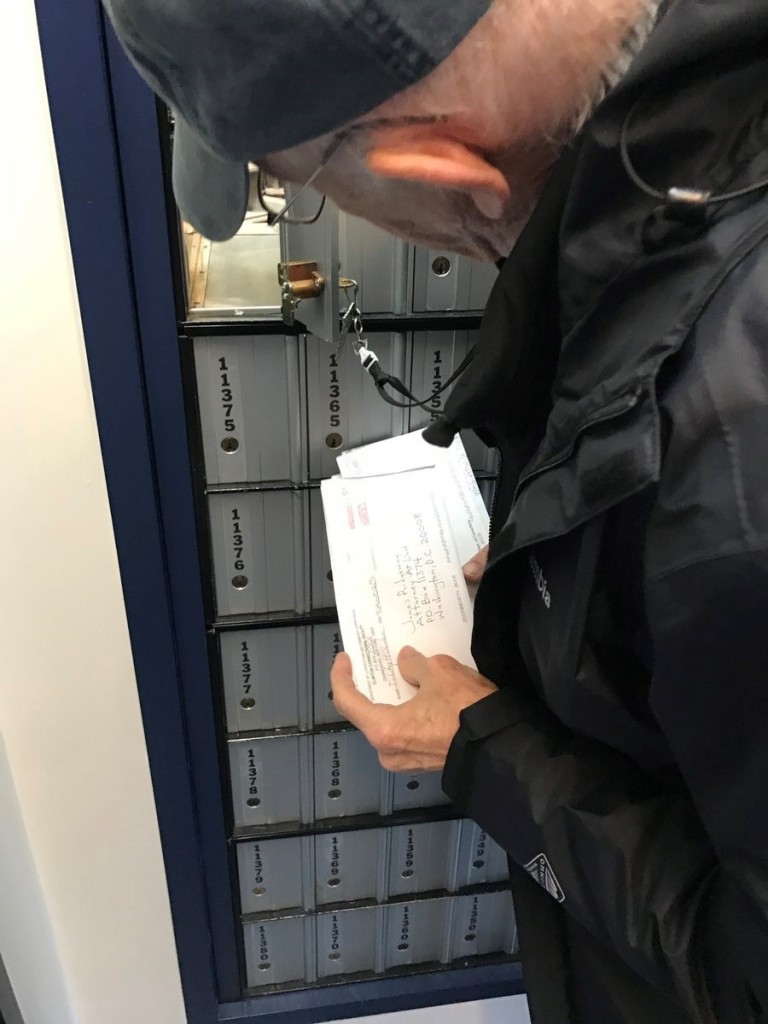 Jim’s friend, the journalist Jeremy Young, snapped this picture a few years ago as Jim picked up mail at the Solitary Watch post office box.

A 2016 piece in the New Yorker described how Jim (who was already in his seventies when he founded Solitary Watch in 2009), pushed his walker to the post office each week to pick up the dozens of letters written to him by people in solitary. More recently, as his vision failed, others (especially Valerie Kiebala, who became his eyes as well as his right hand), read the letters aloud to him and helped him respond. In an essay Jim wrote called “Letters from the Hole,” he described this correspondence.

There are so many letters now that I cannot possibly reply to most of them, even with a couple of volunteers to help. So I buy packages of cards, and gather up all the ones sent to me for free by wildlife groups as thank-you gifts for donations. I start sending people in solitary pictures of polar bears and endangered gray wolves, with just a few handwritten words: “Thanks for your letter. Stay strong.” They write back with a level of gratitude totally disproportionate to my lame missives.

A man writes me about the sound of rain in a drainpipe. It is his weather report. Another writes about the parade of cockroaches down the corridor at night, which he watches through the slot in his door, desperate for any sign of another living thing. Still another writes to thank me for the smell of perfume that he detected on an envelope containing a card. The smell lingers in his cell, he says, and fills him with dreams of the outside world…

Sometimes, now, I spend entire days reading letters from these people, these “criminals,” these models of human fortitude. I can’t do much of anything for them, except keep on reading…

Of course, Jim did do much more. And his commitment to humanity and justice for incarcerated people was not a day job for him; it extended to every corner of his life. Amid their deep mourning of his loss, Jim’s family wrote this beautiful message to be sent to the people he corresponded with in prison, knowing many of them will be mourning him as well.

We were fortunate to be at Jim’s side and hold his hands as he peacefully and gracefully departed this life. Our hearts are heavy following Jim’s sudden departure, yet they cannot help but mourn at the loss you must feel as well. For us he was a devoted husband, father, mentor, and inspiration. For you, he was a lifeline to the outside and a sincere, critical supporter of the issues that affect your daily lives. As his family, we want you to know just how remarkable and inspiring you were to him and how much he cared about you. On a daily basis we watched him toil away in his third floor office until late at night. When you called him, he would remind us how limited your ability to communicate was, and end our conversations to talk to you. Your personal stories and institutional issues lit his eyes and energized him even as his blindness, illness, and age progressed. He took every opportunity to raise awareness, even at family holiday gatherings. Solitary Watch was his passion, your cause his favorite topic. We want you to know that as his family, we are determined that his legacy of exposing the human rights issues of the incarcerated in the United States extends far beyond our mutual devastating loss. Our support to Solitary Watch and you endures.   —Pat, Dave, and Diane Ridgeway

I can think of no greater tribute to a man than to know that tears will be shed for him—not by the high and mighty, for whom Jim always maintained an appropriate level of disdain, but by people whom most of society has condemned and cast aside, who will mourn his death alone in their prison cells.

A memorial service will be held for Jim in safer times, most likely in the fall. His family has asked for donations in his memory to be made to Solitary Watch at this link. These donations will be set aside for a special memorial fund to be created in the future to support the work of incarcerated journalists, for whom Jim had the greatest admiration and respect. (This tweet was written on the day before his death.)

Cards and notes for Jim’s family should be sent to: Ridgeway Family, PO Box 11374, Washington, DC 20008. They will be greatly valued whether you know them personally or not.

Messages for me and the rest of the Solitary Watch family can be sent to jcasella@solitarywatch.org. We are doing our best to carry on through our overwhelming sadness, and your words of love and support are deeply appreciated. The work will continue, in his memory and in service of the cause we all share.