It was May 2020, and Esther Arias was finally going to be released from prison. For years of her 14-year sentence, she had held out hope that she would win her appeal and surprise her four kids one day by picking them up from school. But by the time her now-adult children came to the prison gate to welcome her home, her appearance had changed so much from lack of food and sunlight that they didn’t recognize her.

“My kids didn’t know it was me because I lost so much weight in the SHU,” Arias said, referring to the Special Housing Unit, one of the forms of solitary confinement used in the federal Bureau of Prisons, as well as in many state prisons. “I looked so pale. My friends were in front of the prison, telling the kids, that’s your mom. And my kids were like, that’s not our mom.” They set their doubts aside and got out of the car to hug her.

One of the most well-documented harms of incarceration is the way it tears families apart. More than 2.7 million children in the United States have a currently incarcerated parent, including 11 percent of Black children and 4 percent of Latino children. Incarcerated parents, who make up more than half the US prison population, often suffer mental health issues due to this separation. And an inability to maintain familial connections can significantly increase likelihood of recidivism after release. Parental incarceration also increases children and adolescents’ risk for a wide range of traumatic outcomes, including developmental delays, poor physical health, PTSD, and self-harming behaviors. This is especially devastating for the 60 percent of women in state prison who have children under 18, who were often primary caregivers for their children prior to incarceration.

But while all incarcerated mothers face barriers to remaining close with their children, mothers in solitary confinement often lose even their limited access to contact visits and phone calls with their kids. As such, the family separation issues endemic to incarceration are even more extreme for people in solitary.

In 2006, Arias’s last year of freedom, she had close relationships with her children, aged twelve, eleven, nine and six. She cherished going to church together, helping them with homework, and registering them for sports teams. Throughout her court proceedings, she was terrified of losing them. After she was incarcerated on fraud-related charges, her kids spent a brief period in foster care before being adopted by a cousin. Initially, they visited her once a month, but visits soon grew too time-consuming and expensive for her cousin’s family to maintain. Visits were especially difficult as Arias was moved around the federal prison system, spending significant time at FCI Danbury in Connecticut and the Federal Correctional Center in Philadelphia.

Arias was placed in solitary confinement on four different occasions. The longest, which lasted 90 days, stemmed from an incident report that she maintains was fabricated in retaliation for the public attention her long sentence drew. During her stints in solitary, visitation privileges and phone calls were extremely limited. She used her one phone call a month to explain to her children that she was in the Special Housing Unit. They didn’t understand what it meant.

“My older son had so much anger because he didn’t understand why everything was happening to me,” she said. “My kids have so much hurt.”

Arias’s family is not alone. More than one in five incarcerated women will spend time in solitary confinement over the course of a year. Research shows that women in prison are disciplined more harshly than men for the same infractions, and are more likely to be put in solitary for minor, nonviolent offenses such as “talking back” or making a face at a guard.

These various traumas can accumulate for mothers in solitary confinement, adding to the struggle to maintain relationships with their children. People in solitary are also often barred from programming, including parenting classes that could help them reestablish relationships and care for their kids upon release.

Leslie Credle couldn’t stomach the thought of her children seeing her that way: handcuffed, divided from them by an imposing Plexiglass shield, unable to reach out and touch their hands. For the eight months she spent in the SHU at the Massachusetts Correctional Institution in Framingham, Credle’s only contact with the outside world were one-hour visits in a bare, freezing room the size of a closet. Although Credle is a single mother and had close relationships with her children, aged 16 and 20 at the beginning of her incarceration, she couldn’t bear for them to visit for the entire time she was in solitary confinement.

Credle, who served a five-year sentence for federal drug-related charges, was held pre-trial without bail at MCI Framingham for the first year of her incarceration. Initially, she said, she was placed on “drug watch,” a particularly brutal form of solitary confinement in which a guard remains outside the cell door 24 hours a day. Credle’s clothes were confiscated and she was forced to wear a single-piece garment held together by Velcro, known as a “turtle suit.” Her handcuffs and shackles, which were on for 24 hours a day, bruised her skin. Her cell had no running water, blanket, pillow, or mattress, and the lights remained on 24 hours a day, preventing sleep. Any time she returned to her cell after using the bathroom, she had to bend down and cough on command.

Even when she was allowed off drug watch, Credle was placed in regular solitary confinement on suspicion of drugs, which she maintains was unfounded. Spending 23 to 24 hours a day thinking about her past mistakes and her faraway children, she often felt she was approaching a psychotic state.

Before each of her occasional visits from her father, Credle had to bend down so an officer could cuff her hands behind her back through a tiny slot in the door. “They act like they don’t want to get near you, almost like you have a disease,” she said, adding that she still has PTSD from her experience in solitary. “They tell you to step back like you’re this helter skelter person who’s going to do something to them.”

Credle still remembers the traumatized look on her father’s face as she came into the visitation room in handcuffs. As is standard in a non-contact visit, the bulletproof glass barrier between them blocked out sound, requiring her to speak with her dad through a speaker at the bottom of the glass.

Research compiled by the Urban Institute confirms Credle’s fears about allowing her children to visit her under these conditions. Non-contact visits can be deeply traumatic to young people, as can visits to high-security units where they may be subjected to invasive search procedures. Contact visits conducted in family-friendly environments, on the other hand, can promote emotional security, reduce anxiety, and increase academic performance for the children of incarcerated parents. But these positive visits are exactly the type of visits that women in solitary are denied. 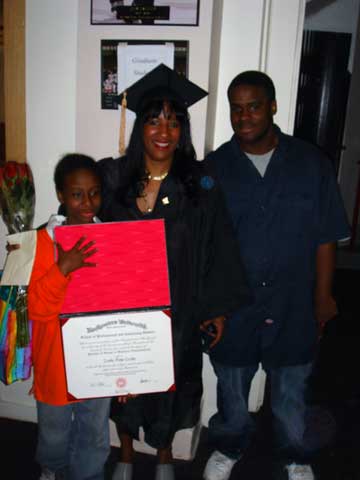 Leslie Credle with her children, Brianna and Amanni

Like Arias, Credle was allowed to make one 15-minute phone call each month in the SHU. Phone calls were, in her words, a “nightmare.” A sergeant had to pre-approve a designated call time, and if her children weren’t available then, she had to wait another month. If she managed to reach her two children, they would ask why she hadn’t called in a while. She couldn’t tell them the truth—that she was in solitary—because she didn’t want to scare them.

“You try to sound like you’re okay for them, but it kills you,” she said. After hanging up, she would hold back tears for the rest of the day. “When you get back to your cell, you don’t want to come out.”

Before her incarceration, Credle remembers herself as a happy, confident person, who held a good job, owned her home and possessed a Bachelor’s degree. But after she was released in 2017, she realized her experience in prison had fundamentally changed her. “There’s so much you’re angry about,” she said. “So many people you have left behind, that you know didn’t have a voice in there, and you become a voice for them.”

Unable to stop thinking about the women still languishing in prison, she became an organizer with the National Council of Incarcerated and Formerly Incarcerated Women and Girls.

During the pandemic, the work of advocates like Credle has become more consuming than ever. Before the coronavirus,  there were approximately 60,000 people in solitary confinement nationwide, according to a report from a coalition including the American Civil Liberties Union and the National Religious Campaign Against Torture. As the pandemic spread, 300,000 people in state and federal prisons were confined to their cells during lockdowns, a 500 percent increase in the use of solitary. This shift occurred even as advocates and medical professionals reached the consensus that de-incarceration was the best way to contain the virus—not lockdowns.

As a result of the pandemic and these failures of response, many more incarcerated mothers are now facing the barriers to family connection that have long afflicted women in solitary confinement.

Activist Dolores Canales, founder of California Families Against Solitary Confinement, told Solitary Watch that even as the coronavirus pandemic makes life more challenging for people in prison, it may increase empathy among those on the outside. As the public experiences social distancing and limited movement for the first time, people may be forced to consider the damaging psychological effects of isolation.

Canales knows these effects intimately; she was incarcerated for 20 years and spent 18 months in solitary confinement. She has also experienced the prison system from the outside, as a mother. Her son, who has been incarcerated since 1984, was in solitary from 2001 until 2016, when California incrementally reduced the number of people in isolation as a result of the Pelican Bay hunger strike and a related class-action lawsuit.

“Everything that is happening right now can be connected to what human life has been like for incarcerated people for decades,” she said.

Although Canales views this moment as a critical time to shed light on solitary confinement and incarceration, she is careful not to draw equivalences. Despite the steep challenges created by the pandemic, most people in the free world can still turn to support networks and other human beings. Canales urges people to imagine what life is like for those locked in dark and filthy cages, unreachable to the people they love most—including their children.

For mothers in solitary confinement, life will remain this way long after our collective isolation has come and gone. And even many of those who already survived solitary remain scarred long after their release date. Since Esther Arias’s May release, she has done her best to pick up where she left off with her kids: cooking together, going to church, and playing with her daughter’s new child, whom she affectionately refers to as her “grandbaby.” But she knows she cannot compensate for the last 14 years of their lives, no matter how hard she tries.