For much of this year, Solitary Watch has been working with Juan Moreno Haines, Senior Editor at the award-winning prison publication the San Quentin News. A recipient of a grant through our Solitary Confinement Reporting Project, he is now a Contributing Writer. Haines, 63, continued reporting even as he fought COVID-19 from a solitary confinement cell during the prison’s massive outbreak.

Recently, Solitary Watch began collaborating with the Guardian‘s Fight to Vote project to help Haines and his San Quentin News colleague, Kevin Deroi Sawyer, organize and report on a presidential vote within San Quentin. With just a few exceptions, people serving time in prison in the United States are not permitted to vote, and they constitute the nation’s largest disenfranchised population. Published in the Guardian earlier this week, this article by Haines and Sawyer describes how they organized and carried out their unofficial election, which gave the men of San Quentin a chance to make their voices heard.

Haines and Sawyer also interviewed several voters, and wrote up a short profile about each. There was not room for the full profiles to run in the Guardian, so we are publishing them below, following an excerpt from the article.  —Valerie Kiebala and James Ridgeway

“I want to be heard,” one man wrote on the back of a makeshift ballot in a simulated election held inside San Quentin state prison. Another wrote that he was voting because “I’d like to feel like a citizen; feel like I am important too.”

The total population of US prisons and jails is greater than all but four American cities. But with a few exceptions (Maine, Vermont and now Washington DC), citizens held in state and federal prisons cannot participate in the democratic process. In California, even people on parole cannot vote, though a measure called Proposition 17 could change that this year. The thousands of men in San Quentin do not worry about violence at polling places or missing mail-in ballots. We know from the start that our votes won’t count.

At least 1,600 men spend more than 23 hours a day locked inside windowless, 4ft x 10ft cells. The unventilated housing units, five tiers high, have their windows welded shut – perfect environments for the coronavirus to thrive. There have been more than 2,200 confirmed cases at San Quentin – three-quarters of the prison’s total population – and 28 incarcerated men have died. 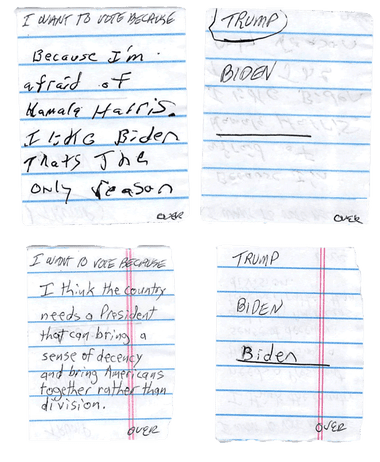 Some of the men incarcerated here were nonetheless given a chance to make their choices – and their voices – known through a mock election. The mock election goal: poll those held in the general population in north block and west block, who represent about 85% of the total population. To make it happen, on 1 October, Solitary Watch, which is collaborating with the Guardian to support our election and publish our story, mailed 800 ballots to north block and 800 more to west block. The ballots, delivered via express mail, have been sitting in the prison mailroom since 2 October. Calls from Solitary Watch went unanswered.

It was under these circumstances that 150 handmade ballots were passed out in north block on 10 October. Three days later, 170 more were smuggled into west block, accompanied by a note that read: “Since CDCR [California department of corrections and rehabilitation] is holding the ballots, we have to improvise.”

Every other day, about 160 of the 800 men on north block are let out of their cells for 90 minutes, tier-by-tier, until everyone on all five tiers gets a chance to shower in one of 10 (racially segregated) community showers and/or go to the prison yard and/or make a 15-minute telephone call on one of 12 phones, if sign-up slots are available. Voting took place during this time, and north block cast 103 votes.

On west block, ballots were hastily passed out and collected over a two-day period during brief cell unlocks. The first day, an impromptu lockup impeded the process, and on the second day a short medical quarantine placed the election in jeopardy. But 73 ballots were retrieved and tallied….

Read the full article at the Guardian. See below for profiles of six San Quentin voters. 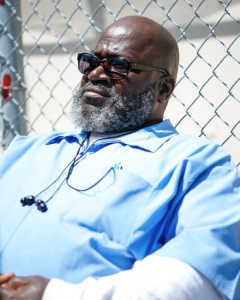 The mock election, Baylis said, gave him the opportunity to express the change he thinks the country needs.

“As long as there is inequality in America, there will always be a civil rights movement to fill those missing pages of history,” Baylis said. “The next U.S. President’s job is going to be the hardest seat to fill because so many things are left broken. To fill this seat everyone needs to help him. The republicans and democrats have to come together as one to fix this country.”

Before the global pandemic, Baylis worked as a peer-mentor for students seeking their GED. Now, stuck in his cell more than 23 hours a day, he reads and is drafting new GED lessons for “when things go back to normal.”

In the meantime, “I’m living scared, but safely,” Baylis said. “The public should care [about how I’m living] because COVID-19 don’t pick and choose who gets it—or who dies.”

He commented, “This is the first time in my 38 years of doing time that I’ve seen staff and inmates come together and care about each other. You could feel the compassion when someone died and felt the concern when someone got sick.” He then asked, “When we go back to normal, what’s next? How are we going to treat each other?” 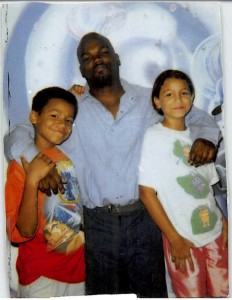 Alex Ross, 54, has been incarcerated 26 years. He voted for Biden.

“I want to vote because it is necessary that all voices be heard and to counter ethnic cleansing by way of prison,” Ross said. “I still go to work [during the COVID-19 lockdown], because I’m a cook, but other than that, the rest of my day is being confined to the cell.”

Ross wants the public to know that the COVID crisis in San Quentin was caused by prison officials. “They are treating us like we caused the problem,” Ross said. “Their attitude is bitterness towards us.” 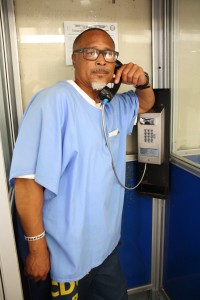 Brian Asey has been incarcerated 22 years. He voted for Biden. He’s never voted before.

“I want to vote because I want to change our city officials because they are the ones who can make a difference in my community,” Asey said. “The President is too busy lining his and his base’s pockets with money to care about anything else…He don’t care about the people, he only cares about making money.”

Before COVID-19, Asey worked in the prison’s media department as a filmmaker. “I was in the process of producing a piece—the documentary I’ve been working on the past two years was finally coming together, ‘Growing Up Behind Bars’,” Asey said.

“I want the public to know that I’m living in some of the worst conditions known to man, yet, I’m still doing mentally better than most people in the free world. CDCR might have my body incarcerated but my mind is free as a bird.” 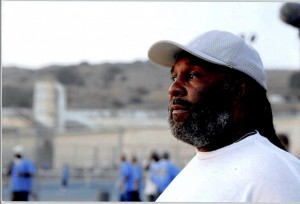 Charles Ross, 58, has been incarcerated 16 years.

Before COVID hit San Quentin, Ross attended self-help groups and played drums for “Just Us,” one of the prison bands. Now, he sits in his cell, reading and “messing around” with a drum machine.

He calls Trump, “a very confused man.” Ross says people need to talk more and “we got to respect other people’s feelings.”

The next U.S. President, Ross says, should work towards prison reform and “to help fix our police situation against people of color.”

Daniel James Longorio, 48, is one of the few Trump supporters in North Block. He said he last voted “many years ago.”

Longorio expects the next U.S. President to “fix the economy, fix the courts, build the defense up of the country and borders and reform the prisons as well as give free COVID-19 medication to all Americans in the U.S.”

Citing Biden’s age, he said, “He’ll be dead, sorry to say, then the ex-DA would be in charge,” adding, “Trump’s a businessman from jump-start—a good businessman, period…Trump’s done or had tried to do all he said he was going to do—no help from Nancy or her ilk, the Dems in Congress, etc.” 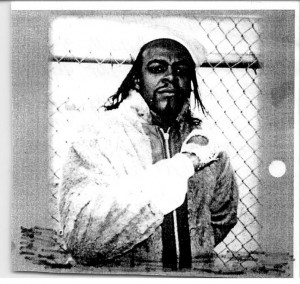 Steven Owens, 57, has been incarcerated 33 years. He appeared before the parole board last September and was told to come back in three years—it was his tenth time asking for a release.

He chose Biden in the mock election. “I have never voted,” Owens said. “I got locked up as a young man and back then, I felt like my vote didn’t matter, which is true. Lock me up and take my voting rights.”

“What I have viewed about our leadership, simply put—there is none,” he said. “If Trump [wins], it’s four more years of his chump dictatorship. If Biden wins, most of his time will be spent cleaning up chump Trump mess.”

The public needs to know “we are not all sentenced to death,” Owens said. “Yet, we have been dying in here like nobody’s business. [CDCR] needs to release all of us who are overdue for release.”

Solitary Watch’s ongoing work with incarcerated writers depends on the support of our readers. Please consider making a donation today. Now through December 31, your gift will be matched in full!

One thought on “At San Quentin Prison, Men Ravaged by Covid-19 and Decades of Incarceration Hold an Election of Their Own”