"Man Down:" Left in the Hole at San Quentin During a Coronavirus Crisis
An Award-Winning Incarcerated Journalist, Now Infected and Isolated Himself, Reports on the Deadly Contagion at California’s Famous Prison

Editor’s Note: Juan Moreno Haines is a journalist incarcerated at San Quentin State Prison, editor at the award-winning San Quentin News, and member of the Society of Professional Journalists. In February, before the pandemic visibly hit the United States, Haines wrote a prescient piece that was published in The Appeal—and supported by a grant from the Solitary Confinement Reporting Project—documenting how San Quentin officials used a solitary confinement block to house people sick with the flu, instead of providing the necessary medical care. Since the pandemic has spread, Haines has reported the increased use of solitary confinement to house people sick with the coronavirus. Many of the practices at San Quentin directly contradict advice for the management of contagion in correctional facilities provided by Amend at UCSF and other experts. 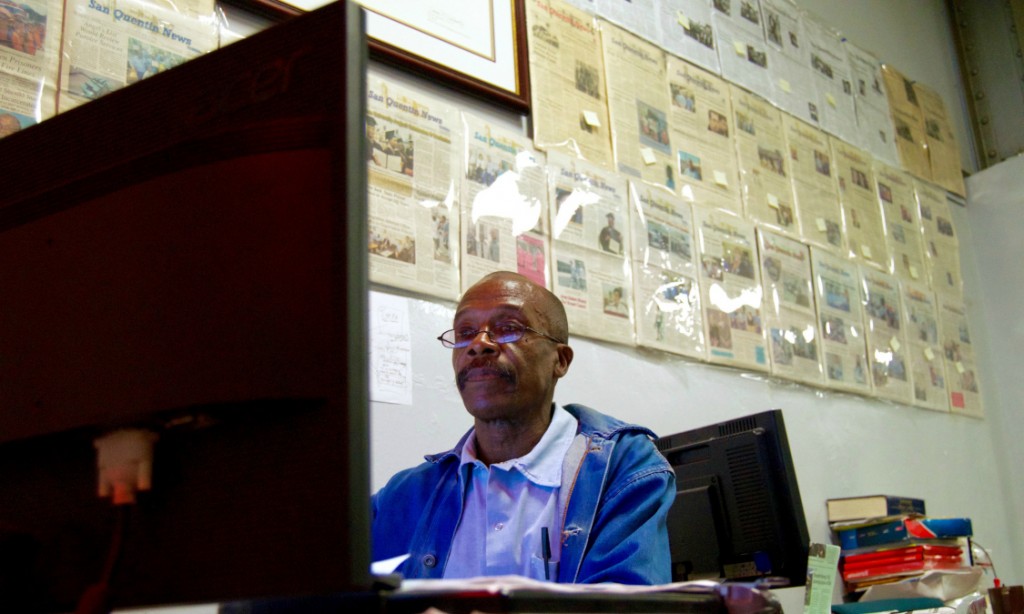 Juan Moreno Haines at work at the San Quentin News.

Over the past three months, Haines has provided Solitary Watch with a series of “Inside Updates” describing the conditions at San Quentin during COVID-19, which we have been publishing on social media. The writings illustrate the predictable spread of the virus at such a highly overcrowded facility, where social distancing is impossible, PPE inadequate at best, and people are shuffled from one overpopulated unit to another. The fate of those held at San Quentin was sealed in late May, when the California Department of Corrections and Rehabilitation (CDCR) chose to transfer in more than 100 men from the California Institution for Men in Chino, where the virus was rampant. As of July 6, more than 1,400 individuals at San Quentin, including 165 staff, had tested positive for the coronavirus.

Haines himself has now tested positive and has been moved to the Badger Unit, a solitary confinement block used to hold people sick with the virus. After the COVID-19 outbreak hit San Quentin, people on the Badger Unit organized a hunger strike, demanding basic rights, such as hot meals, fresh air, exercise, showers, phone calls, and mental health care. The audio file included at the end of this post contains excerpts from a recorded conversation between journalist Emily Nonko and Juan Haines on July 1.

Yesterday, CDCR announced the replacement of its chief medical officer, and singled out for criticism his decision to transfer people from Chino to San Quentin. Governor Gavin Newsom also publicly stated that the outbreak in the state’s prison system was a “top priority,” and that he “hoped” to reduce the number of people held at San Quentin from approximately 4,000 to 3,000 in the coming weeks. For the six incarcerated people who have already died at San Quentin (statewide, the number is 28), it is already too late.  —Valerie Kiebala

Prisoners’ greatest concerns: Since rehabilitative programs are suspended, good-time credit earning is impeded, which extends prison time. Court cases for re-sentencing are in limbo. Families cannot be together in the visiting room. Phone access is reduced. Yard time is reduced. Access to religious services reduced.

Two men must spend 20-24 hours a day inside a 4′ by 10′ cell if he does not have an approved job (in food service, healthcare, canteen, or packages).

“I need seven volunteers to work in the gym,” a correctional officer asked over the unit’s PA system.

Before the coronavirus shut-down, the gym’s morning hours were filled with prisoners taking rehabilitative classes. At night, they watched TV, played basketball, ping-pong, card games. There were guitars and keyboards, haircuts, and guys sitting at the stainless steel tables studying their parole plans—what they’d do on the other side of the wall.

The day before, a heavy-duty flatbed truck drove up to the gym. Its sideboards topped with the battleship-gray three-inch twin sized mattresses that all California prisoners sleep on.

All week, older inmates housed in the prison’s dormitory moved into North Block, where 759 prisoners reside in 414 cells. That’s 183 percent of designed capacity.

On April 21, San Quentin’s warden and top medical administrator issued a joint memorandum to “all concerned,” stating that on April 16 every staff member and prisoner would be issued two prison industry produced (Calpia) “cloth face barrier/masks.”

Upon issuance, the memo said, staffers are to wear the face coverings, at a minimum, while on institutional grounds. Prisoners are to wear face coverings when outside their cells with the exception of eating in the dining hall or in the shower area—everyone is to maintain social distancing.

Meanwhile, Ronald Lum spoke on April 13 about being transferred from H-Unit Dorm to the prison’s gym. “The only thing they cared about was if you’re healthy,” Lum said. “There’s no power, no phones—there’s nothing in there. It’s bad. They told us that the order came from Sacramento.”

A source who works in the same dining hall that prisoners housed in the gym eat in said that on May 7, he was told that there’s now one phone in the gym. There are now two televisions in the gym as well.

On May 7, 108 prisoners occupied the 112 single-man cots in the gym. The cots are placed in two rows of four with 30 inches between beds (side-by-side), head-to-head space is twelve inches. Six feet separates fourteen pods of eight-beds each.

According to a May 1 official “program status report” (PSR), all prisoners in the gym were placed on “medical quarantine status to manage the exposure to influenza.” Prisoners housed in the gym were allowed limited dayroom activities in common areas. “A maximum number of ten individuals, to be monitored by staff, who will enforce social distancing (recommended six feet with no physical contact).”

Around mid-April, prisoners were moved from San Quentin’s dormitory, H-Unit, into the prison’s gym. Cots are set up in two rows of four with 30 inches between cots (side-by-side). The head-to-head space is 12 inches. Six feet separates 14 pods of eight cots each.

There are three telephones for prisoners to call friends and family. However, since May 30, prison officials disallowed the use of one phone, based on “social distancing” reasoning. Access is first-come-first-serve.

Anthony Torres, 27, says at breakfast and dinner, prisoners sit four at a table, which “really defeats the purpose of social distancing.” Torres continues, the dayroom is sectioned off with signs and red X’s made of tape. The cots are too close to practice social distancing. Prisoners will get a rules violation for not wearing a mask in the dayroom; however, as for correctional officers (COs), “The COs sit at a desk, six to seven people crammed together with no mask.”

Tijue McGhee, 47, has been incarcerated eight years for first-degree burglary. He’s scheduled to parole on August 28, 2021.

McGhee says before being sent to the gym, he was quarantined from May 1 to May 8 and twice tested for COVID-19.

McGhee says the difference between the gym and H-Unit is access to electrical power for “TVs, fans to dry clothes to keep them from retaining mildew odor, adaptors for CD players and tablets.” Torres added that in H-Unit partitions between bunks and showers give prisoners privacy and distancing that they do not get in the gym.

“I’m a nonviolent inmate who has programmed and obeyed every rule set in place,” Torres said. He qualifies for non-violent offender early release, but his application was denied three times.

“No one has been violent towards any staff. No one has disobeyed any order or rule,” Torres said. “Why do we have to keep being restricted when Marion County is almost at Phase 3? Please help get notice of our living conditions. I have a wife and two kids. I’m trying to go home.”

On June 11 at 7 am, a North Block correctional officer announced over the PA system: “After chow (breakfast), North Block will be on First Watch Status. There will be no work, no yard, no phones.”

However, prisoners working on the mattress and furniture factories went to work. The cell doors were not double-locked and the tier gates remained open. Prisoners were escorted to medical passes.

Due to the recent number of patients that have tested positive for COVID-19 at our institution, CDCR has received a court order to test all San Quentin staff for COVID-19.

After testing positive for the coronavirus, Juan Haines spoke with journalist Emily Nonko over the phone, in a conversation shared with Solitary Watch. Click on the link below to listen.

This is the exact reason why people who are incarcerated at San Quentin are reluctant to cooperate with the medical authorities because when we do, if we say that we’re sick, then they put us in places like Badger. Now there’s people over there that under COVID-19, you know, they wouldn’t take the test because they knew if they tested positive, the chances of them receiving medical attention is zero.

The medical attention they’ve given me after testing positive for COVID-19 is that they locked me into a cell, they give me cold meals (for every meal). I can’t even heat up water, if I wanted to heat up the meals that they’re giving me. There’s no mental health services at all…

The real issue in North Block…is that it’s 180 percent over design capacity. There’s just too many people in prison. There’s people in this prison that’s been here for 10, 15, 20, 30 years, in their sixties and seventies…Yet, they’re still playing these political games with these guys and not releasing them…

The hunger strike that’s going on right now, I’d say there’s probably about a dozen, two dozen guys that are refusing all food because of the conditions here in Badger section. And basically, what they’re asking for is hot meals, they want mental health checkups, they want exercise and fresh air, they want to be able to take showers, and to make phone calls to their loved ones. That’s all they’re asking. We have COVID-19, and all they’re doing is passing out Tylenol.

[Nonko asks, “What happens if you’re in Badger, in solitary, and you start to have a serious shortness of breadth or you need to have immediate medical attention?]

Then, somebody would call, ‘Man down.’

That happened earlier today. It took them about nine minutes to respond. I have no idea what the real issue was but it sounded like it was a suicide attempt. That may or may not be true. I don’t know. It was a guy who was supposed to be released from prison today.

Now I know what it feels like to be punished for being sick. I really wish that the administration would treat us like patients. And if we’re treated like patients who have a disease, then that’s how we would feel. But we don’t feel like that. We feel like we’re being punished because of this disease, and the people who are in charge of our lives, who are supposed to be our overseers to our lives are just incompetent. Because the people who are making decisions aren’t coming to talk to us—whoever they’re talking to—they’re not representing who we are.

Thanks to Emily Nonko for her ongoing assistance and her role in helping to make public these dispatches from inside San Quentin.

Our work with incarcerated journalists is made possible by support from our readers and from the Vital Project Fund.

2 thoughts on “"Man Down:" Left in the Hole at San Quentin During a Coronavirus Crisis”