Local Jails Were Death Traps Even Before COVID-19. The Pandemic Demands Sweeping—and Permanent—Change.

The following piece originally appeared in the Opinion section of The Guardian on March 30.

On Wednesday, March 18, while New York was emerging as the national epicenter for the novel coronavirus, a desperate message was dispatched from the city’s notorious Rikers Island. “A storm is coming,” tweeted Dr. Ross MacDonald, chief medical officer for the city’s jails, in a frantic plea for action from local officials. “I know what I’ll be doing when it claims my first patient. What will you be doing? What will you have done?”

By the end of that day, one corrections officer and one person jailed on Rikers had tested positive for COVID-19. Ten days later, the number of those infected in New York’s jails had risen to 104 staff and 132 incarcerated people. [As of April 12, the combined total was nearly 800.]

More than two months after the first confirmed U.S. case, some portion of the public and the press seems finally to be grasping a chilling truth: Unless something changes, our teeming jails, prisons, and detention centers—which hold more than 2.2 million people, more than all but four American cities—will likely witness mass casualties.

With large numbers of people locked together in close quarters, living in often unsanitary conditions without the ability to wash their hands or clean their surroundings, these facilities are “petri dishes” more deadly than any nursing home or cruise ship.

The high turnover rate in the nation’s more than 3,100 city and county jails—where there are over 10 million admissions in the course of a year, and the average stay is less than a month—renders them particularly susceptible to contagion. “This is basically a system designed to spread communicable disease,” said Dr. Homer Venters, Dr. MacDonald’s predecessor on Rikers, in an interview with the New Yorker.

What makes the situation even more perilous is the fact that the high rate of preventable deaths in local jails was already being called a public health crisis and an epidemic, long before the advent of COVID-19. Of the 1,071 jail deaths—an average of three a day—reported by the Bureau of Justice Statistics in 2016, nearly a third were suicides, while others were homicides (by both jail residents and staff) and overdoses. Only half were caused by illness, often exacerbated by inadequate medical care, much of it provided under contract by private companies.

The low value placed on the lives of the average 615,000 individuals held in our local jails reflects their status as some of the country’s most vulnerable and marginalized citizens—people who have simply fallen through the holes in our frayed social safety net. Three-quarters are awaiting trial and remain in custody because they cannot afford bail or have nowhere else to go. Others are serving short sentences for low-level, nonviolent drug, property, and “nuisance” crimes. They are disproportionately likely to be poor, to be people of color, and to be struggling with the effects of chronic medical conditions, trauma, addiction, cognitive and developmental disabilities, or untreated mental illness. For far too many of them, a short stint in jail becomes a death sentence.

These people are treated as expendable even in normal times. What will happen to them at the height of the pandemic, when there are shortages of oxygen, respirators, and hospital beds?

“My worry is that there will be two standards of care,” Dr. Venters said. “That incarcerated patients with one set of symptoms may be denied access to hospitals, even though in the community people with the same sets of symptoms do go to the hospital. And then that will lead to different rates of deaths and certainly to different rates of preventable deaths among people who are behind bars.”

From a public health and public safety standpoint, the solution to this crisis is quite simple: Let them go.

A majority of the people in American jails can be released without danger to society, especially if they are connected with mental health, drug rehab, and other needed services. In fact, releasing people now, before the virus spreads throughout jails, would decrease the likelihood of people later carrying COVID-19 home to their communities, saving lives other than their own.

Confronted with this grim scenario, some jail systems have slowly stirred to action. Los Angeles County, the nation’s largest jailer, has released 1,700 of the approximately 17,000 people in its jails. Some smaller city and county jails from Maine to Alabama to Ohio to Oregon have reduced their populations incrementally by lowering or suspending bail requirements, releasing people to home confinement, and ceasing to admit new individuals arrested on minor charges. Even President Trump announced on Monday that he was considering a release of elderly, “totally nonviolent prisoners” from federal prisons—though at the same time, the Justice Department made plans to extend the custody of others.

Most of these measures have been far too timid and halting, carried out by politicians who have yet to shake the perennial American fear of being labeled soft on crime. With each passing day of inaction, they are effectively handing out death sentences.

In New York State, where bail reform measures passed last year have been under attack by prosecutors and police, Gov. Andrew Cuomo—heralded as a Trump foil for his rapid, decisive response to the state’s massive coronavirus outbreak—is still considering rollbacks that would confine more people to jail. By March 27, as the virus spread on Rikers Island at an infection rate more than seven times higher than the rest of New York City, the governor and mayor finally decided to release nearly 1,000 people from the city’s jails—leaving approximately 4,000 others behind.

We need release plans for our jails that are far more bold and sweeping—and when the worst of the contagion has passed, we need to make them permanent. For any who remain behind, we need humane and rehabilitative programs that take into consideration the impact of mental illness and addiction, as well as poverty, racism, and other socially wrought traumas. Otherwise, the death toll will simply return to pre-pandemic levels, which should be anathema to any civilized society.

As COVID-19 lays bare our larger failings as a nation, perhaps we will come to recognize local jails for what they are: places where extremes of economic inequality combine with heartless social welfare policies and a viciously punitive and intrinsically racist criminal justice system to create a vortex of misery and of unnatural, preventable deaths.

Opening the gates to our jails today could not only save countless lives, but also demonstrate to policymakers and the public that the practice of locking up millions of vulnerable people has always been destructive, cruel, unjust, and unnecessary. 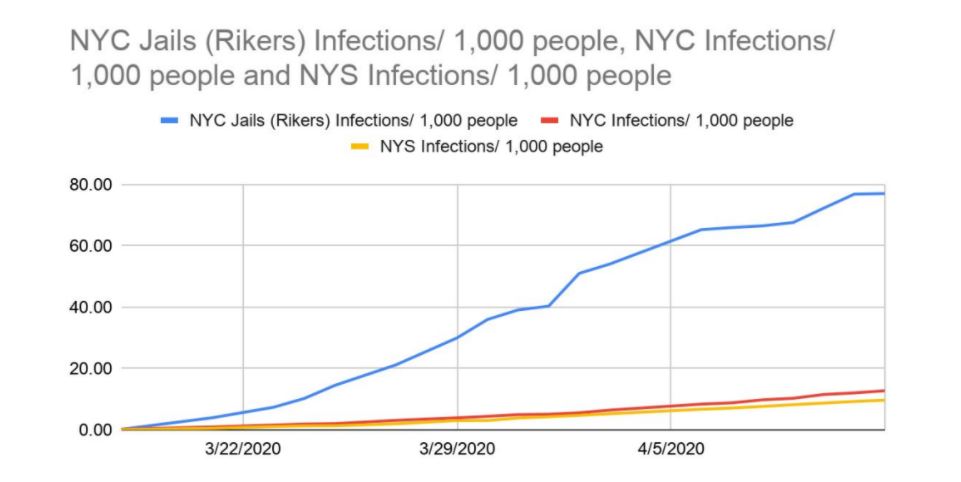