Shedding Light on the Interior Lives of Men and Women Held in Solitary Confinement Across the U.S.

Photo Requests from Solitary invites men and women held in long-term isolation in U.S. prisons to request a photograph of anything at all, real or imagined. Their requests are then filled by artists and volunteers who create the images according to the written specifications, forming an artistic collaboration that transcends prison walls. From whimsical to anguished, the images created through Photo Requests from Solitary form an archive of the interests, memories, and daily thoughts of just a few of the 80,000 people who live in extreme isolation on any given day in U.S. prisons and jails.

Brooklyn Public Library will host the first New York exhibition featuring photos and requests from all five states where PRFS has worked. Viewers at BPL are encouraged to fulfill open requests and will also have the opportunity to learn about the campaign to end long-term solitary confinement in New York’s prisons and jails. The site-specific installation of requests and the photographs created from them will be located in the Grand Lobby and second floor balcony of BPL’s Central Library.

On March 27, ahead of the official exhibition opening, Brooklyn Public Library will host a conversation between Albert Woodfox and Jelani Cobb on Woodfox’s memoir, Solitary, which chronicles his 44 years in solitary confinement for a crime he did not commit. Their conversation will also include a one-night preview of select images from the exhibition.

Photo Requests from Solitary will open to the public on April 20, with an opening reception taking place on April 23. At the reception, “The Wire” actor Michael K. Williams will present Raised in the System, a documentary examining mass incarceration of youth in the United States and the first episode of the new season of HBO’s news-magazine series “Vice.” Drawing on Williams’ personal and family experiences at the hands of the criminal justice system, the film also looks at the community members and organizations working on solutions to keep young kids out of the prison pipeline.

Photo Requests from Solitary and the corresponding public conversations around mass incarceration further the Library’s role as a vibrant space for discussions of significant civic issues. The exhibition and programming build on BPL’s history of addressing this critical topic, previously explored through exhibitions including The House that Herman Built (2013), a project by Jackie Sumell with Herman Wallace, who along with Albert Woodfox and Robert Hillary King made up the so-called Angola Three, a group of former Black Panthers who were held in solitary confinement in Louisiana for decades. BPL is committed to providing access to educational, economic, and cultural enrichment opportunities of the highest quality to the 2.6 million individuals who make Brooklyn home, offering nearly 65,000 free programs a year and resources that support personal advancement, build civic engagement, and strengthen the fabric of community.

The exhibition of Photo Requests from Solitary at the Brooklyn Public Library is supported by a grant from the Shelley & Donald Rubin Foundation.

For additional information on the exhibition and other events in the Freedom Index series, please visit: https://www.bklynlibrary.org/exhibitions/photo-requests-solitary

Brooklyn Public Library is the nation’s sixth-largest library system and among the borough’s most democratic civic institutions. We offer 65,000 free programs a year for people from all walks of life—immigrants learning a new language, students preparing for college, older adults seeking companionship, aspiring entrepreneurs launching their dreams, children discovering the world, and people of all ages exploring arts and culture. And we provide patrons 3.9 million opportunities to enjoy one of life’s greatest satisfactions: the discovery of a good book. Learn more at bklynlibrary.org

About Photo Requests from Solitary and Solitary Watch

Photo Requests from Solitary is currently led by Laurie Jo Reynolds, Jeanine Oleson, and Jean Casella, and is a project of Solitary Watch, a national watchdog group that has helped spark public attention, mainstream media coverage, and policymaking around the issue of solitary confinement. The project was started in 2009 by Tamms Year Ten, a grassroots campaign to close Tamms Correctional Center, the notorious supermax prison in Illinois. In 2013—the year Tamms was shuttered—PRFS became a collaboration with Solitary Watch and expanded to California and New York, where PRFS has partnered with the Campaign for Alternatives to Isolated Confinement in advocacy efforts across the state, including the push to pass the Humane Alternatives to Long-Term (HALT) Solitary Confinement Act. Last year, PRFS launched a site-specific installation in Philadelphia’s Eastern State Penitentiary focusing on prisoners in Pennsylvania and New Jersey, and a website that invites the public to browse open requests and create and upload images. 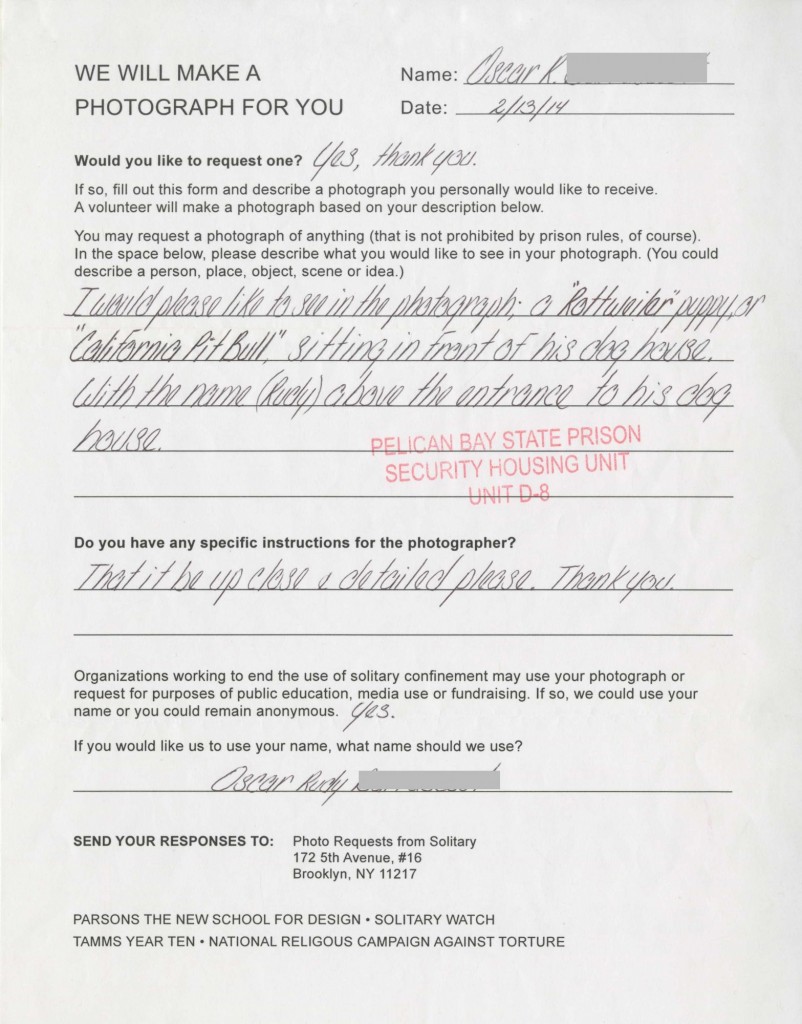 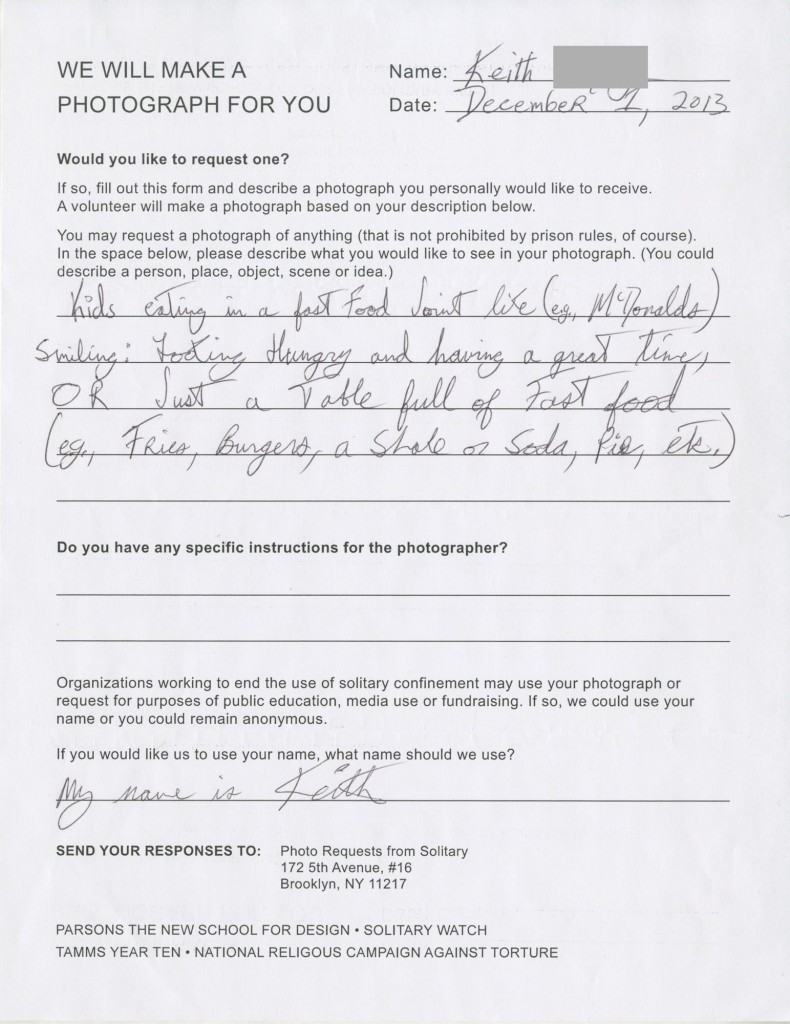 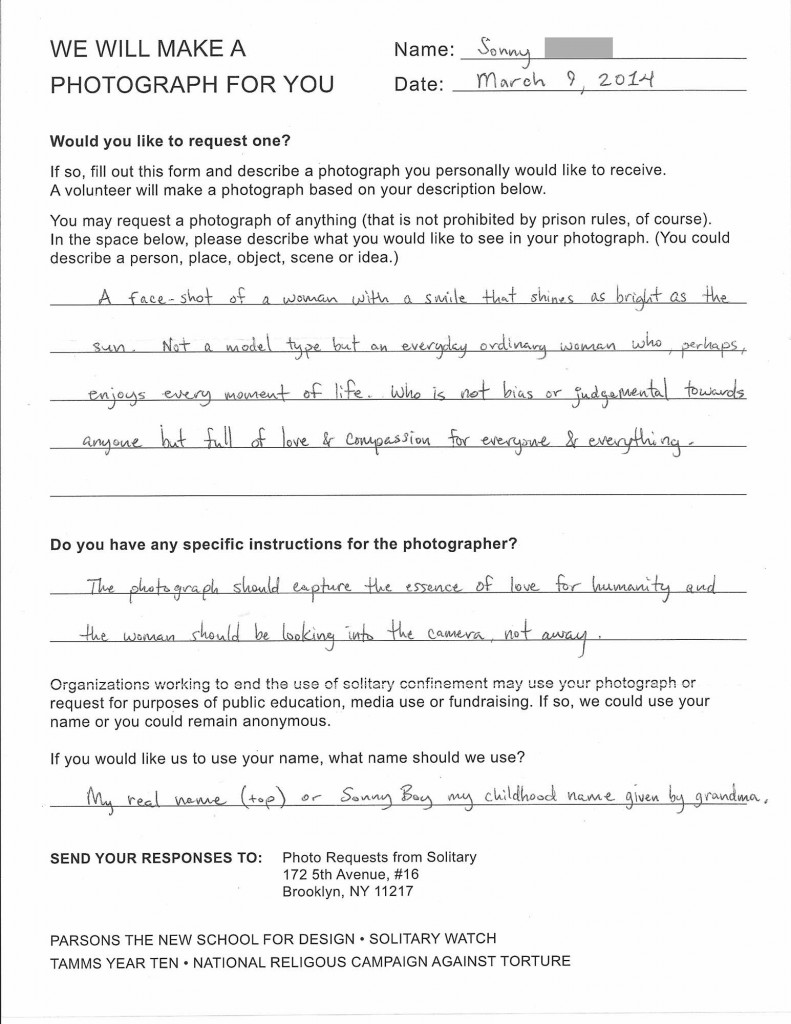 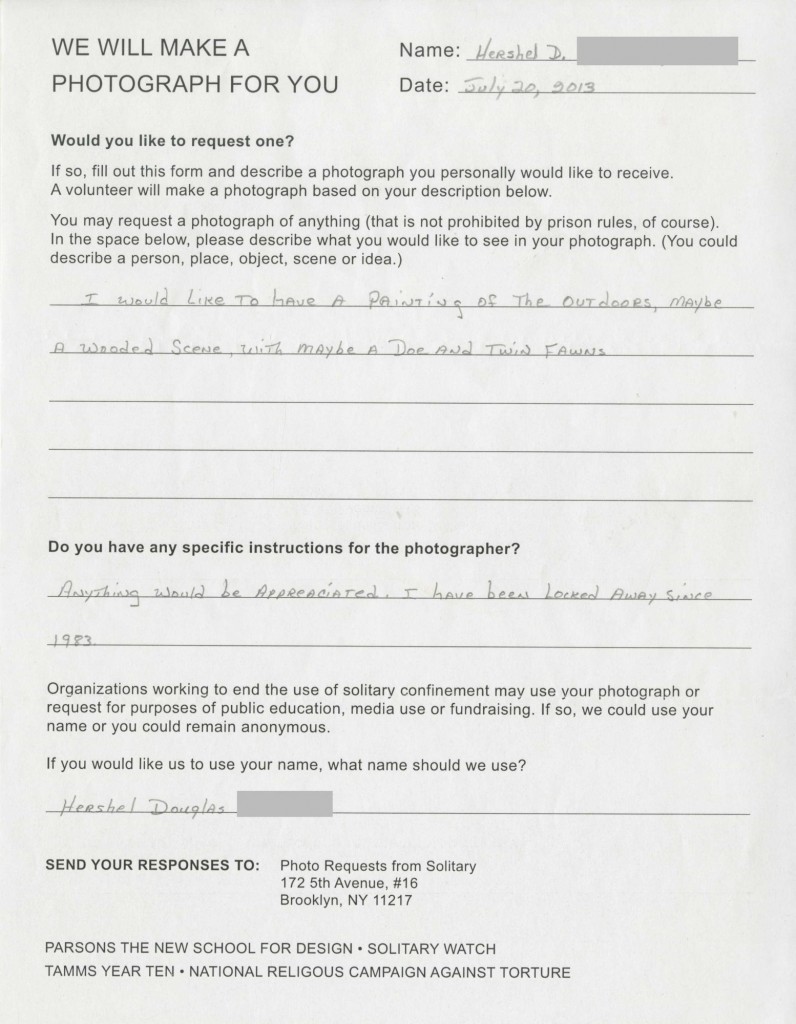 To view all 221 requests, visit photorequestsfromsolitary.org.

What They Wanted to See: Images for People in Solitary Confinement