Voices from Solitary: Women Held in Isolation in New York Speak Out

Although men far outnumber women when it comes to people held in solitary confinement, there are still thousands of women across the country in solitary as well, and their experience is often overlooked. According to the recent report Prison Within Prison: Voices of Women Held in Isolated Confinement in New York, in addition to the well-known psychological damage that isolation can cause to all human beings, women also face “other gender-specific impacts: retraumatization due to their trauma-histories; vulnerability to staff sexual misconduct; limitations on access to proper reproductive and other health care; and disruptions in their roles as mothers and primary caregivers. Isolated confinement exacerbates the dehumanizing treatment of women who already endure the punitive impact of incarceration.”

The report was produced by the Correctional Association of New York, a nonprofit criminal justice reform organization. It collects oral histories by women who experienced solitary confinement in New York State’s women’s prisons and on New York City’s Rikers Island. Most of the 20 women included are graduates of ReConnect, the Correctional Association’s leadership development program for formerly incarcerated women. All are members of the Coalition for Women Prisoners, a statewide body coordinated by the Correctional Association that fights for the rights of women impacted by incarceration. Several of the women worked with the graphic designer Troy A. Lambert/AfroBlu Designs to create the images in the report. The Correctional Association is among a coalition of organizations and individuals working to pass the HALT Solitary Confinement Act, which would severely curtail the use of isolation in New York’s prisons and jails and institute more humane and effective alternatives. Below are a few selected stories from Prison Within Prison. —Valerie Kiebala

“I have a mental health diagnosis. When I was at Bedford [Hills Correctional Facility] I had a psychotic break. My friend was in SHU. She had a mental illness and killed herself – she was suicidal and they didn’t watch her, even though she was telling them she wanted to hurt herself. So I tried to kill myself too. I was put in SHU for a week for protective reasons. It was bad. They took my dentures, my sweatsuits and some other personal items. I had a hearing and got a two 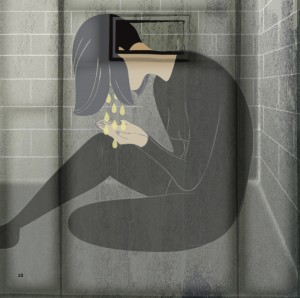 -month keeplock sentence. [Keeplock is being locked down and isolated in one’s own cell.] I was allowed to stay on my housing unit. The officers treated me pretty good. My friends were allowed to come by and sit and talk and offer support. That was better. As far as medical, I saw psych because of my issues and flashbacks, and a trauma program could come by and talk to me. The person keeping my children never let them come to visit – they felt it was bad for them. I could and did reach out to my children though. Once I was released from prison I never talked about my experience on lock. I hid it, blocked it out, because of what happened to my friend. It messed me up mentally, especially because she was telling them things about how she wanted to hurt herself.”

“I was at Bedford Hills on a violation. I had just given birth two months before. I had a bladder infection and medical permission to use the bathroom whenever I needed. I asked the officer if I could use the bathroom and she said no because someone was in there. I went anyway. It happened during the count time and they take count time seriously. I got a ticket for not complying with a direct order. The officer wasn’t one of the regulars and didn’t let me explain. She also said I spoke to her in a bad manner. I got ten days in SHU.”

““During breakfast in the mess hall pregnant women were a priority. Another woman gave me part of her breakfast. An officer rushed me to hurry up and move along. She
knocked the sandwich out of my mouth and hand, and I reflexively threw [cold] coffee in her face. A group of officers threw me hard onto the mess hall table on my stomach. I was taken out and put in an isolation cell for four or five hours. The captain came to ask me what happened and told me I should have eaten faster. From this cell I was moved to involuntary protective custody because the officer wanted to hurt me…I was stressed, depressed and scared. I didn’t know what to do. I was afraid because the officer was out to get me. I was concerned about the baby because of the way they slammed me on the table.”

“I initiated a fight. On the housing unit, everyone who knew the other person started to threaten me. I had a hearing and was sentenced to 20 days. My stuff was packed and I was sent to solitary. I was sent first, then the other person. It was the only time I had been alone in my entire life. The first couple of days I cried a lot, but soon created a routine – I would exercise before my shower. The walls had stuff like ‘Jesus was here.’ Showering was the most degrading. You need to be handcuffed through the slot and then walked to the shower. There was a gate from the floor to the ceiling at the shower, so you could be seen naked in front of people with men nearby. I’d take the quickest shower, put on a robe and get dressed in my cell. Hearing the women’s cries was hard, but I felt safer than I had throughout Rikers. I felt chilled to my soul by the crying, screeching, and yelling of the women who just could not take being confined. They 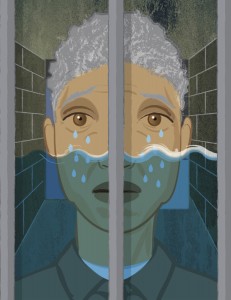 would cry all night, at three and four in the morning. It was seldom quiet in that area. I wouldn’t go to rec, so I got no breath of fresh air. At one point the chaplain came by and I was in a fetal position and crying. He asked if I was okay and I said that I wanted to die. He talked to me through the door, and I held fast to what he was saying, his words of consolation. The next day I started to lift. The days blurred into each other. I took a pen and calendar and wrote what each meal was. I still have that calendar and menu.”

“My ticket was for sleeping in the bed with my daughter. I was removed from the nursery to general population and put on keeplock. Because I was on lock, when my children visited, we couldn’t go to the play areas with the others.”

“I did ten days in SHU for having a ‘weapon’ – it was lock wrapped in a shirt. I didn’t intend to use it. I had it in my cell because I was being threatened by a woman on my unit. I received a 90 day SHU sentence but the woman reached her max-out date and was released, so I only served ten days. The first few days in SHU I slept and slept and slept. There was no one to talk to and I barely saw an officer. It took me a few days to get the routine. I had rec – they came around 6am. I went a few times and then stopped. There was no programming. I got a shower three times a week and I was cuffed to the door while in the shower. There was a person every two cells, so I couldn’t talk to the person next to me. A dead bug on the window became my friend. I asked for pen and paper, got it days later. I had no concept of time and I was confused about the days. Once I was home for good I became a hermit. I couldn’t be around people. It took me three years to make friends. This was because of SHU. I had been released from prison once before an 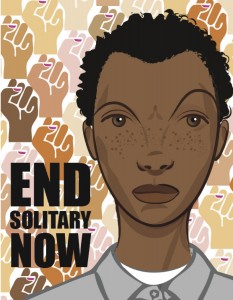 d I wasn’t like that. I have nightmares to this day. I also have a fear of being cuffed. I am scared of police brutality of any kind because I don’t want to be cuffed. I was cuffed while pregnant, cuffed while giving birth, and cuffed while showering. Women in isolation, we lose more of our humanity than we do just from being incarcerated.”

“Women’s situations should not be taken lightly. They are paying the price for the crimes they did. Women shouldn’t be violated while doing their time. Educate women. Have more programs where women can sit down and talk. More support groups. A lot of people don’t have strong support networks. Many are lost. Women need more empowerment groups.”