Psychiatrist Terry Allen Kupers is one of the nation’s leading experts on the mental health effects of solitary confinement. He is also a physician for whom healing and advocacy are inseparable, and the pursuit of justice is an integral part of his service to his patients. For the past forty years, those patients have included men and women in some of the darkest corners of the American prison system. Terry Kupers was among the earliest mental health practitioners to study solitary confinement, and to sound the alarm about the devastating effects of this uncontrolled experiment in extreme human isolation and sensory deprivation.

Terry Kupers is the author of a new book, Solitary: The Inside Story of Supermax Isolation and How We Can Abolish It, excerpted below, that combines stories from the frontlines of prison mental health care with comprehensive research, insightful analysis, and concrete recommendations for change. He is also a fascinating and compelling speaker, and next week in New York City, we are pleased to be joining him for two evening events. These will feature readings from his new book, as well as from our anthology Hell Is a Very Small Place: Voices from Solitary Confinement, followed by discussion. Members of the New York Campaign for Alternatives to Isolated Confinement will be on hand with petitions to sign and other opportunities to take action to end long-term solitary in New York.

Please join us on October 23 at the Brooklyn Public Library and on Tuesday, October 24, at the NYU Bookstore. Click here—or scroll down to the bottom of this post—for complete details. 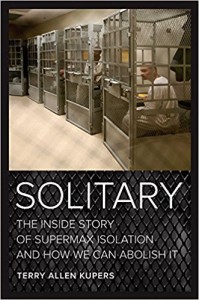 Rodney G. (I leave out his last name for confidentiality reasons), a twenty-four-year-old man imprisoned in the solitary housing unit at the Special Offenders Center (SOC) of the Monroe Correctional Complex in Washington, was on trial for felony assault on a corrections officer when I was enlisted by his attorneys in 2000 to examine him and render an opinion about his state of mind at the time of the assault. He had been in prison for four years, the last two in the supermaximum segregation unit at Monroe, and for the two months prior to the offense he’d been kept in four-point restraints twenty-four hours per day. Four-point restraints are straps to the wrists and ankles to tie a person down. Standards and protocols in psychiatry require this extreme form of restraint to be utilized only when less restrictive measures have been tried and failed and only for very short periods, a few hours. At Monroe, clinicians in the special psychiatric unit assumed that long-term restraints would cool down Rodney’s rage and halt his rule breaking. But the psychiatrist visited Rodney for only a few minutes once a week and didn’t have a clear grasp of the situation.  The restraints actually exacerbated Rodney’s feeling he was being disrespected, and his anger grew. Somehow he got loose from the restraints and proceeded to assault the next officer who entered his cell. In my interview with him, he told me that he didn’t know how he’d gotten loose, that he had nothing against that particular officer, and that he didn’t remember the whole event. He was prosecuted for felony assault on an officer of the law.

During Rodney’s trial, I testifed that prolonged isolation was diminishing his capacity to think and act rationally. I explained he suffered from the “SHU syndrome” (a term then in use to encompass the panoply of symptoms secondary to long-term confinement in isolation) and that the restraints he had been placed in had enraged him and driven him more and more mad (in both senses of that term). He had also been disoriented by massive sleep deprivation: the officers had been waking him every hour to adjust the restraints, the lights were always left  on, and he was never permitted to sleep for extended periods of time. In short, I testified that prison officials had been torturing Rodney, in violation of all corrections and medical standards regarding seclusion and restraint. I testified that the defendant, in that state of mind, could not have formed intent.  The jury agreed, stating that it was not fair for a prison system to drive people over the brink of insanity and then try to add time to their sentences for the crazy acts they were driven to commit.  The jury hung 9 to 3 in favor of acquittal.  The DA decided not to seek a new trial.

Rodney’s disciplinary record sheds some light on whether supermaximum units cause violence or constitute a necessary measure to control an increasingly violent population of felons. During the first year of his incarceration, Rodney had 3 disciplinary infractions. In the second year he had 6, including the one that led to his transfer to the supermaximum unit. During the next year, in punitive segregation, he had 63 infractions, and in the year leading up to the assault he had 139. When asked why he had so many infractions, Rodney responded: “Once they put me in a strip cell, I don’t know what happens, I just keep getting in trouble. . . . they never told me what I could do to get out, I believed I’d be in there forever.” A few days after the assault, Rodney was transferred to another facility where the staff  had no beef with him and where the associate superintendent took the time to listen to him talk about the ways he had felt disrespected by officers at the other prison. He was then placed in the general population. Tellingly, he proceeded to have no infractions for the subsequent year.  The fact that the defendant received no further write-ups after being transferred out of the SHU suggests that he, like so many others I have examined, was capable of getting along and programming successfully as long as he was not kept in an emotionally devastating environment.  Once a culture of punishment takes hold and the staff  feel that they need to respond to each new unacceptable behavior on the part of prisoners with further punishments, and once the interactions between staff and prisoners become predominantly punitive in nature, the punishments become more severe and the effect too many times is more emotional harm to the prisoners, in many cases including suicide. 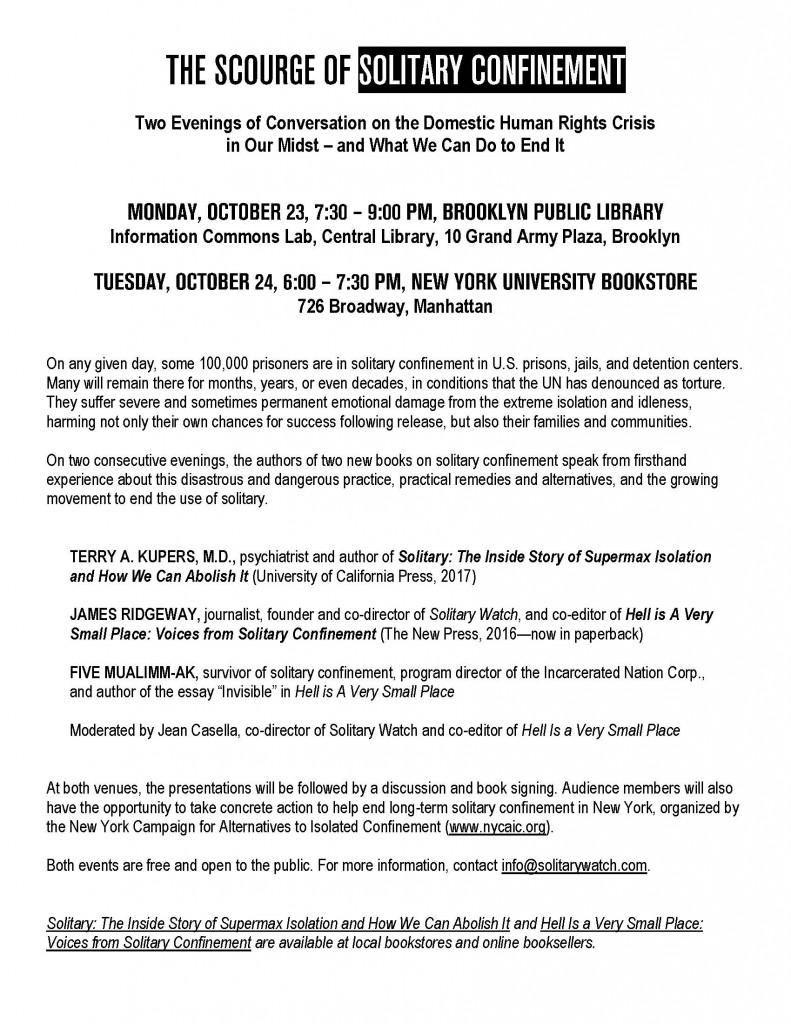