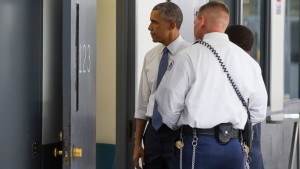 President Obama examines a cell at the El Reno Federal Correctional Institution in Oklahoma in July.

More than 100 organizations from across the United States sent an open letter to President Obama Friday calling for the elimination of long-term and indefinite solitary confinement.

The signatories – including civil and human rights groups, religious organizations, and groups of defense attorneys and mental health professionals – ask the President to take quick and decisive action following the attention he gave the issue earlier this summer.

We applaud your recent historic remarks recognizing that solitary confinement does nothing to rehabilitate those who are incarcerated. We also welcome your announcement that the U.S. Attorney General will conduct a national review of the practice in prisons and jails across the United States. We are writing to urge that this review result in recommendations that create a clear pathway toward the elimination of the use of long-term and indefinite isolation in the United States.

In a speech in July to the NAACP, Obama said he has asked Attorney General Loretta Lynch to start a review of the overuse of solitary in US prisons. “Social science shows that an environment like that is often more likely to make inmates more alienated, more hostile, potentially more violent,” Obama said. “Do we really think it makes sense to lock so many people alone in tiny cells for 23 hours a day for months, sometime for years at a time?”  The speech was the first time the issue was ever directly addressed by the President.

The open letter to Obama highlights a number of government reviews of solitary that have already shown the overuse and abuse of solitary, including two congressional hearings, a report by the Government Accountability Office and an audit of the federal Bureau of Prisons (BOP) earlier this year.  The BOP audit was criticized for its significant limitations, but did call for modest reform of the practice, including eliminating its use for people with serious mental illness and as a form of protective custody, as well limiting the amount of time people can spend in solitary.

The signatories of the letter call on the President to immediately implement the auditors’ recommendations and ensure that the national review prioritizes humane alternatives to solitary.

A sampling of the 126 organizations that signed the letter include the American Civil Liberties Association, the American Friends Service Committee, the Muslim Justice League, branches of the NAACP, the National Council of Churches, the National Religious Campaign Against Torture, the Southern Poverty Law Center, and various Innocence Projects.  In the letter, they emphasize the well-documented harmful effects of solitary on individuals, prison staff, and communities.

Neuroscience, ethics and international human rights law widely consider solitary confinement a form of torture. Indeed, decades of research demonstrate the harms of solitary confinement on human beings. Its systematic and widespread use in our criminal justice system compromises our stated commitments to human rights, human dignity, the human potential for redemption, and public safety.

The letter notes that a number of jurisdictions, including some states, have implemented policies to limit the use of solitary, such as bans for youth, pregnant women, and individuals with mental illness.   The letter says that supporting these reforms and creating incentives, as well as reform in the BOP, should be an explicit goal of the Attorney General’s review.

The organizations urge quick action, noting that the review should be completed with enough time to allow for implementation of the recommendations, with just over a year left in Obama’s presidency.

“The torture of prolonged solitary confinement compromises public safety, increases recidivism, is immoral and indeed has no place in any civilized society. Now is the time to act to ensure it has no place in our own,” the letter concludes.

One thought on “In Open Letter to President Obama, Groups Push for Solitary Confinement Reforms”