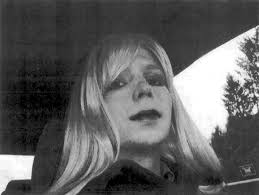 Update August 19, 10:45 am:  Chelsea Manning was found guilty at her disciplinary hearing on Tuesday but avoided a sentence of solitary confinement. “I was found guilty of all four charges at today’s board; I am receiving 21 days of restrictions on recreation – no gym, library or outdoors,” announced a tweet from her official Twitter account.

The guilty finding will also have long-lasting negative consequences, she said. “Now these convictions will follow me through to any parole/clemency hearing forever,” she tweeted. “Was expecting to be in minimum custody in February, now years added.”

Manning expressed her gratitude for the outpouring of public support, according to a statement by her ACLU attorney Chase Strangio.

“When I spoke to Chelsea earlier today she wanted to convey the message to supporters that she is so thankful for the thousands of people from around the world who let the government know that we are watching and scrutinizing what happens to her behind prison walls,” he said. “It was no doubt this support that kept her out of solitary confinement.”

This activism will be essential to continue fighting for justice for Manning, Strangio said.  “No one should have to face the lingering threat of solitary confinement for reading and writing about the conditions we encounter in the world. Chelsea’s voice is critical to our public discourse about government accountability and trans Justice and we can only preserve it if we stay vigilant in our advocacy on her behalf.”

Chelsea Manning faces possible indefinite solitary confinement for charges that include possessing a tube of expired toothpaste and the Caitlyn Jenner cover issue of Vanity Fair in her prison cell.

The Wikileaks whistleblower is scheduled to appear before a disciplinary board on August 18 at the military prison in Fort Leavenworth, Kansas. She faces charges of possessing multiple prohibited items, which were seized from her cell last month.   The items also include a copy of the US Senate Intelligence Committee’s report on torture, the LGBT publication Out Magazine, and the memoir I Am Malala by Nobel peace prize laureate Malala Yousafzai.

Manning says she also faces charges of misusing medicine for the expired toothpaste, disrespecting an officer for her request to speak to a lawyer, and disorderly conduct for sweeping crumbs onto the floor.

The maximum penalty she could receive is indefinite solitary confinement.

Manning’s case is a high profile example of the often innocuous reasons for which people are sent for discipline in solitary. According to information compiled by the American Civil Liberties Union, individuals have been put in solitary for such activities as cheering too loudly during the Super Bowl, failing to make the bed, having too many stamps, and praying in a group of three.

Over the weekend, Manning reported that she is being refused access to the law library at the prison as she prepares to go before the disciplinary board. “Prison staff are now denying me access to the law library @ scheduled times – w/only 2 days until my board,” she wrote in a tweet that was posted by supporters. Manning is not allowed to have a lawyer present with her at the hearing.

The disciplinary charges have alarmed human rights groups and a petition with over 100,000 signatures was to be delivered to the Army liaison in Congress ahead of the hearing.   Many supporters believe the charges are political in nature because of Manning’s activism.  “This kind of action has the potential to chill Chelsea’s speech and silence her altogether,” said ACLU attorney Chase Strangio, who works with Manning. “We are hopeful that the prison will respond by dismissing these charges and ensuring that she is not unfairly targeted based on her activism, her identity, or her pending lawsuit.”

Manning is a columnist for the Guardian newspaper and writes about a range of issues including global affairs and intelligence issues.

She also advocates for the rights of trans people, and announced publicly in 2013 that she was transitioning and identifies as a trans woman. Transgender individuals are disproportionately placed in solitary for both disciplinary and “protective” reasons.

Manning was convicted in 2013 for leaking more than 700,000 classified documents, videos and other materials through Wikileaks, which exposed extensive wrongdoing by the US government and its allies. She is currently serving a 35-year sentence.  Manning spent months in solitary confinement while awaiting her trial.

Her treatment in solitary was decried as torture and prompted outrage.  It helped thrust the issue of solitary confinement into the spotlight and provided the opportunity to highlight that the solitary conditions she endured are standard procedure in prisons across America.