Update, June 12, 4:30 pm: The 5th Circuit Court of Appeals has decided to continue the stay and block release until the State of Louisiana’s appeal is heard, but they have also granted an “expedited” status for the appeal. Final legal briefs are due August 7, so nearly two more months will pass before Albert Woodfox knows if and when he will be freed.

Update, June 9, 8:00 pm: A three-judge panel from the U.S. Fifth Circuit Court of Appeals has issued a stay that will keep Albert Woodfox in prison until 1 pm on Friday, “unless this order is vacated, or renewed indefinitely or to a time certain, by this panel.” Woodfox’s attorneys will appeal the stay.

The stay comes in response to an appeal mounted today by Louisiana Attorney General Buddy Caldwell, who wants to keep Woodfox behind bars and try him for a third time, rather than releasing him immediately, as ordered yesterday by a Federal District Court judge.

This afternoon, a federal judge in Louisiana issued an unconditional writ of habeas corpus, ordering the immediate release of the Angola 3’s Albert Woodfox and barring a retrial. He could be released within hours or days after more than 43 years in solitary confinement.

According to Tory Pegram, Campaign Coordinator for the International Coalition to Free the Angola 3, Judge James Brady of the Federal District Court in Baton Rouge “argues that this extraordinary remedy is merited due to the following 5 factors: Mr. Woodfox’s age and poor health, his limited ability to present a defense at a third trial in light of the unavailability of witnesses, this Court’s lack of confidence in the State to provide a fair third trial, the prejudice done onto Mr. Woodfox by spending over forty-years in solitary confinement, and finally the very fact that Mr. Woodfox has already been tried twice and would otherwise face his third trial for a crime that occurred over forty years ago.”

Woodfox has been held in solitary confinement since 1972 for the murder of corrections officer Brent Miller at the Louisiana State Penitentiary at Angola. Many believe that he and the other two members of the so-called Angola 3 were targeted for the crime, and subsequently held in isolation, not because of the evidence but because of their involvement in the prison’s chapter of the Black Panther Party.

In 2013 Judge Brady also vacated Woodfox’s conviction on the grounds that there had been racial bias in the selection of grand jury forepersons in Louisiana at the time of his indictment. Last November, the Fifth Circuit, considered one of the nation’s most conservative Federal Appeals Courts, voted to uphold Brady’s ruling.

The man most likely to abhor Judge Brady’s ruling today is Louisiana Attorney General James “Buddy” Caldwell. Caldwell has called Woodfox, now 68 years old, “the most dangerous man on the planet” due to his political convictions. More recently, when Woodfox’s conviction was overturned last year, Caldwell immediately vowed to appeal, saying: “We feel confident that we will again prevail at the Fifth Circuit Court of Appeals. However, if we do not, we are fully prepared and willing to retry this murderer again.”

Caldwell asserts that the evidence against Woodfox is “overpowering”: “There are no flaws in our evidence and this case is very strong,” he said last year. These statements belie the fact that much of the evidence that led to Wallace and Woodfox’s conviction has since been called into question. In particular, the primary eyewitness was shown to have been bribed by prison officials into making statements against the two men. Solitary Watch’s James Ridgeway first wrote about the Woodfox case in 2009 in Mother Jones, providing a comprehensive history and analysis, as well as an account of the conditions in which Woodfox has lived for four decades.

Woodfox’s conditions of confinement have if anything deteriorated in the last five years: He was moved from Angola to David Wade Correctional Center in north central Louisiana, where, according to a separate lawsuit, he faces multiple daily strip searches and visual body cavity searches. Woodfox, along with Robert King and the estate of Herman Wallace, is also plaintiff in amajor federal lawsuit challenging his decades in solitary on First, Eighth, and Fourteenth Amendment grounds. That suit may also finally come to trial this year. 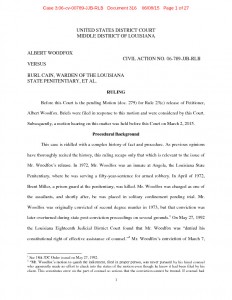 Here in San Quentin, I See Why Solitary Confinement Must End