With Loved Ones in Prison, Women Lead the Fight Against Solitary Confinement in New York 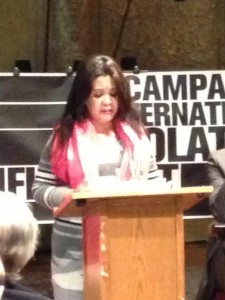 Jessica Casanova speaks in support of the HALT Solitary Confinement Act at a press conference in 2014.

Jessica Casanova’s nephew wrote her a letter: “I”m here in a steel coffin. I’m breathing but I’m dead.” Casanova recounted, “I didn’t know what that meant so I got on a bus and I found out.”

That was in 2012, and three years later, she’s still finding out. As it turned out, Casanova’s nephew, Juan, was in solitary confinement. He was spending 23 hours a day alone in a cell and deteriorating quickly.

His first trip to solitary was in 2001, for allegedly smoking a joint. Although Juan was only isolation for a matter of months, Casanova said, “He’s never been the same after that.” While his first stay was brief, at this point the 33-year-old has now spent a total of about 10 years in solitary. Casanova went on to explain that her nephew now suffers from extreme bouts of depression, paranoia, and mood swings. She added, “Sometimes in the letters it seems like he might be hallucinating.”

“Seeing someone in solitary confinement,” Casanova said, “is like you’re watching them die right in front of your eyes. … I have never in my life experienced another human being being reduced to nothingness.” She added, “I just don’t understand how this can happen in the world.”

Although her nephew’s experience opened Casanova’s eyes, the 43-years-old East Harlem resident is not the only one coming to such realizations. Nationwide, there are at least 80,000 people in solitary confinement on any given day – and most have families who watch them suffer.

Leah Gitter, a retired New York City schoolteacher, is another of those suffering relatives. Her godson, Robert, has spent time in solitary both in Attica and Green Haven, maximum security prisons in New York State.

Gitter said that, during the time Robert was in solitary confinement, “I saw him becoming more unstable and more isolated and sicker. It was like he was withdrawing.” She added, “You get into this mindset where you can’t function because of all that isolation and he wasn’t well to begin with.”

As is perhaps evident from Casanova’s and Gitter’s stories, despite the documented mental health impacts, individuals with existing mental health problems are routinely placed in solitary confinement, a practice which may be counterproductive to any perceived public safety goals. Gitter observed, “I don’t know who benefits from punishing people like that.”

Robin Goods can relate. Her son, George, has spent more than a decade in solitary confinement in California. She said, “I have been visiting with my son George E. Jacobs for the past 10 years behind a glass window. When I look into his eyes I can see the progression of the effects of torture. The first year George had a distance look in his eyes. After the second year in the SHU he had a vague look in his eyes. Now after ten years in the SHU, George has a hollow empty look in his eyes.  I am witnessing my son being slowly and deliberately tortured to the point of … devastating mental health deterioration.”

Initially, her son was isolated for a small infraction – Goods said she was told that he refused to take out his shoe laces before a visit. He was sentenced to two years in solitary, but prison officials gradually extended his stay longer and longer. She said, “When he goes for the review they say it’s small infractions like refusing to eat, sharing food.” Recently, George was let out of SHU, but instead of being moved to general population, he was just placed in another type of solitary confinement know as Administrative Segregation.

Goods said, “The deterioration is so profound that it almost affects me. You feel like you want to scream at the top of your lungs, because how can you help? What can you do?” Answering her own question, she continued, “I felt so depressed and helpless and anything I tried wasn’t going anywhere. Then I became angry and decided to stand back up and fight.”

That urge to fight is something Goods has in common with Casanova and Gitter. As a result of their family connections, all three women have become crusaders against solitary confinement.

Gitter said that, knowing about the conditions of her godson’s confinement, “I was so frustrated. This was the only way I could survive — to think that I could do something, to save his life.” She became active in Mental Health Alternatives to Solitary Confinement (MHASC) and “fought like hell” to get the SHU Exclusion Law passed in 2008.  The law is meant to bar most people with serious mental illness from being placed in isolation in New York’s state prisons. Gitter said, “We had press conferences and lobby days. We were relentless, even though it took eight years – a human rights bill [took] eight years to get passed.”

Jennifer Parish, the director of criminal justice advocacy at the Urban Justice Center’s Mental Health Project, said, “Leah in some way is the godmother of the movement. She’s been a force for speaking to policy makers at all different levels … She had really done so much to gather people around addressing the problem of people with mental illness in our prison system and in solitary confinement.”

While Gitter has been involved in solitary confinement activism for over a decade, Casanova got into it more recently. In 2013, she joined the New York Campaign for Alternatives to Isolated Confinement (CAIC) and in 2014 spoke at the first press conference announcing the Humane Alternatives to Long-Term (HALT) Solitary Confinement Act. The HALT Act, which is gradually gaining momentum in both the Senate and the House, would ban solitary confinement in New York’s prisons and jails to 15 days, the limit suggested by the UN’s Special Rapporteur on Torture. Individuals requiring more secure housing over the long term would be placed in new Residential Rehabilitation Units with increased therapy and programming.

Parish said of Casanova, “She’s a tremendous advocate. When she talks about what her nephew has gone through it’s just incredibly powerful.”

Though Goods lives in New Jersey, she’s also been active in CAIC, a New York-based group. Parish said, “Robin has a leadership role within CAIC she’s one of the co-chairs of the legislative committee. She’s been part of taking trips to communities upstate to help form branches of CAIC. She’s done presentations upstate. Her son is in California so the fact that she’s working so strongly here is amazing.”

Goods said that, if there’s one thing she’s learned through her activism, it’s that if you’re a family member of someone in solitary, “You are the extended voice on the outside and you should use it as loudly as you can. There’s nothing worse going to happen than what’s already happened.”

Although Casanova, Gitter, and Goods are all important figures in the movement against solitary, they aren’t the only ones – there are wives, girlfriends, parents, siblings, and children scattered throughout activist groups.

“I think,” Parish said, “one of the most important roles that family members play in the movement is reminding everyone who’s involved about the urgency of changing these policies. Because every day their family members are facing solitary or have the potential to face it, and it reminds us that this is not an abstract problem. I think that for people are in the movement it can sometimes be far away. Prisons are closed institutions. But the families constantly keep the fire burning in all of us to make the changes.”