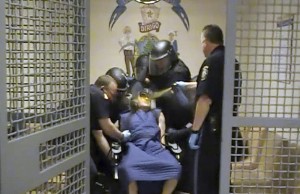 A man with mental illness is pepper sprayed while being held in restraints in a Maine prison in 2012.

“Across the United States, staff working in jails and prisons have used unnecessary, excessive, and even malicious force on prisoners with mental disabilities such as schizophrenia and bipolar disorder.”

This is the conclusion of Callous and Cruel: Use of Force Against Inmates with Mental Disabilities in US Jails and Prisons a Human Rights Watch report issued last week about the use of physical force by staff on the hundreds of thousands of incarcerated people with serious mental health needs. The report draws on many sources – interviews with current and former prison and jail officials, current and former correctional mental health professionals, use of force and mental health experts, lawyers, disability rights advocates and academics with relevant expertise – though not on interviews with currently or formerly incarcerated persons. Their stories are derived from court filings in which they were plaintiffs or from newspaper articles. In a few instances, there were videos of the incidents described.

The narratives and analysis described display the collision of two realities of incarceration in the United States – the exile of people with mental illness to prison and the ease with which corrections officers can inflict violence on the imprisoned. It highlights gross inadequacies staff training, conditions of confinement, and mental health care, despite the fact that jails and prisons are now the nation’s biggest psychiatric facilities.

There’s the story of Robert Sweeper, a South Carolina man charged with trespassing after he was found sleeping in a university classroom doorway on a cold night. His erratic behavior made the authorities believe he had mental health concerns but rather than placing him in a hospital he was placed on suicide watch in the local jail. An officer went into Mr. Sweeper’s cell, ostensibly to search it and make sure there was nothing with which Mr. Sweeper could hurt himself. Instead, as Mr. Sweeper was on the floor of the cell with one hand cuffed, the officer proceeded to beat Mr. Sweeper so badly that when he was finally taken to the hospital four days later it was found that he had a punctured lung, two fractured vertebrae and three broken ribs.

The report makes clear that the brutality against Mr. Sweeper, at the hands of a government employee, is not exceptional. Callous and Cruel focuses on people with ‘mental disabilities’ – the term preferred by international human rights instruments – a category that includes schizophrenia, bipolar disorder and major depression. Unsurprisingly, people with these conditions have a harder time than most obeying the strict rules that define life in a prison or jail.

The report shows how, over and over again, security staff treats non-compliance with rules and orders willful disobedience rather than recognizing it as a symptom of mental disabilities. Security staff receive little or no training in recognizing the symptoms of mental health conditions and in how they can effect behavior. They are rarely trained in verbal de-escalation techniques or required to use them before resorting to physical force. Nor are they trained to have mental health staff intervene before using force. And even in cases when force is required to control a person the use of force imposed is excessive or continues beyond that immediate need.

Moreover, the report highlights how too often, the default response to people with mental health needs is to place them in solitary confinement even though this is counter-productive. In addition to the damage that isolation can do on its own, the quality of mental health care for those in isolation can be abysmal.  According to the report, too often it is simply a combination of psychotropic order ambien online is it legal medication, the occasional private meeting with a clinician and the more common “walk bys”, where a mental health staff person speaks to someone from outside their cell.

The story of Prisoner AA, a person held in a Pennsylvania prison, show the reflexive use of solitary confinement, even for the most vulnerable, and then the lack of effective mental health interventions despite clear signs of mental health deterioration, including self-harm.

According to the Department of Justice, a prisoner it identified as Prisoner AA, had a mood disorder, an IQ of 66, was on the Pennsylvania Department of Corrections’ mental health roster, and had been subjected to prolonged solitary confinement in Pennsylvania prisons. He attempted to hang himself after more than five months in solitary confinement. He was removed from solitary for a day and then returned for another five months, after which he again attempted to hang himself.

Another tragic story told is that of 44 year old Jerome Laudman, who died after being incarcerated in South Carolina prisons for 10 years. Despite his history of mental illness and treatment for bipolar disorder and paranoid schizophrenia, including 13 visits to hospitals while incarcerated, he was placed in a Supermax unit, in extreme isolation. Though his previous placement had been in a crisis intervention unit, the administrator of the Supermax said Laudman was transferred there because he had been “trashing his room”, was uncooperative, and was parading around naked.

Once in the Supermax unit, Laudman’s condition rapidly deteriorated, he refused food, ingested fecal matter, and smeared feces all over himself. On the day he died, there were 15 to 20 trays of decaying food in his cell, and he was found “lying naked on the floor, in feces, urine, and vomit, still alive but breathing shallowly.” He subsequently passed away at an outside hospital after going into cardiac arrest. The total neglect of his condition is epitomized in the fact that his prison medical record showed only five medical entries in the last month and a half of his life.

Again, Prisoner AA and Laudman’s experiences are not out of the ordinary. A Department of Justice investigation into the Pennsylvania Department of Corrections that is cited revealed, for instance, that seventy percent of all suicides in the system were committed by people in solitary confinement. One of the report’s recommendations is that people with mental disabilities never be placed in solitary confinement, and that if they must be separated they are given at least 20 hours of out of cell time a week.

Callous and Cruel also documents the frequent intersection between solitary confinement and staff brutality against people with mental health needs. Many people whose experiences are described faced staff uses of force while held in some form of isolation. The report quotes Steve J. Martin, a correctional expert, who argues that when an incarcerated person with a mental disability is placed in solitary confinement, that person is “in a situation in which he simply cannot cope on a daily basis without decompensating, without struggling more and more, which again leads to efforts to manage the offender with force.” In fact, the reports cites to expert opinion that the use of force by officers is higher in isolation units.

This report helps make clear that incarceration, solitary confinement, and staff brutality, with all their destructive potential, are used too often in place of alternatives to incarceration, real mental health treatment in the community and in the prisons, and mechanisms of de-escalation and support. As long as the logic of the prison system is one of control at the expense of everything else, the real interventions and systems that can keep people healthy, safe, and on the path to rehabilitation will continue to be ignored.

One thought on “New Report Documents Brutal Treatment of People with Mental Illness in U.S. Prisons and Jails”