Voices from Solitary: The Life of an Escape Artist

The following comes from Steven Jay Russell, who is currently serving a 144-year sentence at the all-solitary Allan B. Polunsky Unit in Texas. Notorious for masterminding four successful, non-violent escapes from Texas correctional facilities, his story is recounted in the movie I Love You Phillip Morris. Russell, who has been held in administrative segregation for nearly two decades, is the first person in U.S. history to receive a life sentence for prison escapes. He can be reached by writing: Steven Russell, 00760259, Allan B. Polunsky Unit, 3872 FM 350 South, Livingston, TX 77351. –Lisa Dawson 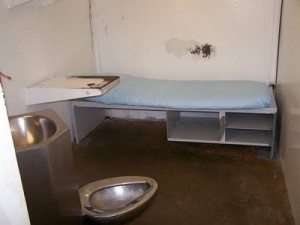 A cell in the Polunsky Unit.

My name is Steven Jay Russell, age 57, and incarcerated in the death row building at the Polunsky Unit (Texas Department of Criminal Justice- Correctional Institutions Division) in Livingston, Texas, for the non-violent, non-aggravated, offenses of theft by embezzlement and escape. Despite being a non-violent offender, I was sentenced to a 144 year (consecutive or stacked) term of imprisonment. On May 23, 2014, I began my 19th year of solitary confinement. I’ve never been charged with or convicted of any type of criminal offense or institutional disciplinary case for weapons possession, any type of assaultive behavior, destruction of property, or the taking of a hostage. It has been more than eight (8) years since I received any type of major institutional disciplinary case.

Solitary confinement, or administrative segregation, is the most restrictive form of incarceration in the Texas prison system. I am housed in the same building and same pod as inmates who have been sentenced to death for the offense of capital murder. With the exception of cell rotations that are implemented on a periodic basis, my level of security and conditions of confinement, are identical to those inmates that are sentenced to death. We both live in a single man, 6×10 square foot concrete box with a bunk, toilet, sink, table, and metal door with two narrow windows that are covered with wire mesh or plexiglass. My personal property must fit in a two (2) cubic foot container. Human contact, or touching another individual, is against the prison rules.

I do receive a small amount of natural light that comes into the cell via a narrow window about two inches from the ceiling of my cell that remains sealed shut. I do not have access to a television or telephone. Any contact with visitors must occur behind thick plexiglass and a handset type of intercom system.

Except during lockdown, (i.e. Comprehensive cell searches that must take place at least four (4) times per year [a total of six weeks]), I am entitled to what’s called, “recreation,” five days per week for two (2) hours per day in a cage in front of my cell, or a cage with four concrete walls and bars as the ceiling outside. I am also entitled to a daily shower. Guards working my pod pick the time of day or night for both of these privileges. Anytime I leave my cell, or before returning to my cell, I must submit to a full body strip search that is seen by God, man, women, and the cameras that are located throughout this prison unit. Shackles and hand restraints are required for the escort to or from the rec yard, visiting room, and shower. Two guards must escort me to and from wherever it is I am going. If nudity is an issue, this is not the prison for you!

Altogether, there are approximately 420 men assigned to the death row building at Polunsky. Seventeen (17) of these men, including myself, have been singled out for retributive cell rotations. A cell rotation occurs every three to fourteen days and involves exchanging cells with another generic clonazepam brands inmate. An inmate is moved out of his cell, and another inmate is immediately moved in. Cleaning the cell of another inmate, especially one who has serious mental illness and never takes a shower, creates real chaos and unsanitary living conditions. The only cleaning materials that I am issued is a small container of Ajax type cleanser. Cleaning rags, scrub brushes, gloves, toilet bowl brushes, or disinfectant, are all considered contraband and not issued. We are also moved all over the building so that others can see the penalty for escape. Prison staff tell me that the reason for cell rotations is to prevent escapes. Well, if the cells are not secure enough to house a non-violent offender like myself, who has never broken out of prison, why is it secure enough to house the killers who are sentenced to death?

I’ve been doing the cell rotation blast since April of 1998. What changed? I can’t explain it, except for the retributive aspect. Prison officials hold grudges. The jury that gave me my 99 year sentence for my final escape was made-up with seven (7) individuals who were employed by the prison system in Huntsville (Walker County), Texas. At the time of my escape, George W. Bush was governor of Texas. I guess he was embarrassed because I walked out the front door dressed as a doctor on the Estelle Unit, a maximum security prison.

A book by Steve McVicker, three television documentaries on ID Discovery, and film entitled, I Love You Phillip Morris, (Jim Carrey portrays my role in the movie) cover my life. I am, and have been diagnosed with, and take medication for, Obsessive Personality Disorder. I escaped to be with my lover/partner, Phillip Morris. Trial officials, parole officials, prison officials, and my counsel, all realized that I was obsessed over my relationship with Phillip Morris. To save my life, I can’t understand why that fact was never considered to be a mitigating issue on punishment.

I walked out of the prison and jail. I did not steal a car or hurt anyone. Without medication, the OCD becomes out of control for me.

I am reviewed for parole release on an annual basis and have been denied twelves (12) times. Every six months, I am given sham reviews by prison staff to be released to general population. These reviews take about 1 1/2 minutes and are always denied. I’m told that I will never be released to general population by a number of wardens, who have retired.

People who lived in this building and other units I’ve been assigned to in Administrative Segregation or solitary, give up, and some have committed suicide.

At this time, I can name about 13-14 men who quit and gave up on life. I’ve watched men cut their bodies, chop off their testicles, try and hang themselves from the light fixture, smear feces and urine all over themselves and their cell, throw feces at staff, at other inmates, scream and screech throughout the day and night, talk to themselves, stand at their cell door or on the outside rec yard or inside rec cage and take all of their clothes off and expose themselves to others, or overdoes on medications. I feel as if I’m living in a zoo and the situation at best, is overwhelming.

How will this all affect me psychologically once I’m released onto parole? At present, I no longer enjoy being around or interacting with others. Touching another individual, even via a shake of the hand or hug has not happened in so long that I’m not even sure how I will react if this ever takes place. Of course, with my sentence, the parole board could keep me incarcerated for the rest of my life. No, it will not surprise me.

14 thoughts on “Voices from Solitary: The Life of an Escape Artist”