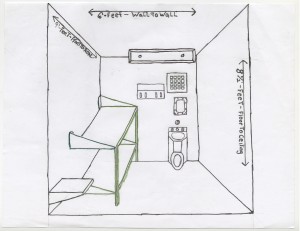 In 1987, when he was 23 years old and in court on a drug charge, William Blake shot two sheriff’s deputies in a failed escape attempt, killing one. At his trial, the judge presiding over his case expressed regret that New York did not have capital punishment, so he could not sentence Blake to death.

Instead, for the past 27 years, Blake has lived in extreme isolation in a 7 x 9 cell. He is fed through a slot in the solid steel door, and on some days he’s allowed out for an hour to “exercise” alone in a small, barren pen. Because his sentence is 77 years to life, he is virtually certain to die in prison. Because he is classified as both a cop killer and an escape risk, he may well spend the rest of his life in solitary confinement.

Recently Blake, now 50, described his years in the “Special Housing Units,” or SHUs, of New York’s state prisons. “If I try to imagine what kind of death, even a slow one, would be worse than twenty-five years in the box—and I have tried to imagine it—I can come up with nothing,” he wrote. “Dying couldn’t take but a short time if you or the State were to kill me; in SHU I have died a thousand internal deaths.”

Opponents of the death penalty have had many occasions to celebrate in the new millennium. Four states have abolished the practice in the past five years, while others have legally or effectively set moratoriums on executions. Support for capital punishment in the United States is at its lowest point in four decades, and seems likely to fall further as the number of exonerations and gruesomely botched executions continues to grow.

But at what cost have these concessions been won? The NAACP Legal Defense and Educational Fund’s latest “Death Row U.S.A.” report found 3,049 individuals awaiting execution in the United States. According to theSentencing Project, at last count nearly 50,000 people were serving sentences of life without the possibility of parole—a number that has more than tripled since the early 1990s. Over 159,000 were serving life sentences—many of them, like William Blake, with minimums so long that they might as well be doing life without parole, too.

In many states, the expansion—and the very existence—of life without parole sentences can be directly linked to the struggle to end capital punishment. Death penalty opponents often accept—and even zealously promote–life without parole as a preferable option, in the process becoming champions of a punishment that is nearly unknown in the rest of the developing world.

In California, for example, where the latest attempt to end capital punishment by referendum was narrowly defeated in 2012, voters were urged not simply to abolish the death penalty, but to “replace” it with life without parole. In support of this cause, the ACLU of Northern Californiamade a virtue of the similarity between the two punishments: “The reality is that people sentenced to life without parole have been condemned to die in prison and that’s what happens: They die in prison of natural causes, just like the majority of people sentenced to death.” Referring repeatedly to life without parole as “death in prison,” the ACLU resorts to language far more draconian than one might expect from any liberal organization: life without parole sentences have the advantage of being “certain” and “swift,” because “[u]nlike death penalty cases [they] receive no special consideration on appeal” Such sentences are also “severe,” since spending a lifetime in “California’s overcrowded, dangerous prisons…growing sick and old, and dying there, is a horrible experience. This is especially true given the unconstitutional failure to provide adequate health care to California’s prisoners.”

Kenneth E. Hartman, who is serving life without parole in California, agrees with such an assessment—and for that reason, strongly opposed the referendum to replace capital punishment with life without parole. Hartman runs, from prison, a campaign called the Other Death Penalty Project, on the premise that a sentence of life without parole amounts to “a long, slow, dissipating death sentence without any of the legal or administrative safeguards rightly awarded to those condemned to the traditional forms of execution.”

“Though I will never be strapped down onto a gurney with life-stopping drugs pumped into my veins,” Hartmann has written, “be assured I have already begun the slow drip of my execution [which] won’t come to full effect for 50, maybe 60 years.” Like William Blake in New York, he states: “I have often wondered if that 15 or 20 minutes of terror found to be cruel and unusual wouldn’t be a better option.”

Complicating matters is the fact that life without parole rarely takes its place as simply a one-for-one alternative to the death penalty. In New York State, for example, life without parole did not exist before the state’s brief reinstitution of capital punishment from 1995 to 2004. During this period, there were never more than half a dozen men on New York’s death row, and no executions took place. Yet today, nearly 250 people are doing life without parole in New York, and more than 1 in 6 of the state’s prisoners is serving a life sentence.

Connecticut, in abolishing its death penalty in 2012, legislated a punishmenteven more harsh than simple life without parole. Thereafter, a new law decreed, those convicted of “murder with special circumstances” would be condemned to live out their life without parole sentences in solitary confinement. The measure was reportedly backed as a way to win enough support for the repeal bill.

Though the requirement that life/LWOP sentences be served in solitary confinement is codified into law only in Connecticut, it exists in practice throughout the nation. An unknown number of lifers have, like William Blake, been placed in permanent or indefinite solitary confinement by prison officials, without benefit of any kind of due process. So have most of the individuals on the nation’s death rows, including the supposedly fortunate ones who live in states that have instituted moratoriums, and are therefore unlikely to ever face execution.

3 thoughts on “Fates Worse Than Death?”