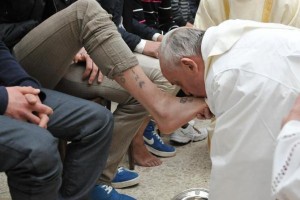 Pope Francis washes the feet of youth in a juvenile detention center in Rome during Holy Week, 2013.

In a wide-ranging speech on Thursday, Pope Francis revealed himself as a passionate criminal justice reformer. His words also suggest that he is familiar with the controversies surrounding solitary confinement and supermax prisons, and strongly opposes their use.

Speaking at the Vatican to representatives of the International Association of Penal Law, the Pope said: “All Christians and people of good will are called today to fight not only for the abolition of the death penalty, be it legal or illegal, in all of its forms, but also for the improvement of prison conditions in respect for the human dignity of those who have been deprived of liberty.”

Previous popes, including John Paul II, have been outspoken opponents of capital punishment. But Francis took his discourse a step further, denouncing sentences of life in prison, and saying that “a life sentence is a hidden death sentence.”

The Pope called for a ban on all criminal detention of children, for “special treatment” for elderly people in prison, and for an end to preventive detention, which he called a “hidden, illegal punishment.” More broadly, he denounced “the deplorable conditions of detention that take place in different parts of the world,”  which he called an “arbitrary and merciless exercise of power over persons who have been deprived of freedom.”

Francis specifically turned his attention to supermax prisons. His term was carceri di massima sicurezza, which more literally translates to “maximum-security prisons”–but from his emphasis on extreme isolation and its consequences, it is clear that the Pope was referring to the use of solitary confinement. Pope Francis’s statement in full on the subject is as follows (with apologies for a rough translation):

One form of torture is sometimes applied by imprisonment in maximum security prisons. With the motive of providing greater security to the community or special treatment for certain categories of prisoners, its main buy valium from usa feature is none other than isolation. As demonstrated by studies carried out by different human rights bodies, the lack of sensory stimuli , the complete lack of communication and the lack of contact with other human beings, causes physical and emotional suffering such as paranoia, anxiety, depression, and weight loss, and significantly increases the chances of suicide.

This phenomenon is characteristic of high security prisons, but it also occurs in other kinds of prisons, along with other forms of physical and mental torture…These tortures are now administered not only as a means to achieve a particular purpose, such as confession or denunciation, in the name of national security. They are a genuine surplus of pain that is added to the suffering of imprisonment. In this way, torture takes place not only in clandestine detention centers or in modern concentration camps, but also in prisons, juvenile institutions, psychiatric hospitals, police stations, and other institutions of detention and punishment.

The Pope also warned against seeing prison as a cure for all of society’s ills. “In recent decades there has been a growing conviction that through public punishment it is possible to solve different and disparate social problems, as if for different diseases one could prescribe the same medicine,” he said. In conclusion, he advised that “caution in the application of punishment should be the governing principle of all criminal justice systems,” and that States should not, for any purpose, subvert “respect for the dignity of the human person.”

Pope Francis previously made headlines during his first Holy Week by washing the feet of twelve youth held at a juvenile detention center in Rome while celebrating the mass of the Last Supper, when Jesus washed the feet of his disciples.

In a papal mass just a few days before his speech on criminal justice, Francis told an assembly of Catholic bishops: “God is not afraid of new things. That is why he is continuously surprising us, opening our hearts and guiding us in unexpected ways.”