Voices from Solitary: A Day in the Life, Part VI

This post is the next in a series of pieces Solitary Watch is publishing as part of a project calling for people held in solitary confinement to write on various proposed themes. Our first suggested theme, “A Day in the Life,” calls for writers to describe a day in his or her life in solitary confinement (read previous entries here).

The following piece, entitled “The ‘Hole’ Truth,” comes from Nathan Brewer, 29, who has spent six of the last eight years incarcerated in the Indiana prison system, during which time he was sentenced to solitary confinement multiple times for nonviolent offenses. In his piece, Brewer, who has been diagnosed with both anxiety and dysthymic disorders, describes the way in which he was treated while held in administrative segregation at Hamilton County Jail in Noblesville, Indiana.

He writes, “The conditions and treatment to which I was subjected were gravely oppressive and unethical on every front.” Released from Westville Correctional Facility in March of this year, Brewer continues to suffer from severe anxiety, which he states was only exacerbated by his time in isolation. He writes from his sober living home, Celebrate Freedom, in Indianapolis. He can be reached by writing: Nathan Brewer, P.O. Box 88033, Indianapolis, IN 46208.  –Lisa Dawson 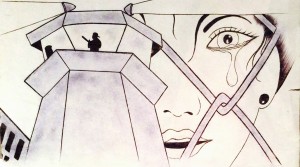 Art from Solitary: “The ‘Hole’ Truth” —by Nathan Brewer

I have spent six out of my last eight years incarcerated. Two of these years were served at Hamilton County Jail (HCJ). Throughout this period, I was sentenced to solitary confinement, a.k.a. “the hole,” a total of three times. Two of these sentences were for nonviolent, petty offenses, which included note passing and allegedly possessing tobacco. One of these stints, however, landed me in protective custody (PC) for 15 days (which coincided with both Christmas and New Year’s), the cause of which was another detainee using my telephone voice password to prank the Prison Rape Elimination Act (PREA) hotline. Although I was sentenced to the hole for a prank which I had nothing to do with, jail staff refused my requests to listen to a recording of the alleged phone call that I made, ultimately preventing me from defending myself.

In this essay, I write to inform readers about what it is like to be in indefinite solitary confinement, which in this particular case was involuntary protective custody (PC, which in my instance could also stand for “Punitive Confinement,” considering I was punished for being the victim of a prank).

Each morning, I was rattled from my sleep by a jarring, intrusive squawk over the intercom box in my cell. This untimely disruption, which naturally came at a time when I was in my deepest stage of sleep, was the voice of a corrections officer (CO) announcing my hour out: “BREWER! DO YOU WANT YOUR HOUR OUT?!” This rude awakening required a prompt “yes” response, as no response qualifies as “no” by default, and this opportunity for a short time out of my solitary hovel would be missed until the next rude awakening 24 hours later.

Despite being roused from my sleep, I never once turned down my time out, regardless of how tired I was, withstanding the fact sleep is the only escape in jail and is invaluable. I recall being so psyched to get out of my cell that first day in PC, but soon discovered that I would not be getting a full hour out during my “hour out.” No, the staff at HCJ had devised a way to shortchange those held in solitary of this basic right. Each day, I was permitted 30 minutes out in the day room, during which I was expected to shower, clean my cell, order commissary, make one phone call and, when possible, interact with anyone else also on their hour out (oftentimes nobody).

After just 30 minutes, guards would order us to return to our cells: “LOCDKDOOOOWN! LOCKDOWN!” This was unless of course you opted to go to the “recreation room,” which was a small, freezing cold, trapezoidal-shaped room, with nothing in it but a chessboard with no pieces.  The room reeked of the distinct smell of a grain bin (to this day, I haven’t figured this out) and the floor was grossly covered in toenail clippings.

With that said, it was no small wonder that most chose to decline this optional 30-minute time offered for “recreation.” On most every occasion, I chose to return to my cell, which only underscores how successful the guards were in their strategically designed plan to restrict people’s full hour out to just half that time, and we played right into their hands. This is precisely what the staff wanted, and the sham “rec time” offered is how they managed to give us just 30 minutes out of our cells, as opposed to the required 60 minutes – and they were justified in doing so, since they did indeed offer “rec time.”

While held in PC, I was not permitted to attend any of the programs which I had been frequenting for nearly the past two years, including Alcoholics Anonymous (AA) and Overcomers, a group which provides Christ-centered substance abuse counseling. I have picked my brain for legitimate reasons why jail staff would not permit me to attend these programs, which serve no other purpose than to rehabilitate me. I was also denied access to the facility’s law library, an insurmountable hindrance to someone defending himself pro se, preventing me from effectively corresponding with the courts in accordance with their formal trial rules and procedures, indelibly having a negative impact on my case.

But what fired my indignation most of all was staff’s refusal to allow me to attend my weekly worship services, which they knew full well was my custom. And because my time in PC happened to coincide with Christmas and New Year’s, I missed the holiday worship service, which I had been anticipating all year. In fact, my absence at these worship services did not go unnoticed, as clergymen and volunteers who facilitated these programs visited me multiple times while in solitary. It was clearly not these people who had lobbied against my attending their programs. It was unquestionably jail officials who had denied me these basic privileges and rights.

With one blanket, a mat, no pillow and an incessant draft, I was always cold in my cell. Meal trays, served three times daily, provided no relief, as the upper tier was always served last, meaning my one hot meal was cold by the time it reached me in a Styrofoam tray, which had the capacity to hold only the scantest of portions. The other two meals were served cold to begin with. Also aggravating was the florescent security light, which was on 24/7. Even closing my eyes allowed no relief, as its electronic hum was a inescapable reminder of the artificial environment and oppressive conditions to which I was subjected during each of my stays in solitary confinement.

When I was unable to distract myself, however, I spent my time in my cell in a constant state of anxiety and depression, with overwhelming feelings of hopelessness and despair. Many times, I would lie prostrate on the frozen floor of my cell, praying fervently, pleading with God, imploring him, to free me from my agony. I demanded vindication! No one deserves the treacherous plight to which I had been assigned. Never had I witnessed such callousness and ignorance (feigned or real, I’ll never know) as that which I saw in the guards and jail staff as a whole. My frustration mounted to the point where all I could do is just sob and continue to pray. I was being tested to my limits.

As a diversion from my cold surroundings, I would write letters, draw (with an anti-shank, short flimsy pen, as pencils were contraband), read my Bible (the only book permitted), meditate, or, if I was lucky enough, go back to sleep. Somehow I was able preserve enough peace in my heart and soundness in my mind to endure the darkest and most daunting chapter of my incarceration.

My time in isolation was nothing more than a roadblock to my rehabilitation that served only to magnify my depression and anxiety disorders, which directly resulted in my Post Traumatic Stress Disorder (PTSD), which I was diagnosed with following my release. These lingering psychological effects are primarily attributable to my stints in the hole, including the time I spent in involuntary PC for something over which I had no control; this in turn discouraged my faith in the system, my faith in humanity, and ultimately my faith in God, which is imperative for me – someone genuinely trying to come out rehabilitated and able to live a pro-social life.

Following my incarceration at HCJ, I was sentenced to the Indiana Department of Corrections (IDOC) and transferred to Westville Correctional Facility, where I was placed in the facility’s Therapeutic Community (TC), a program which unfortunately accepts only a limited number of people. Here, in a social environment conducive to rehabilitation, as opposed to punitive isolation, I thrived. In TC, I reached the “Top of the House,” a position in which I served as Dorm Elder, or overseer of all program departments. I also held the position as Orientation Facilitator, the most respected and challenging position in all of TC, which involved instructing new peers entering TC on the fundamentals of the program.

Based on these two very different experiences (HCJ PC and Westville TC), it is clear that the oppressive and overused practice of solitary confinement in all of its forms is not only unethical, but also counterproductive and downright destructive to any person’s hope for a successful recovery from a criminal lifestyle, substance use disorder, or any efforts at positive, lasting behavioral change. And nowhere in the equation to rehabilitate offenders and to reduce recidivism do I see a place for the practice of solitary confinement.

7 thoughts on “Voices from Solitary: A Day in the Life, Part VI”