What Solitary Confinement Does to the Human Brain 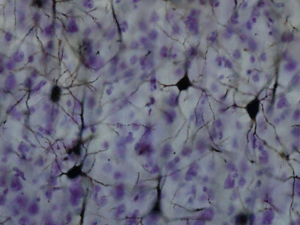 Prolonged isolation may damage the cerebral cortex, which is “the part of the brain that makes us most human.”

Based on the evidence amassed by researchers in the last several decades, we have reached a point in time when we may unequivocally state that solitary confinement inflicts psychological damage and distress on those subjected to it. Even in individuals with no prior history of mental illness or instability, extended periods of isolated confinement have produced severe psychological symptoms, and left deep and often permanent psychological scars.

More recently, such findings have been bolstered by the field of neuroscience, which is progressively discovering evidence that long-term isolation has the potential to actually alter the chemistry and structure of the brain.

Among the early researchers investigating the link between solitary confinement and mental abnormalities is Stuart Grassian, who became interested in the subject after visiting Walpole State Penitentiary in 1982 and interviewing several men in solitary confinement. Grassian realized “these people were very sick.” Those he spoke with exhibited symptoms such as hallucinatory tendencies, paranoia, and delirium—a collection of conditions he designated “SHU Syndrome.” Several other studies have since supported the existence of such a syndrome. The American Friends Service Committee, among others, also cites hypersensitivity to noise and touch, insomnia, PTSD, and uncontrollable feelings of rage or fear.

The rise of supermaxes and solitary confinement units across the country in the 1990s and early 2000s has intensified the problems associated with prison isolation.

According to an American Journal of Public Health study, 53.3 percent of self-harm incidents took place among those in solitary, who make up only about 5 percent of the prison population. Likewise, about half of all prison suicides take place in solitary confinement.  When their sentences are complete, individuals housed in solitary are often released directly to the streets—a practice that has been linked to increased recidivism rates.

Only recently, however, have researchers begun discussing the neurobiological effects of prolonged isolation. This research was showcased earlier this year at the annual meeting of the American Association for the Advancement of Science (AAAS), at a panel discussion during which neurologists and activists alike shared their experiences with solitary confinement’s destructive capabilities.

Panel member Craig Haney, a psychology professor from the University of California Santa Cruz, has spent the past thirty years both evaluating solitary confinement units across the country and documenting the effects of long-term isolation. One notable effect of such seclusion on prisoners, Haney states, is identity disorders that result from the lack of social interaction:

So much of who we are depends on our contact with other people, the social context in which we function, and when you remove people from that context, they begin to lose their very sense of self.

Huda Akil, a neuroscientist at the University of Michigan and also a member of the panel, concedes the fact that there are limitations when attempting to work with prisoners directly, but is confident in a connection between solitary and mental abnormalities because of existing evidence tying the absence of stimulus with changes in the brain:

Given the opportunity to document changes in segregated prisoners’ brains, Akil is certain the findings would support the theory that solitary confinement can fundamentally alter the structure of the brain.

When one considers the wealth of knowledge that behavioral science has contributed to establishing a connection between isolation and brain degeneration, along with the relatively new, concrete evidence offered by neuroscientists, the existence of a causal relationship is convincing.

In an article published by AEON Magazine  Shruti Ravindran presents a collection of first-hand accounts and recent scientific research supporting the panel’s central claim: “solitary confinement fundamentally alters the brain.” Among her resources are formerly incarcerated persons and renowned neuroloscientists, who have devoted themselves to documenting the negative effects that prolonged isolation can have on a person’s psyche.

Ravindran begins by introducing us to Robert King, a former prisoner and member of the AAAS panel, who spent 29 years in solitary at Louisiana’s Angola State Prison. King describes his experiences in and out of solitary confinement, and the lasting side effects. Even after his release thirteen years ago, he says, he often feels introverted, struggles with paranoia, and suffers from bouts of depression.

In an ongoing effort to prove the existence of a causal link between solitary confinement and its devastating mental consequences, neurologists like Elizabeth Gould, Mark Rosenzweig, and Marian Diamond have conducted experiments that demonstrate structural changes in the brain itself. Gould, a Princeton neuroscientist, and Alexis Stranahan, a postdoctoral researcher, together investigated the underlying reasons behind the isolated brain’s decline and found hormones to be somewhat responsible. They found that isolated rats could not effectively regulate stress hormones, leading to a dangerous buildup that was causing neurons to die. Normally, an animal would be able to maintain a hormone balance that preserves, and even grows neurons. But in a stress-inducing environment, such as the one isolation imposes, the ability to regulate hormones is lost and the body’s systems deteriorate.

Rosenzweig found that rats subjected to supermax-like conditions “had fewer connections between neurons and thinner cerebral cortexes” than those that were raised in stimulating, engaging environments. Diamond revealed the fragility of the cortex by demonstrating that environmental changes, positive or negative, had the potential to alter both the size and cellular makeup of the cortex at any point in a person’s life.  “The cerebral cortex,” Ravindran contests, “… is the part of the brain that makes us most human.” If the cortex is in fact one of the most crucial areas of the brain, it is alarming to find that it is so susceptible to environmental changes, especially the drastic sensory deprivation associated with solitary confinement.

As evidence of solitary’s biological affects accumulates, a valid question arises: What does this all mean for the future of solitary confinement? At a minimum it will strengthen every argument against the practice on both ethical and practical grounds. Prisoners are suffering not only mental anguish but also permanent physiological harm that will hinder their efforts to reintegrate into society.

9 thoughts on “What Solitary Confinement Does to the Human Brain”