Voices from Solitary: Reach Out

The following two poems come from Ricky Silva, who is currently serving a life sentence at Florida State Prison. Silva, 34, has been held in close management, or solitary confinement, for over four years. Regarding the first poem below, entitled “Killed by the Dark,” Silva expresses his sadness and anger at the suicide of another prisoner, also held in isolation. He writes:

The poem to go along with this post is dedicated to Johnny Reed who was murdered by the department of corrections.

. . . Johnny was not perfect, but I liked him and neither he nor anyone else deserves to go through what we are going through with this long term solitary confinement.

The poem pretty much says how I feel. I just found this out yesterday so I don’t even know what to write. But it is a reality check for me. We are all mortal and I have been real close to ending my own life many times. But Johnny will not be forgotten, at least not by me.

In his second poem, Silva makes a plea for people on the outside to write to someone held in isolation. Of his poem, he writes:

Imagine being so alone you feel you are surrounded by darkness. Having so much to say and no one to say it to. So much love to give yet no one to receive that love.

You want for a normal conversation the way a thirsty man wants for water in the desert.

A letter would be wonderful but it seems all the people in your life who cared have drifted away like a leaf in an autumn breeze. You recognize the wrong you have done and often blame yourself for how bad things are though you know deep down no one deserves this treatment. Not even you.

You contemplate suicide but somehow find the strength everyday for just one more day. You hang on by a thread of hope because tomorrow might be different.

I can tell you when I feel like this, a letter alone make all the difference. So if you’re reading this blog, take time to write a letter. How can it hurt? Even if you don’t write to me. Choose anyone who is living in a concrete cage like mine. Write to them if for no other reason than to give them someone to talk to.

Open your heart and through you, you could bring the hope that keeps a man alive from day to day with only a caring letter.

The following poems originally appeared on Silva’s blog, Concrete Cage, which is maintained by a friend on the outside. Silva can be reached by writing Ricky Silva, L24722, Florida State Prison, 7819 N.W. 228th Street, Raiford, FL 32026-1000. –Lisa Dawson 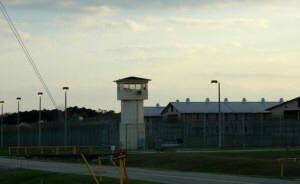 KILLED BY THE DARK

He sat in the darkness, for almost 10 years
Striding forward each day, swallowing his tears
He was not perfect at all, but he didn’t deserve this
To rot in a cell, with no one to love or to miss

He was quick to laugh, when he was feeling well
Or to tell a joke, to get us away from this hell
He was a man of his word, this I know to be true
If you gave him respect, he would in turn respect you

But with each passing day, his world became black
The darkness covering a world, he would never get back
Life became heavy, a great struggle each day
depression set in, and would not go away

Than one day the wing became loud, with everybody banging
The guards went to check it out, and they found Johnny hanging
They broke his fucking ribs, trying to pump air into his chest
And then let him die, saying that they did their best

Johnny for what it’s worth, I’m sorry you had to go
You were one of the few in here, I was happy to know
I can’t lie and say, it has not crossed my mind
I’ve come very close myself, from time to time

You were a warrior Johnny, make no mistake
But even a warrior, has only so much they can take
Just want you to know, you will be missed
Not just another soul, claimed by the darkness

Beautiful colors dance,
across a velvet sky.
As a waterfall of souls,
waves it’s good bye.

With a deep breathe of tomorrow,
we live on today.
I was told to pay attention,
but never did pay.

The darkness of the past,
is now taking it’s toll.
As my pen unloads it’s ink,
my life slowly begins to roll.

I flush memories away,
though some I badly miss.
Even in a picture perfect moment,
I couldn’t picture this.

Stripped of all human rights,
though human we are.
Eating through a metal hole,
or between the likes of steel bars.

Locked away frozen in time,
sometimes even for years.
Laughed at when we cry,
for worthless are our tears.

The holidays come,
and slowly they go.
As we suffer a loneliness,
that makes us feel so small.

We send out letters,
often written in our tears.
And may not ever get a response,
and this is what we fear.

But with that one letter,
in which someone choose to respond.
We have the strength building,
that will allow us to go on.

So if you’re reading this reach out,
to someone in solitary.
Write a letter, it can’t hurt,
even if it’s not to me.

7 thoughts on “Voices from Solitary: Reach Out”