The degree of civilization in a society can be judged by entering its prisons.  –Fyodor Dostoyevsky 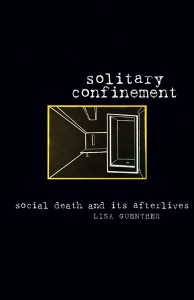 In recent years, resistance to the widespread use of solitary confinement has gained significant traction in the United States. Opponents of the practice have drawn upon everything from psychology and neuroscience to criminology and economics to show the many harms caused by solitary.

Lisa Guenther, associate professor at Vanderbilt University and author of the new book Solitary Confinement: Social Death and Its Afterlives, draws upon her knowledge of philosophy to make a thought-provoking argument against the practice of isolating human beings for extended periods of time.

Guenther refers to the tenets of phenomenology, which deals primarily with the development of the consciousness through first-person experiences—the formative relationships we share with one another and the objects that surround us. Solitary confinement, she argues, eliminates the opportunity for incarcerated persons to form these meaningful connections. Although the necessities of survival may be provided, those held in solitary deteriorate nevertheless. She describes it as an unhinging of the person’s psyche.

In an AEON Magazine article, Guenther contests, “We do not exist as isolated individuals,” but rather as constantly changing and adapting reflections of our living environment. Phenomenology suggests that while we may believe ourselves to have intrinsic characteristics unique to us, at heart we are products of the environments we interact with on a day-to-day basis.

Solitary confinement effectively removes all meaningful stimulus from prisoners’ environments, rendering them unable to ground themselves in a reality created by sensory connections. Guenther, in an article published in the New York Times, explains these sensory phenomena in simple terms:

Think about it: Every time I hear a sound and see another person look toward the origin of that sound, I receive an implicit confirmation that what I heard was something real, that it was not just my imagination playing tricks on me. Every time someone walks around the table rather than through it, I receive an unspoken, usually unremarkable, confirmation that the table exists, and that my own way of relating to tables is shared by others.

While these may seem like insignificant interactions with one’s environment to an average person, a phenomenologist would say that these are reassuring occurrences that should not be taken for granted. Being deprived of these interactions, as people in solitary confinement are, leads them to question their reality and develop symptoms associated with extreme isolation such as paranoia, hallucinations, and introversion.

Five Mualimm-ak, who spent a total of five years in solitary confinement later reflected on the experience: “The very essence of life, I came to learn during those seemingly endless days, is human contact, and the affirmation of existence that comes with it.” Without these subtle yet countless affirmations we experience daily, we too would have trouble discerning what is grounded in reality and what is solely in our heads.

While we don’t have to undergo this questioning of reality that individuals subjected to solitary confinement must, we on the outside are not unaffected by its practice. From a phenomenological standpoint, the complete seclusion of these prisoners from our shared environments restricts our capacity to understand the world in which we live. Solitary confinement is purposefully concealed from the public eye—out of sight, out of mind—and because of this we are denied the first-person experience so important in forming our thoughts, feelings, and judgments.

More transparency in our prisons would allow the public to better understand the treatment that isolated inmates undergo, and give them a greater ability to critique and formulate alternatives to their practices. The absence of isolated prisoners from our common consciousness perpetuates their suffering and our ignorance, a dangerous combination.

Accepting that humans are relational beings, Guenther suggests that the sensory deprivation that people in solitary undergo is sufficient to unhinge their minds. They are forced to question everything with which they interact. And as they begin to reflect their morbid environment, they lose their sense of what it means to be human.