This post is the next in a series of pieces Solitary Watch is publishing as part of a project calling for people held in solitary confinement to write on various proposed themes. Our second suggested theme, “Analyzing Isolation,” calls for writers to provide their analyses of solitary, discussing ways in which the practice is harmful and counterproductive.

The following comes from Leon Benson, who spent 10 consecutive years in a 7 by 12-foot cell on 23-hour-a-day lockdown in the Secured Housing Unit (SHU) at Wabash Valley Correctional Facility.  In this powerful piece, excerpted from an essay entitled “Moral Lobotomy: Abolish Prolonged Solitary Confinement and the Mental Disorders it Causes,” Benson, 38, calls for a ban on prolonged isolation, asserting that the practice causes mental breakdowns in those subjected to it. He can be reached by writing: Leon Benson #995256, Pendleton Correctional Facility, 4490 W. Reformatory Rd., Pendleton, IN, 46064. –Lisa Dawson 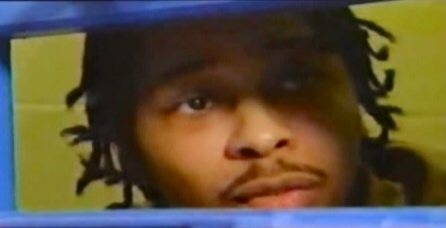 Leon Benson speaks from his tray slot at Wabash Valley Correctional Facility in IN (Photo: Screenshot from MSNBC’s Lockup series: “Shakespeare in the SHU“)

If I ever have known hell, it occurred during my years in solitary. I still can hear the unrelenting screams from other prisoners and the metal clanks of cell doors opening and closing. I still can smell the stench of fear. Existential purgatory is another way to describe it: You have no clue of when you will be released back to general population–it could be in 30 days or in 30 years.

Allow my words to be the catalyst for the much larger debate: Does prolonged segregation in Indiana cause mental breakdowns in prisoners? The answer is yes. The U.N. has long declared that prolonged solitary confinement is cruel and unusual punishment. (Articles 1 and 16 of the U.N. Convention Against Torture). This type of prolonged confinement is especially harmful to mentally ill prisoners. After class action litigation, Indiana federal courts, in December 2012, finally ruled to ban all mentally ill prisoners from being housed in any of Indiana’s segregation units; deeming the units toxic to prisoners with mental illness.

But what about segregation, especially if extremely prolonged, being harmful to any prisoner? […] These individuals are practically buried alive. Mainly due to administrative and not disciplinary reasons: A vindictive warden can lock a prisoner in solitary for years on mere speculation of wrongdoing.

Some of these men break down mentally and become zombies full of psyche medication. But most will be left with functional psychological damage. More than 80% of these prisoners will be released back into society someday. Dr. Terence T. Gorski proposed that these prisoners will suffer from what he calls Post Incarceration Syndrome (PICS). There is mounting evidence that PICS is a major contributing factor to the high recidivism rate.

Dr. Gorski’s concept of PICS in emerged from his clinical consultation work and rehabilitation programs with incarcerated and newly released prisoners. And he established that PICS is a set of symptoms that are present in many prisoners that are caused by prolonged incarceration in general population settings. However, the symptoms are most severe and prisoners subjected to prolonged solitary confinement.

PICS is a mixed mental and personality disorder with five clusters of symptoms:

• Institutionalized personality traits resulting from the common deprivations of incarceration–a chronic state of “learned helplessness” in the face of prison authority and antisocial defense in dealing with a predatory prison environment.

• Post Traumatic Stress Disorder (PTSD) caused by traumatic experiences before and during incarceration with symptoms such as flashbacks, intense distress, irritability, hyper-vigilance, and paranoia.

• Antisocial personality traits, the direct result of internalize coping behavior required to survive in a harsh environment that has two sets of survival rules–passive aggression with guards and active aggression with predatory prisoners.

• Social sensory deprivation syndrome caused by the effects of prolonged solitary confinement that imposes both isolation and sensory deprivation. Symptoms include chronic headaches, inability to concentrate, we pressed rage, and obsessive thinking.

• Reactive substance use disorder which often occurs with prisoners who use addiction and drugs to cope with PICS.

Releasing these prisoners back into society with such severe symptoms will only create devastation and chaos. They will be less likely to get and maintain jobs and more likely to commit crimes, disrupt families, and to need healthcare. All of which will bring a heavier toll on community stability and tax payer money better spent in other areas…

This epidemic of systematically destroying prisoners’ lives beyond repair can be prevented. All that needs to be done is to change the ineffective policies that promote high incarceration rates for nonviolent crimes, the use of extreme prolonged solitary confinement, and the restrictions on educational, vocational, and rehabilitation for people while in prison. To promote alternative laws and policies would reap huge benefits, not only for the many prisoners currently suffering the trauma of prolonged solitary confinement, but for the greater good of all society.