Voices from Solitary: "That Which Does Not Kill Us..."

The following comes from Glenn T. Turner, 40, who has been held in solitary confinement at the Wisconsin Secure Program Facility (WSPF) since 2010, when he was assigned to the facility’s General Segregation Program Process. In his piece, Turner, who has been in and out of solitary confinement since 1992, provides a firsthand account of the devastating effect isolation has on people. He can be reached by writing: Glenn T. Turner #244614 A, WSPF, P.O. Box 9900, Boscobel, WI 53805.  –Lisa Dawson 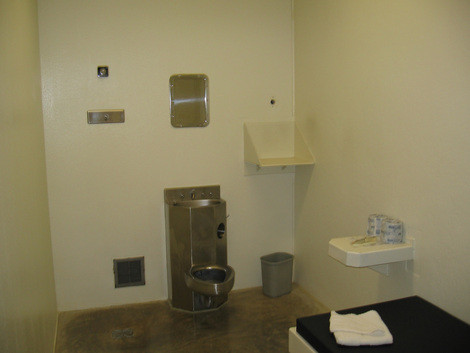 I am a prisoner housed in the Wisconsin Department of Corrections at the state’s most secure institution, that being the Wisconsin Secure Program Facility (WSPF). I am presently on a status called Administrative Confinement (A.C.) which is allegedly a non-punitive indefinite solitary confinement status. Thus far I’ve been on this status since May 10th, 2010. That’s on this particular stay on A.C. and I say “this particular stay” because this is not my first time placed on this status by DOC officials…

I speak not as a passive observer, nor from hearsay or second, third, or fourth hand information. I do not imagine the things I speak of, for I personally live it daily.

I’ve been incarcerated since October 18, 1991, and I have completed to date a total of nineteen and a half (19 ½) years of my bit in solitary confinement of one sort or another with very brief moments in general population. I have never been on voluntary segregation confinement, involuntary protective custody, or voluntary protective custody. I have completed every form of program available to me while in solitary confinement and DOC officials have continued to maintain me on A.C….

What has now become a convenient cause to put prisoners on administrative confinement for indefinite segregation in solitary confinement for years on end is to label the prisoner a “gang leader…” In this prison system that has never had a history of serious gang activity, this practice is suspect.

The German philosopher Nietzsche [said], “That which does not kill us makes us stronger,” which may or may not be valid. From my own experiences and observations from being in solitary confinement over the years…I have witnessed men having mental and emotional breakdowns so intense that they need to be prescribed anti-psychotic medications and clinical therapy.

I’ve seen prisoners who were unable to endure such long terms of confinement in solitary attempt to commit suicide, smear their fecal matter over their bodies, cells, and even eat their body waste. I’ve witnessed them cut themselves, and some who – lacking any sharp object to cut themselves with, use their teeth to rip their flesh so as to expose their veins and rip those out to spray their blood all over their cell doors, windows, floors, etc.

I’ve seen yet others simply cry like unfed, hungry babies all day and all night, and some lash out yelling and screaming all day, all night, banging on walls and cell doors, trying to get some form of acknowledgement from their jailers that they are human beings, only to be sprayed with various forms of chemical agents, left incapacitated in their cells. Only then to be taken and have their cloths cut from their bodies and put nude into a yet more restrictive type of segregation status, called “control status.” There, they have nothing in their cell but a concrete slab to sleep on, a stainless steel sink and toilet combo, a surveillance camera and 24 hours a day of bright light cell illumination.

Removal from this status is determined by “a white shirt” [supervisor]. No standards or process is due or available. We only have a potentially mentally and emotionally disturbed prisoner at the mercy of a sadistic and possibly masochistic white shirt, who knows no limits and has no psychiatric training.

While the prisoners mentally and emotionally regress, [a prisoner with mental illness] is often cheered on and encouraged by bored corrections officers to regress even lower. I’ve witnessed officers…encourage a mentally ill prisoner who had smeared feces all over his control cell window, to lick it off, and they would give him some milk. And this prisoner licked most of the fecal matter off of the window, and was “awarded” by the officer who threw an old milk to the prisoner through a lower trap door to the cell.

This is the jailer who finds this misery excitement from the long boring and mundane hours spent doing nothing, who then goes home and recounts the details of these events at the bar while bragging on how he gets paid for sitting on his ass doing nothing – while his fellow men rot. And there are those prisoners who seek the ultimate out who kill themselves. I have seen this happen as well. I have been awoken from my sleep by a guard…to tell me another prisoner I did not know had committed suicide, an attempt to discombobulate me.

Lastly, there are these few prisoners who observe and bear witness to these injustices and this uncivilized behavior, who develop within themselves an intense disdain for abuse of power by those in a position of authority, a total hatred for injustice and bigotry of any sort. And who desire a change and to that end they dedicate their lives. When these prisoners speak up against these systematic abuses, they are labeled a “threat,” “gang leader,” or “combative,” and are punished with an even longer stay in solitary confinement.

It should be understood that the treatment of these men is at present and will even more in the future have a detrimental effect upon society. Crime becoming more serious, wholesale, random, gruesome, seemingly more animalistic, inhumane and senseless. Having absolutely no rational or reasonable point or purpose. Leaving society’s leaders, behavior analysts, psychologists and therapists scratching their heads in bewilderment, asking why human beings are doing these things?

I end this testimony with a fitting quote from a French philosopher named Albert Camus, from his book, The Rebel:

Twenty-seven years in prison do not, in fact, produce a very conciliatory form of intelligence. Such a long period of confinement produces either weaklings or killers and sometimes a combination of both. If the mind is strong enough to construct in a prison cell a moral philosophy that is not one of submission, it will generally be one of domination. Every ethic based on solitude implies the exercise of power.

I salute the conscious mind and impose upon it a responsibility to be accountable.

5 thoughts on “Voices from Solitary: "That Which Does Not Kill Us..."”