This post is the next in a series of pieces Solitary Watch is publishing as part of a project calling for people held in solitary confinement to write on various proposed themes. Our second suggested theme, “Analyzing Isolation,” calls for writers to provide their analyses of solitary, discussing ways in which the practice is counterproductive.

The following comes from Robert W. Howe, who was serving his fourth year at federal supermax ADX  Florence in rural Colorado at the time this piece was written. According to his letter, he will have spent almost a decade at the federal supermax upon his release to a lower security prison (so long as he receives no write-ups for rule violations). In his piece, entitled “Thoughts from Inside the Control Unit: A Prisoner’s Perspective,” Howe describes the effects of “being physically confined in an extremely small cell for years on end.” –Lisa Dawson 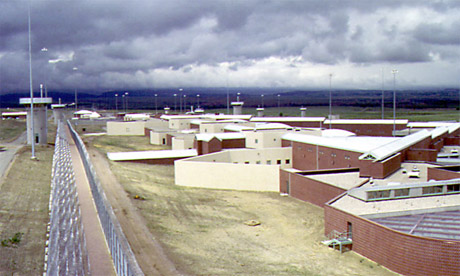 The control unit at U.S. penitentiary max in Florence, Colorado, is a 23-hour a day lockdown facility, where I am currently serving a 95-month administrative sentence. I was given this sentence for taking a correctional officer hostage for two and half hours at USP Atwater in October 2007. I was given an additional life sentence for the hostage incident. The administrative 95-month sentence is the FBOP’s way to seek some form of retribution for my actions. Now the BOP will say that I’m not being punished. By the end of this essay I would like for you, the reader, to determine where the truth lies. There’s three sides to every story: their side, my side and then there’s the truth…

Into my fourth year here at the federal supermax control unit, certain issues are becoming readily apparent. Psychological strains of anxiety and bouts of mild depression are beginning to surface in this stark encapsulated environment. I find myself constantly rearranging the small amount of property I’m allowed to keep. I do this in order to break up the samenesss of my cell and the “Groundhog Day” effect of repetitious occurrence.

The consequences of being physically confined in an extremely small cell for years on end have already begun to take a toll. Since my arrival here, I have suffered prolonged hypertension, necessitating blood pressure medication and chronic care visits. The optometrist gave me glasses and told me that individuals who are confined lose their vision at a higher rate due to the fact that we don’t get to use our long distance vision. I have joint pain from the never-ending hard surfaces, vitamin deficiency from lack of natural sunlight and probably others that would take a professional to diagnose.

While it is true that one doesn’t need to worry about being in a physical altercation in the control unit (except with staff), the assault on your physical being and mental state is constant and unrelenting. When this facility opened, it was labeled as “one of the most psychologically debilitating places on earth” (Newsweek, July 13, 1998).

I have been amazed at the physical conditions. The parts that I have been subjected to are antiseptically stark. When I arrived here, I was placed on A-Range in the Special Housing Unit (SHU), which always smelled of mace, feces, urine and the musk of unwashed bodies. That is where dysfunctional inmates who have severe mental and/or disciplinary issues were kept. The control unit has its own version of A-Range, albeit scaled down to a few glass houses, which are cells with Plexiglas on the bars. Even here in the control unit, where rigid protocols are claimed to be enforced, inmates with psychological issues are supposed to be screened out. Yet I find it fascinating that I continue to observe individuals who have degenerated into babbling, banging, crying and erratic behaviors, including successful suicide.

The jaded attitudes of staff and inmates alike seem to incubate a culture of pervasiveness and apathy. My observations these past few years have detected unconcern, psychological degradation and outright alienation of the mentally ill. The psychology department’s attitude towards control unit inmates is dismissive at best and unscrupulous at worst…

Most control unit inmates were at one point social creatures similar to regular individuals with the exception that they’ve been forced to inhabit an unnaturally sterile microcosm in an environment that restricts social means not just with other inmates, but also with family and friends. When the administration only allows someone one 15-minute phone call per month, and restricts the amount of mail they can send out by providing stamped, addressed envelopes under the guise of a “security issue,” instead of selling them on commissary, that is an administrative penal effort to staunch social interaction. When you go to team hearings, they request that you have good familial ties, and if you don’t, points can be added to you security score, which of course they control. The average inmate in the bureau supposedly gets 300 minutes each month of phone time and “unlimited” mailing privileges. It’s almost Kafkaesque, the treatment disparity we incur. Even Senator John McCain said of extended solitary confinement, “It’s an awful thing, solitary… It crushes your spirit and weakens your resistance more effectively than any other form of torture or mistreatment.”

…If I am able to remain incident free, I will not be eligible to leave ADX until I have almost a decade ensconced in this environment. What amount of resilience am I going to need to stay sane, much less remain socially acceptable to my peers? I feel like Sisyphus, forever sentenced to roll my boulder up the hill, only to find myself at the bottom with no end in sight.

Control unit confinement is a beast unto itself. Federal courts have given prison administrators carte-blanche to run their operations with little to no oversight. With the emphasis here on “control,” control implies being controlled by someone or something. The question begs then, with the body controlled, what price does the mind suffer? The influence of physical control on the body has serious significance on one’s mental state. There is no human being that can tell me this environment is conducive to even fair mental health; even those who work and study this environment lead compartmentalized lives.

Only total immersion can give one a clarified truth. Control units are allegedly subjected to human rights standards… The conditions of control unit confinement are both physically and mentally severe. They are disproportionate to legitimate security needs and inmate management objectives. They disregard the very real need for significant human contact, which shows a stunning disregard for us as human beings.

There are a couple of old sayings: “familiarity breeds contempt” and “absolute power corrupts absolutely.” Together they form the spirit of supermaximum ideology. Unfortunately there is no measurement taken for misery and suffering… The absence of normal social interactions, exposure to non-natural environments, and any semblance or perceived normalcy all are detrimental to the physical, mental and spiritual self. I know beyond a doubt that prisoners who are exposed to years or decades of hostile control unit environments experience rage, depression, despair, anxiety and a plethora of other issues.

The provisions that are made for control unit inmates are almost non-existent. More often than not, the psychological staff representative at team hearings, which occur monthly, are silent, asking no questions. Yet they base their reports on those two to five-minute interludes… They do not make rounds in the unit. They come to your cell if you request any form of treatment, with your outer door open so that all four of them can get in your sally port. Now everyone on the tier can hear your innermost thoughts…

Inmates who have diagnosed yet untreated serious mental illnesses should not be housed alongside inmates who are trying to maintain their fragile grips on sanity in a control unit environment. It is not fair to the mentally ill inmate, and it creates an unnecessary burden on those inmates who are forced to deal with seriously mentally ill inmates who would not be in this environment if the administration would follow their own protocol… One could surmise that forced transference may be a precursor to perfectly normal inmates acquiring symptoms and issues of their own. This breakdown by the psychology department at ADX, as well as administrators, shows a dereliction of duty to the degree of deliberate indifference.

In closing, unless a true and meaningful effort is made to address this extremely serious problem, it will only continue to get worse, leaving a blemishing stain on the conscience of a society that claims even prisoners deserve to be free of physical and mental torture (as stated in the Eighth Amendment of the U.S. Constitution).

2 thoughts on “Voices from Solitary: Analyzing Isolation, Part I”