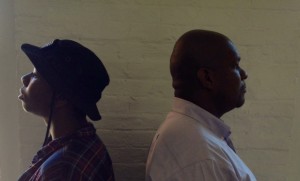 The following piece was jointly written by Five Mualimm-ak and Shaquille Mualimm-ak, who are father and son. Five Mualimm-ak is now a prison reform activist and director of the Incarcerated Nation Campaign. While incarcerated in New York State prisons, he spent five years in solitary confinement for nonviolent disciplinary infractions, and has written previously about its effects on him. Here, both father and son describe the effects that the years of separation and isolation had on their relationship. Shaquille grew up with little contact with his father, since individuals in disciplinary segregation in New York are most often denied visits and phone calls.

The title of the piece refers to the practice, common in New York and many other states, of locking down two people in a cell together for 23 hours a day–a form of extreme isolation that many describe as worse than solitary confinement. Here it suggests the idea that isolation affects not only prisoners, but also their families–that loved ones also “do time” in solitary.  –Jean Casella

[Five] During my time of incarceration, I always stood tall and strong. I was sure of my innocence and was determined to battle those charges to the end. I imagined myself one day being vindicated, and when that day came I knew I would fight back against a system that had wrongfully imprisoned me, and then tortured me with years in solitary confinement.

I would one day leave that tiny cell that had grown to be my only landscape. So familiar were those walls that even closing my eyes could not erase the sight burned into my retina. Trapped there 23 hours a day, week in, week out, month after month of endless hollow chatter that I could never get out of my head , the distant conversations of muffled voices. I cannot remember when I started talking to myself but soon even that began driving me insane. I would one day not feel trapped like a caged animal–though unlike me, caged animals have rights and people who protect them from abuse and intentional harm.

I would one day see my son. I could tell from his letters that he really needed me. He was having to face the world alone and without me there to be by his side. I lost the ability to focus on the exact details of his face, and then my thoughts would drift to: Who is there for him? Who walks him to school? Who is making sure he is eating right? I hope he knows diabetes run in our family. I would reread his letters to me a thousand times, but they brought no ease to the pain of missing my child.

Even though I used the word “I” to describe my experience inside, it wasn’t until I met the child, now a man whom I call my son, that I realized I was never sentenced alone. Throughout my time I was double celled. I was locked away and out of his life, but still we were both trapped in this perpetual cycle of distance. Beyond those walls topped with razor wire, beyond the guard tower with armed men waiting to shoot down any attempts to escape this world inside of a bigger world–there was my creation, my young son, whom I couldn’t reach, and in some ways still can’t. Yet I’ve learned that he, in fact, was isolated from me and at the same time sentenced to be mentally confined with me for over 1,825 days…

[Shaquille] 1,825 days I spent isolated from the man I call my father;  the man I was a spitting image of; the man who had the answers to problems I faced as a growing teen. Problems such as puberty, sex, hormonal rage, and many other things teenage boys typically go through were uncomfortable to talk to my mother about. I didn’t know how to bring those conversations up to her, and she didn’t know how to respond or what to say the seldom times I attempted it.

I needed my father at that crucial time in my life to show me how to be and act like a man. All around me at school I had friends with absent fathers or fathers who were also incarcerated and they ended up picking up drugs or ditching class because they didn’t have anyone to guide them and explain to them the importance of an education. Luckily I had a good mother who would steer me back in the right direction when I fell off course. But emotionally and mentally, I felt damaged by the lack of understanding she had for my teenage issues. A parent can only teach you but so much. I had to make a conscious decision to follow and apply the principles she taught me at home in my day to day life. I had to teach myself how to overcome the problems I faced as a poor black teen, and make good decisions when not in her presence.

The confinement of my father felt like I too was incarcerated, doing the time right along with him. Communication with him was difficult because of the circumstances he was under. I felt angry. I was pissed off at the world, and I knew that a lot of my minority peers were too, because they were in the same boat as me. A lot of them ended up getting caught up in the vicious cycle of repeating their incarcerated parent’s crime or something similar to it.

Solitary confinement not only kept my father locked in a box, but it kept him locked out of my life. It’s not hard to see that this system of ‘justice’ is corrupted when we are aware of the psychological effects that locking a parent out of the life of a growing child can have on the mind of that child. Even though I was physically free, mentally I was trapped in a 6×9 cell, isolated from my parent, the only man in my life, and locked into a sentence of solitude. As much as I stated “I,” it was more like were both doing time.