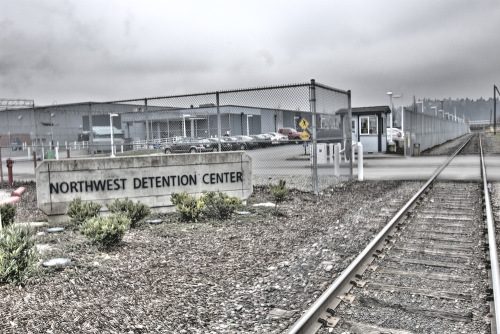 Nearly a month ago, at least 750 immigrant detainees at the federal government’s Northwest Detention Center in Tacoma, Washington, went on hunger strike. The strike included about half the detainees at the 1,500-bed facility, which is run by the GEO Group, the nation’s second largest private prison contractor. Individuals are held at the detention center pending investigation for possible deportation by U.S. Immigration and Customs Enforcement (ICE).

According to participants, the hunger strikers were protesting the national policy of mass deportation, as well as their conditions, food, and low pay received for work they perform at the detention center. Eventually, most of the strikers resumed eating, but on March 24, a smaller group began a second hunger strike.

Three days later, ICE began placing these hunger strikers in solitary confinement, where they are isolated for at least 23 hours a day and deprived of all contact with other detainees. According to a lawsuit filed yesterday in Federal District Court in Tacoma by the ACLU of Washington and Columbia Legal Services:

The Plaintiffs represented by ACLU-WA and CLS were placed in solitary confinement after corrections officers entered their living area and invited approximately 20 detainees to meet with an assistant warden to discuss their reasons for engaging in a hunger strike. The Plaintiffs and other detainees who volunteered to attend the meeting were immediately placed in handcuffs and taken to individual isolation cells. Plaintiffs were not told why they were placed in solitary confinement nor how long they would have to live in isolation.

The ACLU and CLS are seeking a temporary restraining order (TRO) to prohibit ICE from retaliating against the hunger strikers, whom they say are engaging in a peaceful protest and are protected by the First Amendment.

There is some precedent for immigrant detainees staging hunger strikes to protest conditions–and being placed in solitary in retaliation. A 2012 report by the National Immigrant Justice Center and Physicians for Human Rights described the widespread use of solitary confinement in immigrant detention.