Voices from Solitary: A Day in the Life, Part III

This post is the third in a series of pieces Solitary Watch is publishing as part of a new project calling for people held in solitary confinement to write on various proposed themes (read the first and second entries here and here). Our first suggested theme, “A Day in the Life,” calls for writers to describe a day in his or her life in solitary confinement.

Not long ago, Joseph Dole, occasional contributor to Solitary Watch, kept a daily log in which he chronicles three weeks of his life in solitary confinement in the now-closed Tamms state supermax as part of the Anne Frank Prison Diary Project. The following is an excerpt of what he wrote. The full text can be found on the Real Cost of Prisons Project, which maintains an excellent collection of writing by people behind bars. Dole can be reached by writing: Joseph Dole, K84446, Stateville Correctional Center, P.O. Box 112, Joliet, IL 60434. –Lisa Dawson 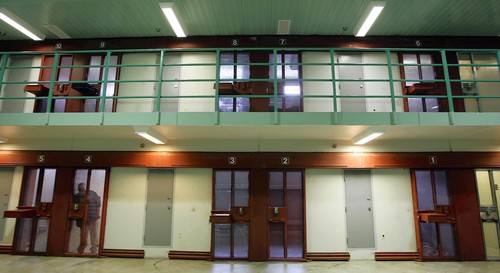 I’m really getting started late today. I just got out of bed about fifteen minutes ago and only got about five hours of sleep. Five interrupted hours of sleep though as Yip and Yap were sporadically going at it all night. These guys drive me nuts but I get along with both of them and try to understand that not only are they clearly mentally ill, but also that a lot of what they do are clear symptoms of what is commonly referred to as “SHU Syndrome” (Secure Housing Unit Syndrome) and what we call Tamms Syndrome.

What cracks me up is that they are completely oblivious as to how much they disturb the rest of the wing. They were screaming at each other in the middle of the night and in the wee hours of the morning and thirty seconds after they stop one of them calmly calls me as if nothing has been going on, and asks me to spell a word for him – at five in the morning, when I know at least two other guys are trying to sleep.

Most days I feel like “information”, you know, when you call “411”? Or nowadays I guess it’s more like “Ask Jeeves”. Instead I’m like “Cell Seven how may I help you?”. All day every day guys are calling up here asking me to help them with stuff, or to ask me questions, or to look something up, etc. Some days I just have to tell everyone to stay off my door. Otherwise I’ll never be able to finish what I need to finish.

One guy – Yip, one of the screamers – I have to intentionally be rude to for him to leave me alone. If I don’t he will try and start a thousand conversations just so he can have something to do. He can’t read past like a first grade level. The only genre that holds his attention long enough to even make him try to read are books about street life or erotic novels. He has so little knowledge about nearly every subject imaginable that the majority of his questions are completely illogical and even when they are coherent enough for you to understand them you need to explain a hundred other things first. The whole time though he’s not really interested in the conversation. He just wants to hear someone talk. Whenever the conversation starts winding down he’ll ask another question which usually has no connection to what you were talking about, or just as often evidences that he didn’t listen to anything you just said.

Why does he do it? Because he’s in his cell with no TV, no radio, uneducated, and can’t read or write to pass the time. So his choice is usually to try and get someone to talk to him or scream at Yap his nemesis. He is so desperate to talk to anyone that he drives the guards crazy hitting the emergency intercom button, stops the guards every time they come on the wing every half hour to make rounds (to make sure no one escaped or that no one else has killed themselves) and every time he sees anyone come on the pod he screams at the top of his lungs, all to try to get them to come talk to him. Why they put him in cell #1 (the only cell that can see everything that happens out in the main area of the pod) is beyond me. They hate him screaming for people yet put him in the only cell that gives him a view to even know that someone has entered the pod. He knows every employee in the institution and nearly every mundane detail of their personal lives. The car they drive, which of their family members work for the IDOC, who they’re dating, married to, etc.

I went off on a tangent again. Back to feeling like “Ask Jeeves”. For the next few hours I’m going to log every time someone calls up here and asks me for help or information. There are only eight guys on this wing altogether. One, Yap, is completely antisocial. The only time he has talked to anyone in the past month was when screaming or cussing out another guy. (Yip). Anyway I’ll start by recording what has already happened:

Cell #1 – Asks me if I know what the temperature will be today.

Cell #1 – Tries to start a conversation. I tell him it’s too early for that.

Cell #1 – Asks me what’s going on in Liberia (He pronounces it Libreria, but actually means Libya).

Cell #6 – Asks me how to calculate compound interest.

Cell #1 – Asks me, if “technically” is spelled t,e,m,e,r,i,t,y. He’s looking at “temerity” in the  dictionary. It takes me five minutes to try and figure out what he’s actually looking at though because what he actually asks is “Is ‘technically’ spelled e,t,t,e,r,t,e,m,r,t,y?”

I say “no”. He’s obviously dyslexic. Instead of trying to teach him to read to even minimally prepare him for release next year, the administration would rather deny him any education and send him out as an illiterate 41-year-old parolee.

Cell #2 – Asks me if I know of any legal cases that show that if your defense attorney argues to the jury that you should be found guilty – that that constitutes ineffective assistance of counsel.

Cell # 8 – Asks me about a new case that says Miranda rights can be curtailed for terrorism suspects.

Cell #1 – Asks me about electronic filing in federal court.

Cell #1 – Asks me about jurisdiction.

Cell #3 – Asks me about constitutional issues for a Post-Conviction Petition.

Cell #2 – asks me to look up a statute for him and explain part of it. etc. etc, etc. Some days this is normal, some days it is much worse. Once in a while an anomaly occurs and no one calls me all day. I love those days!

2 thoughts on “Voices from Solitary: A Day in the Life, Part III”