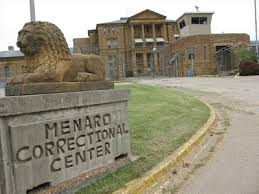 A little over a year ago, the notorious Tamms Correctional Center was closed, after a long battle by activists and with the support of Governor Pat Quinn. Individuals were rehoused in prisons across Illinois, including Menard Correctional Center, the largest maximum-security institution in the state. While few would argue that it is anything but an improvement over Tamms, according to some prison advocates and individuals on the inside, Menard has also long been beset by problems. This past June, Solitary Watch featured a letter from an individual housed in segregation at Menard.  He describes what it is like to be double-celled in a space less than five feet wide.

On January 15, a group of individuals housed at the Administrative Detention unit at Menard went on hunger strike. The following is a letter from someone housed at the prison sent before the strike began, explaining the conditions that prompted the decision as well as the strikers’ demands. Since we did not have explicit permission from the author to use his name, we are publishing it anonymously. Over the past few days Solitary Watch spoke to prison advocates in touch with individuals on the inside, and also viewed several letters received since the hunger strike began.  According to these accounts, as of Monday, February 3, about 10 to 15 people are still refusing to eat.

The physical conditions on the inside have seemingly improved – guards have been cleaning the units and mental health staff are making rounds. However, the prison has so far still refused to provide written explanations for placement in solitary or publish a set of rules for “stepping-down” to general population.  Several hunger strikers said they received bogus disciplinary tickets and one person was reportedly beaten. Guards have also allegedly threatened hunger strikers with physical violence if or when they require medical attention, which is of particular concern since there are no cameras in the infirmary at Menard.

Solitary Watch contacted the Illinois Department of Corrections to ask for a comment on the ongoing hunger strike. Director of Communications Tom Shaer said that there was reason to suspect that the hunger strikers were getting commissary food from others in the unit, based on what he said were “normal or close to normal” ketone levels and less weight loss than what “is normally seen in actual hunger strikers.” He contested the allegation that individuals placed in Administrative Detention do not know why, telling Solitary Watch, “before being assigned to AD, every inmate has long since been interviewed about issues causing his placement and, thus, has a very good idea of the reasons.”  He said that the placement decisions and 90-day reviews contain confidential information, so issuing copies to prisoners could pose a security threat, and that AD “reviews/decisions are not made by one person and that the initial AD decision goes all the way up to the Director of the IDOC.”

Finally, Tom Shaer told Solitary Watch, “we don’t have Solitary Confinement in Illinois prisons.” As evidence he presented policy documents state that individuals in Administrative Detention have at least five hours of recreation outsides of their cells per week and two showers per week, in addition to two non-contact visits and one 15-minute phone call per month; those in Segregation are supposed to receive the same, minus phone privileges. These conditions–23-hour cell lockdown–do, however, conform to the definitions of solitary confinement provided by the UN Special Rapporteur on Torture and most human rights and civil liberties groups.

Update: After reading this post, Tom Shaer of the IDOC contested virtually all of the statements made in the following letter, saying that those in segregation have cleaning supplies; that their cells are not filthy, moldy, or cold; that they do have mental health assessments; they receive mail in a timely manner; they have access to legal boxes; and they and receive educational programming, though they sometimes must “wait in line” for it. The letter’s author and other hunger strikers stand by their allegations. –AS

I am in a part of segregation in Illinois DOC, in Menard CC, that has been designated “High Security Unit” – Administrative Detention. As I’m sure you know, Tamms supermax was shut down by Governor Pat Quinn. As all systems of oppression have the nature of a chameleon, the prisoncrats forced adjustment since the closure of Tamms has been to find new ways to do the same thing – repression. The High Security Unit (HSU) is being called by officers “mini-Tamms.” Tamms isolation camp is being replaced via the establishing of multiple “mini-Tamms” as here at Menard & in several seg units in medium security prisons…

The conditions here are inhumane & repressive. So much that we are forced to make a stand as men in righteous indignation.  We in HSU have planned a hunger strike on the 15th of January. We have put together a list of demands in individual grievances with the hope that it would shield us from administrative revenge. Our complaints are all pursuant to our constitutional rights & human dignity. Such as “implement uniform written policies that provide for constitutionally adequate ‘notice’ of why an inmate is being placed in Administrative Detention at the HSU, & reasonable, periodic review in the form of annual informal hearings that allow me to refute the alleged reasons why my placement in AD is being continued.”… No one here has been given ‘notice’ to why we’re here.

Other issues concern the conditions we’re forced to live in.

–     It is absolutely filthy here, we are provided no cleaning supplies to clean our own cells, no disinfectants, no toilet brushes, as of now all we’re provided with is a small 2”x3” sponge once a month, there are no written policies for the HSU that requires the daily sweeping & mopping of the wings, the showers are filthy & infested with mold, as of now the wing is never swept or mopped.

–     There is no mental health screening & evaluation of inmates prior to being placed in the HSU, there’s no specially trained mental health staff assigned to identity the deterioration of an inmate’s mental health due to long term isolation.

–     The mail, including legal mail, is not processed in a timely manner, as of right now, mail takes sometimes 3 weeks from the post mark to be delivered

–     There’s no reasonable access to our legal boxes, as of now, access is limited ot approximately once a month, this is unacceptable

–     The cells are cold more often than not, & we’re not allowed to purchase cotton blankets off commissary (the state issued blanket is thin & inadequate)

–     The food is not only awful & an unauthorized deviation from the statewide menu, but low calorie intake have us losing weight

–     We’re not issued our own individual coats, we have to share coats with numerous men that leaves a stink behind, some of us here are not even given coats at all.

These are some of the conditions we are forced to live under & have resolved to take a stand against thru peaceful protest. However, IDOC officials will interpret our righteous indignation as an act of aggression & challenge to their authority. And Menard CC, which is in southern Illinois, is notorious for their spiteful retribution. Public awareness is our only shield from unjust abuse of authority, which is why we ask for your support of our peaceful protest against our conditions of confinement. The HSU is a “new” program & we know not the economic incentive or who stands to benefit the most, so we know they will bring the heat. We only ask that on January 15, 2014, that you & your friends call the Governor’s office, the Director of IDOC S.A. Godinez, & the Warden of Menard CC, and inquire about our peaceful protest & our reasons & conditions of confinement.

Our conditions are inextricably linked to the social mobilization across the nation against the injustice of mass incarceration.  We hope that we have your support & we thank you.

Very truly yours in struggle.