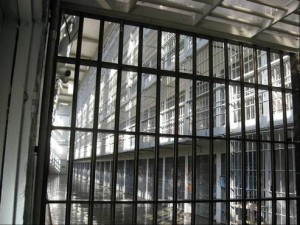 Menard Correctional Center is the largest maximum security prison in the state of Illinois. A December 2011 report by the John Howard Association, a prison watchdog group, depicts Menard as decrepit, overcrowded, violent, and subject to frequent lockdowns. In the Segregation Unit, two men are housed, often in continuous 24-hour-a-day confinement, in cells designed for one person. The cells are less the five feet wide, with most of that width being take up by bunks. When the Howard Association visited Menard in December, many men expressed concern about being housed with “aggressive cellmates.” In the three subsequent months, three men at Menard were killed, allegedly by their cellmates. A fourth, an apparent suicide, died in solitary in May. The following piece is by an individual serving a year-long stint in the Segregation Unit. He wrote to Solitary Watch describing the deaths, the overcrowding, the lack of physical exercise, and the psychological toll of life in isolated confinement at Menard. –James Ridgeway

Here’s a little insight on the conditions, mistreatments and violations that been occurring here at Menard Correctional Center Segregational Unit.

In Menard Correctional Center Segregational Unit 90% (percent) of the cells are double-man celled, and more than half of those cells are encased behind iron doors. (Note: many of the prisoners back here in the segregational unit are suffering from periodically being beaten, maced and abused at the hands of racist guards and ranking officials whim.) The measurements of the cells in this segregational unit are, from door to toilet (in the back of cell) is approximately 8 ft. 6 in. – from the wall to the edge of the bunk is 1 ft. 10.5 in. – the accessible floor space in this area for (2) two prisoners is only about a total of 13.5 square feet, from the cell entrance to the beginning of the bunk the measurement is or about 1 ft. 4 in. by 1 ft. 10.5 in. a total of about 2.8 square feet of non-accessible floor space.

Prisoners at Menard Correctional Center Segregational Unit are being forced to share a cell that the administration well knows are too small to house (2) two people, for these cells are all actually one man cells. Plus the fact, that many of us prisoners are sharing a cell with prisoners that’s on some type of psychotic medication and mood altering drugs, leaving some of us prisoners in a very dangerous and unsafe environment/situation. Now us prisoners must play psychologist with the institution mental and emotional disordered prisoners that we are forced to be housed with an more tan often this condition leads to violent and physical altercations between the two. (Note: (3) three of the deaths which occurred since January was because of cell mate–on–cell mate physical altercations which lead to one cellmate killing the other or one cellmate causing so severe bodily harm which lead to the other cellmate dying once returned from the outside hospital.

This institution (Menard C.C.) is in blatant violation of our eighth amendment constitutional rights not only amounts to cruel and unusual punishment, but it lacks the legitimate penological interest necessary to impose it.

In the case of Lightfoot v. Walker 486 7. Supp 528; The Illinois Department of Correction had a former medical Director of the IDOC, by the name of Dr. Ron Shansky, who testified that depriving prisoners of the minimum civilized measures of out of cell exercise and showers that is necessary to maintain a person’s physical as well as mental health; (especially those of us whose conditions are such that we are already confined to our cells 24 hours a day.) Dr. Shansky’s testimony being the local point of a successful civil suit brought by prisoners at both maximum security prisons – Stateville and Menard C.C., plainly served to give actual knowledge of an excessive risk to prisoners exhibiting the adverse psychological effects or deterioration of the cardiovascular system, hardened arteries, atrophying muscles, and musculo skeletal problems. Dr. Shansky specificially warned Menard Corrections what would eventually occur if these conditions continue and many of us prisoners are already exposed to these conditions both psychologically and physically.