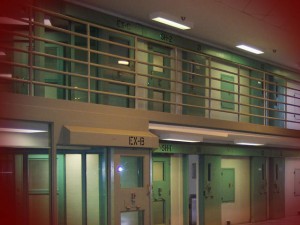 Sean Swain is has served 22 years of a 20-to-life sentence for a murder he maintains was committed in self-defense. He has done many long stints in solitary confinement, and is currently being held at the supermax Ohio State Penitentiary in Youngstown. A self-proclaimed anarchist, he has twice run for governor of Ohio from his prison cell. His writing appears at www.seanswain.org. The following comes from a letter to Solitary Watch written in December. He welcomes mail at: Sean Swain 243205, Warren CI, P.O. Box 120, 5787 State Route 63, Lebanon, Ohio 45036.  –Jean Casella

I arrived here at Ohio’s super-duper-uber-meza-ultra-max on 29 August. I call it that because super-max sounds so ridiculous. If maximum is maximum, the most, what can be “super” or “beyond” the maximum? If it’s more secure than the already-existing maximum, then it supercedes it as being the new maximum, but it doesn’t become super-maximum. This is my deliberate, hyperbolic use of multiple prefixes to heckle the state’s grammatical euphemists.

They even have to abuse language.

Since August I note there are days I experience heightened anger. I call them rage days. They happen seemingly at random and I am self-aware enough to know that my emotional response is exagerrated. Sometimes pencil cups tip over. It’s not a cause for murderous rage. So I breathe deeply and recall that the situation I’m in creates those symptoms, and I self-talk through recognizing the relative insignificance of a spilled pencil cup compared to all the very serious disasters happening in the world. Re-centering. Re-grounding….

I fear losing my mind. I rear that on a long enough trajectory I’m doomed. I’m like a flood victim stacking sandbags, contemplating that I can hold out for six months, or a year, and if I am ambitious and scramble, I can hold off the inevitable for 18 months, but sooner or later the water will begin to trickle over the top of the barricades and then…

Solitary confinement is waking every day already stacking the sandbags in your head to stave off the flood of irrationality that seeks to consume you…while operating within slow-motion mundanity of sensory deprivation. It’s almost comic, really, how those two realities, the internal and the external, are so oddly divergent. The internal feels like everything is emergent–bells and buzzers and sirens–and the external, that which triggers the internal madness, is less eventful the cows grazing or paint drying. But that’s just it. It’s the vacuum, the absence the gets the monkey of the mind scrambling for some kind of sensory toy to grab.

I smirk to myself when the shrink comes around once a week. He asks me if I’m OK. My response is always, “I think so.” It’s the best I can do when I know there are prisoners smeared in their own fecal matter and muttering to unseen demons and they tell the shrink, “Yes, I’m doing fantastic.”

I’m not smeared in fecal matter.

I don’t hear disembodied voices screaming at me to check my tire pressure.

I don’t tell him that I’m afraid. I’m afraid of the day when a shit suit sounds like a grat idea, when Shabriri, the Demon of Blindness, screeches at me about unsafe driving conditions…

I also consider the irony that this massive mind-fuck machine works feverishly, day-in and day-out, prying out my psychological fingernails with a pair of rusty pliers, and then sends around this poor, well-intentioned, professor-ish clipboard dragger to inquire about my well being, prairie-dogging through the plexiglass bulletproof windown of the steel door on my tomb, seeking signs of my inevitable mental disorganization.

A pencil-pusher was making rounds recently. Thru the bulletproof glass he asked me, “Do you know why you’re here?”

I responded, “Because there was an open cell available and the director doesn’t like my criticism of his policy?”

He looked side to side and saw the coast was clear. He shrugged. “Well, yeah,” was his reply.

Am I OK? I’m still stacking the sandbags. I haven’t given up.