The following report on the October 9 hearing held by the California legislature originally appeared on Truthout. The author, Victoria Law is a writer, photographer, and mother. She is the author of Resistance Behind Bars: The Struggles of Incarcerated Women (PM Press 2009), the editor of the zine Tenacious: Art and Writings from Women in Prison and a co-founder of Books Through Bars – NYC. She is currently working on transforming “Don’t Leave Your Friends Behind,” a zine series on how radical movements can support the families in their midst, into a book. Article copyright, Truthout.org. Reprinted with permission. 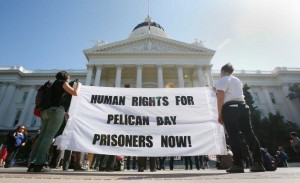 On Wednesday, October 9, the California legislature’s Public Safety Committee held the first of several hearings about the use of solitary confinement in California’s prisons. These hearings were prompted by a 60-day hunger strike that rocked California’s prison system this past summer.

On July 8, 2013, over 30,000 people incarcerated throughout California refused meals.

3.  Comply with the recommendations of the US Commission on Safety and Abuse in Prisons (2006) regarding an end to long-term solitary confinement;

Prisoners in Pelican Bay’s Security Housing Unit (SHU) issued 40 additional demands, such as expunging all violations issued for participation in the 2011 hunger strikes and prohibiting retaliation for those participating in the most recent strike.

In the SHU, people are locked in their cells for at least 22 hours a day. Prison administrators place them in the SHU either for a fixed term for violating a prison rule or for an indeterminate term for being accused of gang membership. These accusations often rely on confidential informants and circumstantial evidence.

Hundreds have been confined within the SHU for more than a decade. Until recently, the only way to be released from the SHU was to debrief, or provide information incriminating other prisoners, who are then placed in the SHU for an indeterminate sentence. SHU prisoners launched two hunger strikes in 2011. This past July, they launched what would become a 60-day hunger strike.

The strike ended after California State Senator Loni Hancock, chair of the Senate Public Safety Committee, and Assembly member Tom Ammiano, chair of the Assembly Public Safety Committee, promised to hold hearings around the issues raised by the hunger strikers. As reported earlier in Truthout, the legislators’ support pushed both the CDCR and the hunger strikers toward a resolution.

“On September 3, we received a copy of the press statement from Senator Hancock and Assembly member Ammiano using strong language in support of our cause, urging us to end our hunger strike with assurances of hearings, etc.,” hunger striker Todd Ashker told Truthout in a recent letter. “We’re not ones to snub lawmakers, etc., who pledge support – in public – in spite of CDCR’s vilification campaign.” Buoyed by legislators’ support and the promise of upcoming hearings, hunger strikers met and voted to suspend the strike.

“Now this doesn’t end our collective actions to shed light on and end solitary confinement and indeterminate SHUs, but instead is a time of advancing forward on an even broader front,” wrote hunger striker Lorenzo Benton the day after the hunger strike ended. “With the gains made (national and international support and a viable movement to achieve our objectives), we are now in a position to see our goal to the end with no further loss of life and/or serious physical or mental harm.  . . . We must not shy away from this golden opportunity to have our collective voices heard and end this mockery of the need for solitary confinement and indeterminate SHUs.”

On Thursday, September 26, lawyers presented oral arguments for Ashker v. Brown, a federal lawsuit on behalf of 10 prisoners in Pelican Bay’s SHU. The lawsuit alleges that prolonged solitary confinement violates Eighth Amendment prohibitions against cruel and unusual punishment and that the absence of meaningful review for SHU placement violates the prisoners’ right to due process.

Attorneys urged the judge to grant the suit class-action status. More than 500 people have been in Pelican Bay’s SHU for over 10 years; more than 200 have been there for over 15 years; and 78 for more than 20 years.  Class certification would extend the remedies in the case to apply at least to all Pelican Bay SHU prisoners who have been held in solitary confinement for more than 10 years.

Claudia Wilken, the federal judge hearing the case, said that she is likely to allow the suit to be expanded from the cases of 10 prisoners to include the approximately 1,100 people held in indefinite isolation. She set the trial date for November 3, 2014.

As reported earlier in Truthout, on August 23, the CDCR moved at least 50 hunger strikers to New Folsom Prison, just outside Sacramento, to provide them with better medical attention during their strike. Because New Folsom’s SHU and Administrative Segregation (Ad-Seg) were full, hunger strikers were housed in a portion of the prison temporarily converted into an Ad-Seg unit. “The cells are constantly cold, given that the cell’s air-conditioning is always on full blast, blowing out cold air,” Benton reported. “We are not allowed any yard activity or physical access to the law library.” Reports on medical attention were mixed: Benton stated that medical staff often “just walk by one’s cell and look in on you, usually with no comment.” However, Mutope DuGuma stated that both medical and custodial staff at New Folsom were “one hundred times more human than Pelican Bay medical/staff. We were actually treated fair.”

For many, the month at New Folsom provided them an opportunity to see the sky. Benton noted that his cell had a window providing him with a view of mountains, trees and birds “to which I am taking in each day, as well as the joys and the warmth of the sun, to which I/we have been denied for so long.” DuGuma too was able to see the outside world. “I haven’t seen a moon or direct sunlight in thirteen years,” he wrote. “It was beautiful.”

Once the strike ended, CDCR began returning prisoners to Pelican Bay and the other prisons where they were originally housed. Mutope DuGuma was moved on September 24. DuGuma noted that, like the ride to New Folsom, no medical staff accompanied the bus. In addition, he stated that prison staff  “didn’t lock the cages other than the gate that cut off to them, so the front and back could interact with each other. On the last five-and-a-half hours, they didn’t turn on the lights, leaving us free to move in waist chains and ankle chains.” Given the California prison system’s history of racially-based violence, DuGuma hypothesized, “I think the COs were trying to serve us a threatening message as well as test our end to all hostilities because we literally could have killed someone on this bus and got away with it.”

Although the hunger strike has ended (or been suspended, as some participants are quick to point out), hunger strike participants still feel the ramifications of going weeks, if not months, without food. Lorenzo Benton stated that he continues to feel occasional lightheadedness, aches and pains, fatigue, and wakes 10 times each night. “Being 58 years old, one’s body is not as young as it used to be, so one is aware it’s going to take a little time to reboot and rebuild this machine of mine.”

Mutope DuGuma, too, is still feeling the effects of going 60 days without food one month after he resumed eating. “I still got stomach discomfort, and my leg muscles have not come back. They feel like I am walking on stilts,” he reported after his return to Pelican Bay.

Marie Levin is the sister of Sitawa Nantambu Jamaa, one of the four main representatives of the Pelican Bay hunger strikers. “This is the start of something big,” she told Truthout just before a pre-hearing rally. She had visited her brother two weeks earlier and reported that, although he lost 62 pounds during the strike, both he and she were optimistic. “We’re looking forward to change happening in the SHU and in the California prison system.”

Inside the hearing, CDCR officials, academics, former prisoners and family members testified. Investigator General Robert Barton told lawmakers that of the 4,054 people currently held in SHUS across California, 1900 have life terms. Of these, 574 have been in SHU for more than five years, 197 for more than 10 years, 126 for more than 15, and 84 for more than 20 years. He also noted that 74 women are serving SHU terms at the California Institute for Women. (Because of overcrowding, however, 99 women were housed in the prison’s SHU as of July 2013.)

Steven Czifra, a student at UC Berkeley, was one of the last to testify. After four years as a model prisoner and days before his parole date, Czifra had a fistfight with another prisoner. Because Czifra is white and the other man was black, prison officials labeled the fight racially-motivated and sent Czifra to Ad Seg for a year. The following day, he spit on a guard who was taunting him. Those two incidents placed him in the SHU for four years.

The effects of those four years haunted him years after his release. “It took my partner five years before she could touch me without it hurting me,” he recalled. He urged legislators to take action, pointing to the research and findings presented by Margaret Winters, associate director of the ACLU’s National Prison Project, and Keramet Reiter, assistant professor at UC Irvine, earlier in the hearing. “We don’t need to research anything [more]. We already know without a doubt that long-term solitary confinement is torture,” said Czifra.

The hearing lasted four hours. Dolores Canales, whose son Johnny has spent 13 years in the SHU, was hopeful. She told Truthout that Johnny and others at Pelican Bay were hopeful. So was Nunn, who pointed out that the legislators’ support pushed prisoners to end the strike on its 60th day. Reminding legislators that an Irish hunger striker lasted 66 days on his hunger strike before dying, he said, “This hearing gives the opportunity for people to do something other than starve themselves to death.”

Writing from inside his SHU cell at Pelican Bay, however, Mutope DuGuma reminded Truthout, “Remember, we are in a protracted struggle. Therefore, a suspended hunger strike only means that it can be reignited at any given moment.” At the end of the hearing, family members and advocates seemed optimistic that such a course of action might not be necessary.