After 41 Years in Solitary, a Dying Herman Wallace Has His Conviction Overturned----and Is Freed 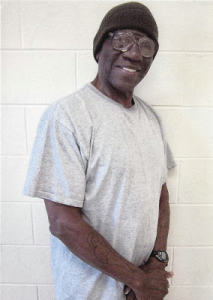 In a long article we wrote in 2006 on Herman Wallace and his case, we ended with a quote from a letter he wrote to Jackie Sumell: “I’m often asked what did I come to prison for; and now that I think about it Jackie, it doesn’t matter. It doesn’t matter what I came here for, what matters now is what I leave with. And I can assure you, however I leave, I won’t leave nothing behind.”

Update, 10/2/13, 7 pm: The latest details on Herman Wallace’s release and his condition can be found on Democracy Now! and the BBC World Service (featuring an interview with Solitary Watch).

Update, 10 pm: Angola 3 News reports that Herman Wallace is free from solitary and from prison:

Even after Judge Jackson’s late evening ruling denying the State’s attempt at a stay and again ordering his immediate release, the State continued to stall. Once notified of the continued delay, Judge Jackson stoically refused to leave his quarters until Herman was released, and just minutes ago, Herman was driven away from the prison a free man, awake and able to revel in this miraculous turn of events. The State will likely still appeal to the 5th Circuit and attempt to have the order reversed, and may even re-indict him, but it seems that Herman, against all odds, has won.

Following is the full text of a news release, “Dying Angola 3 Prisoner Wins Full Habeas Relief After 41 Years; Federal Judge Orders His Immediate Release,” issued by advocates for Herman Wallace. A post on Angola 3 News states: “We pray that Herman can still hear this all-important decision that he’s waited these four decades for…Albert Woodfox and Robert King are meeting at the prison this morning to say their farewells and and will instead have this amazing news to share with Herman and maybe even be able to take him home.”

Mr. Wallace, one of the “Angola 3,” who is dying of liver cancer, served over forty years in solitary confinement conditions in Louisiana prisons.

Following is a statement from Herman Wallace’s legal team:

“With today’s ruling, at long last, Herman Wallace has been afforded some measure of justice after a lifetime of injustice. We ask that the Department of Corrections honor Judge Jackson’s order and immediately release Herman Wallace so that he can spend his final days as a free man.

Herman Wallace, a member of the “Angola 3” was held in solitary confinement conditions in Louisiana prisons for over forty years, despite his strong claims of innocence for the 1972 murder of a prison guard in Angola prison. Mr. Wallace has fought his unconstitutional conviction for decades, and is supported by four alibi witnesses who place him in another part of the prison when the tragic murder occurred.

Mr. Wallace’s federal habeas petition was filed almost four years ago, and briefing was complete two years ago in the case. Today’s ruling mandates a new trial in the case, but Mr. Wallace is bedridden and dying of advanced liver cancer. It’s time for Louisiana to immediately release this 72-year old man with terminal liver cancer on bail so that he can receive proper medical care as his attorneys prepare for his new trial.

In 1972, Brent Miller, a well-loved, young, white guard at Angola prison, was killed. At a time when the prison was highly racially polarized, corrections officers quickly honed in on four suspects who were politically active Black Panthers.  In addition to Albert Woodfox, Herman Wallace was one of these men. As with Woodfox, there was no forensic or physical evidence against Mr. Wallace; he was convicted solely on the testimony of four inmate witnesses.  Each of these witnesses gave statements inconsistent with their testimony.  And, as Mr. Wallace learned decades later, these inmates were provided incentives by the State for their testimony.

For 26 years, the state unconstitutionally suppressed the deals it made with its witnesses in this case, including promises of improved housing and a pardon. The state also suppressed inconsistent statements by these witnesses, which would have been powerful evidence for the defense. Without the credibility of these witnesses, the state does not have a case against Mr. Wallace.

There was a bloody fingerprint and other prints at the crime scene, but none of these matched any of the men prosecuted for the murder of Mr. Miller. Prison officials have declined to test the prints against the 1972 prison population to determine who left them at the crime.

Mr. Wallace’s 3-day trial was fundamentally unfair. His attorney represented Mr. Wallace and two co-defendants, one of whom turned state’s evidence and witness against Mr. Wallace mid-trial, forcing Mr. Wallace’s attorney to cross-examine his own client, with no advanced notice.  The attorney later admitted he had no reason not to move for a mistrial but failed to do so out of “shock and confusion.” The attorney did such a poor job that he failed to even file an appeal when Mr. Wallace was found guilty and sentenced to life in prison for murder.

Sixteen years after his original trial, Mr. Wallace obtained permission to file his own appeal pro se, which made its way through the Louisiana courts for 19 years.  Though his appeals were summarily dismissed with a word or a sentence, there has never been a written opinion explaining why the facts and the law do not require a new trial in this case.  However, dissenting judges (and the state court Commissioner) have written in detail to explain that the serious constitutional deficiencies in his trial require that Mr. Wallace’s conviction be overturned.

Four years after it was filed, Mr. Wallace’s habeas petition won full relief today from a federal court judge. Due to Mr. Wallace’s failing health, it is urgent that the court grant him bail immediately.

In addition to his wrongful conviction and life sentence, Mr. Wallace was additionally punished by prison officials, who kept him in solitary confinement conditions for over forty years, despite decades of exemplary behavior. The extreme duration of solitary confinement in the case of three men, including Mr. Wallace, has drawn international condemnation of the treatment of the ‘Angola 3’.

As one judge wrote, the extreme length of Mr. Wallace’s solitary confinement was “so far beyond the pale that this Court has not found anything even remotely comparable in the annals of American jurisprudence.” Wilkerson v. Stalder, 00-Civ-304 (M.D.La)

Cruelly, prison officials also neglected to provide basic health care, including monitoring Mr. Wallace for liver cancer, which he was known to be at risk of developing.  Liver cancer is treatable if caught in a timely way.

In summer 2013, after Mr. Wallace lost 40 – 50 pounds, he was given a medical assessment and found to have advanced and terminal liver cancer.  Even after this diagnosis, it took over a month for Mr. Wallace to get chemotherapy treatment. That’s why an oncologist and a specialist in internal medicine and geriatric patients have submitted sworn affidavits recommending that Mr. Wallace should be immediately released for medical reasons, so that he can receive adequate medical and palliative care.

Mr. Wallace’s 1974 trial was unfair and unconstitutional, with illegally suppressed evidence that would have cast doubt on the state’s only evidence against him – four witnesses with undisclosed motives to testify, at least one of whom has recanted his testimony entirely in a sworn affidavit. Mr. Wallace’s pending habeas petition offers the court the opportunity to address this egregious miscarriage of justice.

For decades Mr. Wallace has endured the torture of solitary confinement and has fought for the opportunity to present his case in court showing his innocence. At this time, Mr. Wallace is in poor health, with liver cancer. The state should release him on bail so he may receive adequate medical care.

49 thoughts on “After 41 Years in Solitary, a Dying Herman Wallace Has His Conviction Overturned----and Is Freed”