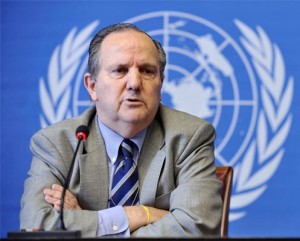 The use of solitary confinement in California prisons can amount to “cruel punishment, even torture.” This is according to a recent news release from the Office of the United Nations High Commissioner for Human Rights (OHCHR), in which UN Special Rapporteur on torture Juan Méndez addresses the issue of solitary confinement in U.S. prisons and specifically those in California.

The statement came as nearly 100 people in three California state prisons were engaged in day 47 of a prison hunger strike. The hunger strike began on July 8, with more than 30,000 prisoners in two thirds of California prisons refusing food in protest of long-term segregation and inhumane conditions.

Méndez, who is a former political prisoner, asserts that prolonged solitary is cruel and inhumane, stating that even short periods in isolation often cause “mental and physical suffering or humiliation, amounting to cruel, inhuman or degrading treatment or punishment, and if the resulting pain or sufferings are severe, solitary confinement even amounts to torture.”

The UN rights expert urges the U.S. government to place restrictions on use solitary to ensure that the practice is “only imposed, if at all, in very exceptional circumstances, as a last resort, for as short a time as possible and with established safeguards in place.”

Méndez further calls for an unconditional ban on solitary confinement of any length on children, people with disabilities, women who are pregnant or breastfeeding, and those serving life sentences or on death row.

Of particular concern to Méndez are the approximately 4,000 people who are held in California’s Security Housing Units (SHU) on an indefinite or prolonged basis.

Referring to a District Judge’s recent approval of California’s request to force-feed prisoners, the release quotes Méndez as stating that “it is not acceptable to use threats of forced feeding or other types of physical or psychological coercion against individuals who have opted for the extreme recourse of a hunger strike.”

Méndez has in the past repeatedly addressed the matter of segregation in U.S. prisons. The release specifically notes his 2011 report to the UN General Assembly and his “numerous communications to the Government” in which he calls on authorities to allow for an assessment of the country’s use of isolation by a UN expert.

Following up on Méndez’ efforts, a coalition of civil and human rights groups called on the U.S. government in June to extend the special rapporteur a formal invitation to assess the country’s use of solitary. To date, the U.S. government has said only that it is in the process of considering the request.

Concluding his recent statement, Méndez underscores his message to the U.S.:

It is about time to provide the opportunity for an in situ assessment of the conditions in U.S. prisons and detention facilities.”