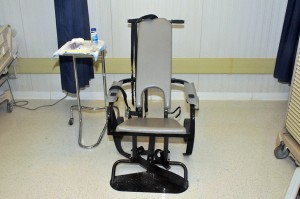 A force-feeding chair at Guantanamo.

Robert Lowell called it “man’s lovely, peculiar power to choose life and die”–the ability of human beings to give their lives willingly in service of a cause greater than their individual selves.

But the state of California, with the approval of a federal judge, now has license to deny even this last, most desperate human right to the dozens of men in solitary confinement who are risking death after six full weeks of hunger striking.

As the Associated Press reports, this afternoon “state corrections officials and a federal receiver who controls inmate medical care received blanket authority from U.S. District Judge Thelton Henderson of San Francisco to feed inmates who may be in failing health. The order includes those who recently signed requests that they not be revived [DNRs].”

According to the AP, as many as 70 men are in dire condition and may be candidates for force-feeding. They will join the dozens of men at Guantanamo who have been fed for months via tubes forced through their noses and down their throats into their stomachs–a practice that is clearly in violation of international law.

The state has chosen this course rather than negotiate seriously with the hunger strikers. California Corrections head Jeffrey Beard has called the 43-day strike a “gang power play,” although the former gang leaders are among the starving. Governor Jerry Brown stands silent. But presumably they are in agreement with the force-feeding strategy, which will prevent the strikers from becoming martyrs.

6 thoughts on “California Prison Hunger Strikers to Be Force-Fed”