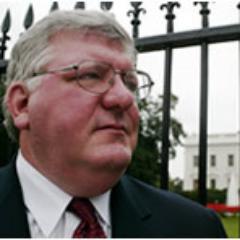 When it comes to Washington politics, a handful of congressman lead the way in shaping prison reform. At the forefront of this movement are John Conyers, Michigan’s ranking member of the House Judiciary Committee; Bobby Scott, Virginia’s indefatigable opponent of solitary confinement; and Cedric Richmond, who, as a member of the Louisiana legislature, has spoken out against the treatment of the Angola 3 and the use of solitary confinement in state prisons.

But behind the scenes, there is one key player. His name is Pat Nolan, the conservative evangelist who is front and center as Vice President of Prison Fellowship, the nation’s largest prison reform group, founded in 1976 by the late Chuck Colson, Nixon’s hatchet man and Watergate co-conspirator who, after serving time in federal prison, emerged as an evangelical Christian, devoted to prison reform.

Nolan has credentials few in Washington possess. He is an attorney, a former Republican Leader of the California State Assembly (1978 to 1994) and was appointed to the nine-member U.S. Prison Rape Elimination Commission in 2004. Nolan is also a former prisoner who served 25 months following an FBI sting for campaign finance violations. He was shipped from one federal prison camp to another, where he worked as a mechanic, raked gravel for a playground for the guards’ children, served as a chaplain’s assistant, and most of all, like everyone else in prison, sat around doing nothing. Colson recruited Nolan while he was serving time.

Now, living outside Washington, D.C., in Leesburg, Virginia, Nolan has easy access to Republican leaders in Congress. He is a major player in Right on Crime, a group which, among others, includes Grover Norquist, the ubiquitous right wing lobbyist, and Newt Gingrich, who rose from the House conservative back bench to become speaker and leader of the new right. Gingrich’s presidential ambitions are currently being restarted as the star of CNN’s revived “Crossfire” program.

Although a relatively small budget item, prison reform can become a priority for libertarian-minded Republicans. It symbolizes government overreach into the lives of ordinary people and incites longstanding loathing of the labor unions that supply the often reckless guards who run many of the federal and state prisons and oversee solitary confinement practices.

Libertarian Republicans are not opposed to sending criminals to jail. In California, Nolan was the hero of the victims’ rights movement.

There are two main planks to Prison Fellowship. First is the ideological strain of libertarian Republicans, who adamantly oppose intrusion by the federal government into the daily lives of citizens. The second, largely based on religious ideology, emphasizes that people in prison deserve a second chance. This sets it in opposition to the do-nothing stagnation of the modern prison.

Prison Fellowship itself is not opposed to capital punishment, but under Nolan comes down sharply in opposition to solitary confinement.

Earlier this summer, Nolan sat down with me for a long talk about his program, his own life in prison and the principles on which he believes reform should be based. Following are some of the highlights of our discussion, parts of which are presented in the videos below.

I have told people it’s the twin curse of loneliness and boredom. It’s awful. I’d rather have something to do than just have to stand around and look busy. Boy! If you were caught bringing writing paper out to write notes or a letter to your wife or friends or a book to read, that was a mortal sin.

We haven’t set a specific [time limit on solitary confinement]. We don’t develop position papers as such. We react to proposals, and try to run them through a restorative justice filter to see does this work or not… There should be a limit and a much shorter review to see if it is still appropriate and also whether this is having detrimental impact.

I didn’t do solitary, but knew plenty of people who did. It’s a combination of the violent or mad or both. The noise is constant. People shrieking, slamming things. The smell is awful because there is excrement everywhere. You have no human contact. Your meals are fed to you through a slot. They bring a portable shower to your cell, so you never leave your cell to take a shower. You never leave your cell. It’s pretty miserable.

A lot of time people get sent to the SHU for their own protection. If they are a victim of violence or a rape, they get sent to solitary supposedly to protect them. What that does is discourage anybody from reporting anything…

Putting someone in solitary is a fate worse than death. I agree that’s not humane. A punishment or consequence should never be harsher than whatever bad was done. Whatever these folks did – and usually it is an internal offense inside prison that gets them in these solitary cells – nothing, other than murdering a guard, can possibly justify putting them in these conditions that drive them mad. The Soviets and the Germans were great at it. They discovered all sorts of techniques for sensory deprivation and frankly a lot of them are in use in solitary. The constant light, the deprivation of human touch, the lack of exercise, the lack of reading materials.

Every prison is different, but sometimes they are allowed one book in a cell. Sometimes a generous warden will allow more than that. Some have a rule that if they get a book they’ve got to turn one in… But for someone studying their faith, you not only want a bible… There are brilliant commentaries on it to help you understand it. They give depth to it. Not just Christians. Jews have wonderful books, Maimonides and others who have written on the scriptures. To say you are only allowed one book seems odd… It’s mean spirited.

The Federal Bureau of Prisons is under attack. What are your thoughts on this?
The federal system has been this incestuous system… There is no real oversight of it. The congressional committees are dealing with so many other issues. Nobody really bores in on it.

I’ll give you an example of how they can mislead Congress. There was a subcommittee meeting and the previous director of prisons was testifying the day after I did… One of the questions was how many of the inmates with addictions get treatment. He said, ‘Congressman, I want you to know that every single prison run by the Bureau of Prisons has drug treatment programs.’ That was a non-responsive answer, because yes, they all have drug treatment programs, but they are so small that they cannot give treatment to most of the people with addiction. About 10 percent of the federal prisoners with addictions get any treatment at all.

That was one of arguments for changing the law in California that had kids locked up for life. Can you imagine dying in prison for something you did when you were 13 or 14 years old? It’s appalling. So the idea is that we won’t do the death penalty, but we will essentially torture them. How has that improved the human condition? I don’t know where people like that come from. They try to make a political compromise to get the death penalty repealed and they figure they can chip away at that.

What are your thoughts on private prisons?
The left is really upset by private prisons… I don’t care whether they are private firms or public… They are both agents of the government and the question is if the people are being treated decently. Are they protected from violence? Are they given opportunities to learn? There are some good ones and some bad ones. I say hold them accountable for what they do, not for who signs their paychecks.