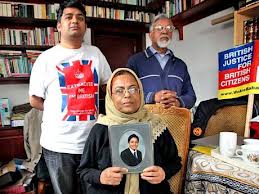 Talha Ahsan’s brother, mother, and father in their London home.

Today we arrive in London, where on Thursday we will speak at a forum entitled “Extradited to a Future of Torture: The Reality of Solitary Confinement in America.” Hosted by the International State Crimes Initiative (ISCI) at Kings College London, the event features the premiere of a film made by the Yale Visual Law Project, The Worst of the Worst, about Northern Correctional Institution, Connecticut’s supermax prison. It will also include talks by Tessa Murphy of Amnesty International and Hamja Ahsan, the brother of Talha Ahsan, a young British national who is currently being held in pre-trial solitary confinement at Northern.Talha Ahsan is one of five UK residents extradited last year to the United States to face terrorism-related charges. The story of their extraditions was not big news in the United States (though we covered it on Solitary Watch, here, here, and here). In the UK, however, it was a huge and controversial story involving inside British politics and the European Court of Human Rights. The story of the extraditions–and particularly, of Talha Ahsan, who suffers from Asberger’s Syndrome and is accused under vague “material support” charges of participating in a jihadist website–is told in dramatic detail by the ISCI’s Ian Patel in a recent New Statesman article, “The Impossible Injustice of Talha Ahsan’s Extradition and Detention,” which deserves to be read in full.

Talha Ahsan is a poet who has continued to write throughout his imprisonment. The following poem was composed while he was being held in (comparatively unrestrictive) detention in Her Majesty’s Prison Long Lartin. It refers to ADX Florence federal supermax prison in Colorado, which is where Ahsan, with good reason, fears he will end up. –Jean Casella and James Ridgeway

Five years ago they brought me to a cell

and ever since a waiting game plays here.

As they decide on sending me away,

my parents grow so grey and sad at home.

How will they manage visiting me there

or must they wait until the end of time?

Ma, hear my oath, by him whose hand is time,

bars stand in worship with me in this cell.

So even if I’m extradited there

and taken from my humble parents here,

then tell them paradise is our true home

whose gardens years will never fade away.

To Florence prison I’ll be sent away

It doesn’t matter what will be my time.

No prison ever can be called my home,

how ever long they put me in a cell.

A higher power occupies me here

who’s closer to me even over there.

Perhaps they’ll clean their hands of me once there.

And then my country feels I’m wiped away.

Though germs stay always floating from me here:

these particles will gather born in time,

a culture breeding from a tiny cell,

to carry on infecting every home.

Theresa May, a minister at home

though feeble servant to her masters there;

So let me while I can devote my time

to work for my own justice over here.

I pitch a tent for battle waiting here.

And in this heart of mine you’ll find a home,

free from the crumbling effects of time

or any rotting thoughts of being there.

It is a sin for me to run away

As patience brings my glory to this cell.

For time will be a brief sojourning here,

and there, or anywhere I make a home –

Away! A caravan escapes my cell.