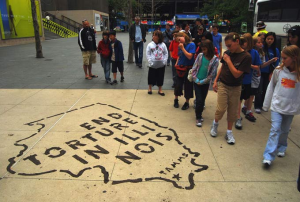 A new article from Creative Time Reports highlights the role played by politically engaged art in the campaign to shut down Tamms supermax prison in southern Illinois. Tamms closed its doors for good in January, but only after a protracted battle in which family members of the incarcerated, grassroots activists, and artists–joined to form the group Tamms Year Ten. Their goal was to “End Torture in Illinois”–the message of the mud stencils that members painted on walls and sidewalks across Chicago.

Creative Time showcases one of the campaign’s most resonant projects, “Photo Requests from Solitary.” As Laurie Jo Reynolds and Stephen F. Eisenman of Tamms Year Ten describe it:

“Photo Requests from Solitary” was one of many projects launched by Tamms Year Ten to build publicity for the campaign. The men in Tamms were invited to request a photograph of anything in the world, real or imagined. The resulting requests were touching and often surprising. They included: the sacred mosque in Mecca, comic book heroes locked in epic battle, Egyptian artifacts, Tamms Year Ten volunteers and a brown and white horse rearing in weather cold enough to see his breath. Willie Sterling III asked for a photograph of a vigil at Bald Knob Cross on top of a hill in southern Illinois to pray for his deliverance from Tamms and to be granted parole…

Photographers from across the country offered to fill photo requests for men in isolation. Chicago animator Lisa Barcy, Dutch photographer Harry Bos and Baltimore filmmaker Stephanie Barber each orchestrated a version of one prisoner’s detailed request for a lovesick clown: “A lovesick clown: holding a old fashioned feathered pen: as if writing a letter: from the waist up: in black and white. As close up as possible: as much detail as possible: & the face about 4 inches big.”

Read the rest of the story of Tamms Year Ten’s campaign here. And for more photos, see the companion piece on the Daily Beast.

Here in San Quentin, I See Why Solitary Confinement Must End