Twenty Years After the Lucasville Uprising, Trying to Tell the Story

Staughton Lynd is a lawyer, historian, educator, author, and lifelong activist for peace and justice. For four decades, he and his wife, Alice Lynd, have worked on prisoners’ rights issues, especially in Ohio where they live. The Lynds were of counsel in a landmark 2001 class action suit, Austin v. Wilkinson, which challenged the constitutionality of conditions the supermax Ohio State Penitentiary in Youngstown. Among Staughton Lynd’s many books is Lucasville, the story of one of the longest prison uprisings in U.S. history, which took place twenty years ago this week at the maximum security Southern Ohio Correctional Facility in Lucasville.

According to the publisher’s description: “More than 400 prisoners held L block for eleven days. Nine prisoners alleged to have been informants, or ‘snitches,’ and one hostage correctional officer, were murdered. There was a negotiated surrender. Thereafter, almost wholly on the basis of testimony by prisoner informants who received deals in exchange, five spokespersons or leaders were tried and sentenced to death, and more than a dozen others received long sentences. Lucasville examines the causes of the disturbance, what happened during the eleven days, and the fairness of the trials. Particular emphasis is placed on the inter-racial character of the action, as evidenced in the slogans that were found painted on walls after the surrender: ‘Black and White Together,’ ‘Convict Unity,’ and ‘Convict Race.’ Lynd has stayed in touch with the Lucasville Five, and in this essay he champions their right to tell their own stories–a right that has been challenged by the state. 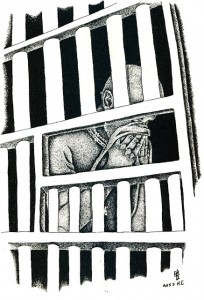 What is it like to be behind bars and try to tell your story to the world outside?

The old poem doesn’t see a problem, because: “Stone walls do not a prison make/Nor iron bars a cage/Minds peaceable and quiet/Take them for a heritage.”

King Lear was almost anxious to go behind prison walls with his daughter Cordelia.

“Come, let’s away to prison;
We two alone will sing like birds i’ the cage;
When thou dost ask me blessing, I’ll kneel down.
And ask of thee forgiveness: so we’ll live,
And pray, and sing, and tell old tell tales, and laugh
At gilded butterflies . . . and we’ll wear out,
In a wall’d prison, packs and sets of great ones
That ebb and flow by the moon.”

However, few who go behind stone walls and spend their days behind bars attain the peace of mind to “take them for a heritage.” For that matter, few so confined are able to share that solitude with a favorite daughter.

More common, and more appropriate, is the attitude of the imprisoned 19th-century German workers who composed the song “Die Gedanken sind frei” (thoughts are free). No matter where they put us, sang the embattled workers, our thoughts will burst our chains and cause the prison walls to crumble in two.

There are two arguments for free communication by prisoners, especially by those in solitary confinement. The first and no doubt the most important is, thereby one seeks to preserve one’s humanity.

My wife Alice and I first came into contact with prisoners confined alone when the State of Ohio decided to build its first supermaximum security prison in Youngstown, near where we live. The Mayor pronounced the event a “home run.”

While the new prison was still under construction, members of the Workers’ Solidarity Club and Youngstown Peace Council organized a community forum at a small church near the entrance to the facility. Alice sought contact with persons who had experienced solitary confinement elsewhere in Ohio. One man wrote us that what was done to him was so much more harmful than anything he had committed that he had lost his ability to forgive.

At the same forum we met the sister of George Skatzes (pronounced “skates”), one of the five men sentenced to death after the 11-day uprising in April 1993 at the maximum security prison in Lucasville, Ohio.

Alice and I made the first visit to a prisoner in the Youngstown supermax when we visited George in June 1998. He was locked on one side of a small cubicle. We were placed on the other side, separated from George by a panel of some transparent material. Although George was securely confined in his side of the cubicle, throughout our visit a guard sat just outside it. And throughout our visit, which lasted about two hours, George Skatzes, as he sat on a concrete stool with no backrest, was handcuffed behind his back.

Conditions have improved in the fifteen years since that experience. Yet until recently no visit to a prisoner at the Ohio State Penitentiary could be a “contact” visit permitting the prisoner to hug or touch a parent, a spouse, or in the case of Keith LaMar (another of the Five), his little niece and nephew.

A few days ago there was a meeting about Lucasville at the local university. After the Attorneys Lynd made presentations, Keith LaMar was able to speak to the group by telephone as a photograph of him was projected on a wall.

The most intense moment of the occasion came when a student from Saudi Arabia asked Keith what had been the high point and the low point of his almost twenty years of living alone in a cell. The high point was the day his family had been come for his first contact visit. The person managing the photos projected a picture of Keith, with an enormous grin, as little Kevin sat on his shoulders and Kayla sat close beside him.

The low point proved more difficult. Keith said it was when his granddad, on his death bed, called Keith at Lucasville to tell him to turn his life around. After the call (here Keith was unable to continue and Alice, who has been editing Keith’s memoir, took over the narrative), Keith asked the guard whether he could make a follow-up call to tell his granddad that he understood for the first time what the person who meant most in his life had been trying to tell him. The guard said No, Keith had had his call for the month. He could use the telephone again after his grandfather was dead.

By this time people at both ends of the telephone line were weeping.

The next day Alice and I received an e-mail from a man who had been in attendance. The e-mail said in part:

I found the phone conversation with the prisoner at the Youngstown Supermax overwhelmingly powerful. After hearing LaMar’s words last night, and the tone in which they were spoken, I think the punishment he has suffered–seventeen years in solitary confinement–far outweighs the crime for which he is being punished.

Politics don’t matter in this issue. I am a military veteran, and one of six registered Republicans in Mahoning County. But I am a human first, and this is a human rights issue. What our state is perpetrating on these five prisoners is inhumane and immoral.

But the prisoner’s ability to express his humanity, and the civilian’s ability to receive and perceive it, are only one aspect of the absolutely necessary communication between those inside and outside walls and bars.

There is also the fact that George Skatzes and Keith LaMar are sentenced to death and only a broad campaign outside both prisons and courts of law has any hope of saving them. Determining the truth is an indispensable part of such a campaign. And seeking the truth of what really happened and did not happen during the eleven days of the rebellion at Lucasville in 1993 requires the participation of those who know most about it: the men who were there. And that participation can only come about adequately if journalists, trained to cross-examine and assess the information they receive from others, are permitted full access to all categories of prisoners.

The indispensability of media access is wonderfully articulated in a dissent by Justices Powell, Brennan and Marshall in a Supreme Court case captioned Saxbe v. WashingtonPost. In that case, the Court of Appeals sent the case back to the District Court to determine the “extent to which the effective reporting of news has a critical dependence upon the opportunity for private personal interviews.” The District Court heard testimony from six expert witnesses, the last of whom had been counsel to the New York State Special Commission on Attica.

The explanation of the necessity for face to face interviews is too long to quote here in full. Suffice it to say that all six witnesses agreed that personal interviews are crucial to effective reporting in the prison context, and the District Court found as a fact that an absolute interview ban “precludes accurate and effective reporting on prison conditions and inmate grievances” (417 U.S. at 853-54).

For twenty years, the Ohio Department of Rehabilitation and Correction has imposed such an absolute interview ban on journalists seeking access to any and all prisoners convicted of crimes during the so-called Lucasville “riot.” Access has recently been denied to James Ridgeway, Chris Hedges. Noelle Hanrahan of Prison Radio, Professor Derrick Jones of Bowling Green State University (who is making a documentary film about the Lucasville events), and the Associated Press.

One thought on “Twenty Years After the Lucasville Uprising, Trying to Tell the Story”