Voices from Solitary: "Suicide Is Preferable to Long-Term Segregation" 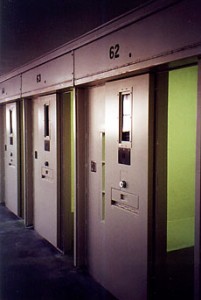 The following comes from a man currently incarcerated at Washington State’s Monroe Correctional Complex. The Washington State corrections system has been said by local media to use solitary confinement less than other states, with only 2.7 percent of prisoners (or ~400) in long-term solitary confinement. However, Solitary Watch has noted that the figure is actually twice this, when Administrative Segregation (which may last over a month) is taken into consideration. This prisoner, A.P., has reported that “the State’s Dept. of Corrections is expanding solitary confinement models to general population’s long-term lockdowns.” Incarcerated for a decade, he reports spending most of his prison time in solitary confinement, which he says is partly retaliation for his frequent litigation against the Washing Department of Corrections. He has advocated for accurate descriptions of solitary confinement by noting the types of disturbing behaviors that go on in isolation units, “‘Smearing feces on ones self or eating it’… rather than merely saying ‘Conditions are bad.'” -Sal Rodriguez

Out of the past ten years I’ve been incarcerated on two arson charges for burning two cars. I got 24 years for [it] (no one was hurt) while racking up repeated appeals, most of that has been in solitary confinement. I have a college degree and worked professionally for years before this mess came down. I’m now 53-years old; my family won’t communicate with me and most of all, my two sons won’t communicate despite my still never forgetting their birthdays and holidays with cards and such. Prison mail censorship has frustrated communications so much, most people simply give up trying to keep up.

I’ve seen prisoners in solitary degrade quickly and slowly, depending on their psychological strength and grasp on more in life than rap music no meaningful life experiences. Suicide is preferable to long-term segregation (and long prison sentences). Those who don’t kill themselves learn to compress their hatred that grows like cancer while being forced to suppress their true emotions, in a form of Stockholm Syndrome tactics, to survive. This promotes recidivism and violence. A person, like a dog at a kennel, can only be compressed so much before they either explode or implode. Either way, none is good. Prisoners teach deception to survive and force prisoners to become manipulative of DOC policies and staff because the truth and honesty only leads to negative treatment by D.O.C. staff. For example, to get adequate food, one must feint a medical condition requiring more just to get enough.

One can never be open with staff or even prison psychologists (help that hurts) because it is not confidential; is often interpreted and repeated by untrained staff and it is best to simply internalize and put on a fake (happy) front and never reveal any true feelings, or the prisoner will end up longer in solitary; in a strip cell (where they take away all your clothes, bedding, etc, and put you on a dirty, hands only diet) or some other adverse treatment.

In Washington State, at the Washington State Penitentiary (WSP) I recently had to refuse to eat for weeks to get transferred out of because it is a hopeless place for anything. At WSP in general population (not considered segregation at all) they employ a ‘Level 1” and “Level 2” program policy where even general population prisoners are locked in their cells 7-days a week except for you or three yard times, showers, picking up and dropping off meal trays (meals must be eaten in cells the same size as segregation cells, but with two persons to a cell instead of one) or special program attendance. This has promoted fights, frustration and even stabbings.

I have complained to DOC-HQ about this yet they claim this violence fermentation doesn’t exist—yet continue to lockdown and take away more and more regularly. The food even has become so bad, food poisoning and e-coli; treatments are routinely ignored by staff in food service to convince them correction is needed. They tell us to “buy our own food” (with money we cant get or if we do, they confiscate most money that is sent us from family). It is no wonder animals become more mean when treated so badly.

One thought on “Voices from Solitary: "Suicide Is Preferable to Long-Term Segregation"”