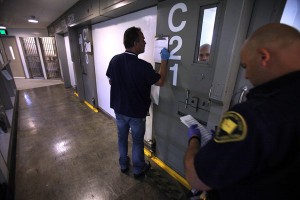 On January 7th, the Seattle Times reported that “Washington’s prisons are at the forefront of a new approach to solitary confinement, finding that a new focus on rehabilitation may calm some inmates’ behavior in prison and prevent violence once they are back on the street.” The article reports:

[Washingon] began reconsidering solitary after violent clashes in IMU units at Shelton in the mid-1990s. About 400 of the state’s 17,500 inmates are in such units, which also house death-row prisoners and those in protective custody.

University of Washington professor David Lovell studied solitary confinement in the state under a DOC contract, and found the isolated inmates were most often gang members serving long sentences for violent crimes. Up to 45 percent were mentally ill or had traumatic brain injuries.

And once in solitary, they stayed in — for nearly a year, on average — because prison staff were reluctant to send likely violent inmates back into the general population.

Those who were released often returned, after committing new assaults on corrections officers or other inmates.

Most disturbing, Lovell found a quarter of inmates were released to the streets directly from solitary confinement. Unaccustomed to human contact, they were more prone to quickly commit new violence.

Life in the IMU, or Intensive Management Unit, has been described by one man in a letter to Solitary Watch:

You are not allowed meaningful recreation, just an hour of exercise an empty 15 x 12 cell, no church attendance, real library service or educational programming. All of your personal possessions are denied to you. You will remain in your 7×12 cell for 23 of every 24 hours five days a week. Two days a week you will not come out of your cell at all. You will eat all of your meals within a few feet of your toilet. You will be in handcuffs each and every time your cell door is opened for any reason.

The Seattle Times reports that Clallam Bay Corrections Center’s Intensive Transition Program (ITP) is a four-step, nine-month long process with gradually increasing privileges. Inmates participating in the program are allowed time out of their cells for coursework (while chained to desks) and the gym. As of last week, there were thirty participants in the program.

There are, however, some questions and information missing from the story. Using the Seattle Times numbers, Washington DOC holds approximately 400 inmates in solitary confinement out of 17,500 (or, 2.7%). A July 2012 News Tribune article even concluded that this figure indicates that “Isolating prisoners less common in Washington than most places.” This is slightly less than the 3-5% of inmates the average state prison system has in solitary confinement.

However, the 400 figure only counts inmates in Intensive Management Units. According to Chad Lewis from the Washington Department of Corrections: “Today we have approximately 430 offenders on Administrative Segregation Status.  This includes offenders at all custody classification levels.  The reasons for placement/retention include:  Pending investigation, Pre-hearing confinement, Disciplinary Sanctions, Pending transfer.   Administrative Segregation is a short term assessment process, used to identify the appropriate housing assignment for the offender.  Typical length of stay is less than 47 days, exceptions require approval at the Headquarters level.”

“Almost all of our Ad-Seg housing is single bed, and we try to avoid housing any offenders on Ad-Seg status with another offender,” according to Selena Davis also of the Department of Corrections. In other words, the population of inmates in solitary confinement today is more than double than previously reported.

Solitary Watch has previously reported the case of an African-American inmate who was involuntarily isolated for nearly two years for his own protection, held variously in Administrative Segregation and the IMU. Another inmate who has written Solitary Watch reports being six months into a two year long term, his seventh time being sent to the IMU. Unlike inmates in the ITP program at Clallam Bay Correctional Center, he reports receiving no rehabilitative outlets.

While Clallam Bay Correctional Center’s program does represent a step towards gradual easing of the “hell”  of isolation, it does not appear to be indicative of  systemwide restraint in the use of solitary confinement, at least as can be measured by the number of inmates in solitary and the duration of their terms.