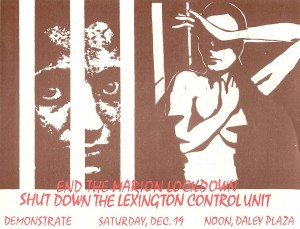 The use of long-term solitary confinement was born in the United States in the late 18th Century, at Philadelphia’s Walnut Street Jail and later its Eastern State Penitentiary. It was largely abandoned after it was found to cause madness and death, and was used only sparingly for a century and a half. The widespread use of long-term solitary was reborn in 1983, in what came to be known as the Marion Lockdown. Following the murders of two prison guards at the federal penitentiary in Marion, Illinois, the entire prison was put on lockdown status–and never taken off. Prisoners were held in round-the-clock solitary confinement, and Marion became the model for “control unit prisons”–the supermaxes and Special Housing Units that were built in large numbers in the two decades following the lockdown.

A new book by Nancy Kurshan, published by the Freedom Archives in San Francisco, details the history of the movement that rose up in response in the form of the Committee to End the Marion Lockdown (CEML), which Kurshan co-founded in 1985 and which eventually turned into a broader campaign against isolated confinement. Out of Control: The Fifteen Year Battle Against Control Unit Prisons, is available online in an abridged version, and the book can be purchased from the Freedom Archives.

Earlier this month, Angola 3 News published a long interview with Nancy Kurshan. The first few questions and answers are reprinted below; the full interview can be read on the A3 News site.

Nancy Kurshan: There are at least 2 ways to answer that question. One is to describe the daily workings. The other is to elucidate the underlying dynamics.

There are variations from prison to prison, but generally speaking, a control unit prison is one in which every prisoner is locked away in their own individual box about 23 hours a day under conditions of severe sensory deprivation. The prisoner eats, sleeps and defecates in the windowless cell. Meals come through a slot in the door. In some cases the prisoner may be out of the cell a couple of times a week for exercise, but in other circumstances the exercise area is even more limited and is attached to the cell itself. Most control unit prisons have little access to education or any recreational outlets.

Usually, control units severely restrict the prisoner’s connection not just with other prisoners, but with family and friends in the outside world. At Marion, only family members could visit, upon approval, and only for a small number of visits per month. The amount of time allowed per visit was severely restricted, and there was no privacy whatsoever and no contact permitted between prisoner and visitor. Visiting took place over a plexiglass wall and through telephones. Guards were always within earshot. The prisoner had to be searched before and after, sometimes cavity searched. The visitor had to undergo a body search as well. The prisoners were brought to the visit in shackles.

Regarding the underlying dynamics, the intent is to make the prisoner feel that his or her life is completely out of control. That is not an unintended consequence. The purpose of the control unit is to make the person feel helpless, powerless and completely dependent upon the prison authorities. The intent is to strip the individual of any agency, any ability to direct his or her own life. A control unit institutionalizes solitary confinement as a way of exerting full control over as much of the prisoner’s life as possible.

There is no pretense that this is a temporary affair. Instead it is long-term, severe behavior modification, and it is the most vile, mind and spirit-deforming use of solitary confinement. Control units represent the darkest side of behavior modification. Inside a control unit, the prisoner usually has no idea how long he or she will be there. It is an indeterminate sentence, and usually the rules or guidelines for exiting are unclear at best and impossible to comprehend at worst. It is a hell without any apparent end.

Being sent to a control unit prison is tantamount to torture, as acknowledged by many human rights organizations including Amnesty International and Human Rights Watch. Prisoners are held under conditions that today are not considered ‘humane’ even for animals. They are an extreme abuse of state power.

The existence of the control unit also functions to control other prisoners who are in the general population. This is as important to the system as the impact on those actually in the control unit. The fear of imprisonment in this worst of all prisons is meant to scare all prisoners into tolerating intolerable conditions. The word ‘Marion’ was meant to strike cold fear into the hearts of prisoners throughout the federal prison system.

A3N: You write that “not only did federal control unit prisons proliferate, but now virtually every state system in the country is capped off by a control unit. Whether they are called Control Units, Supermax, SHU (Secure Housing Unit), ADX (Administrative Maximum Facility), a skunk by any other name still stinks.” Can you tell us more about how control unit prisons and solitary confinement in US prisons evolved since the mid-1980s when you began your work?

But over the years, many state ‘prisoncrats’ came to Marion to see the control unit. As the years went on, most states built control units or modified existing institutions to accommodate control units. And, of course, the feds, in response to our criticisms of Marion, claimed that the problem with Marion was that it was not built to be a control unit. So they built a bigger and ‘better’ control unit in Florence, Colorado. This demonstrates that unless the ideology changes, they will respond to criticism by morphing one way or another, but never really moving in a progressive direction.

Long term solitary confinement has become a pillar of their ‘correctional’ policy. However, it seems that two serious challenges have developed. First, this form of imprisonment is expensive and our society is running out of money, thanks in part to our bloated military agenda.

Secondly, in some places like California, prisoners have stood up in the thousands and said: “We won’t take it no more.” There have been hunger strikes of 6,000 or more prisoners and support on the outside that has helped give voice to their grievances. In response to hunger strikers at Pelican Bay, the New York Times in an editorial on August 1, 2011 entitled “Cruel Isolation,” lamented that “For many decades, the civilized world has recognized prolonged isolation of prisoners in cruel conditions to be inhumane, even torture. The Geneva Convention forbids it. Even at Abu Ghraib in Iraq, where prisoners were sexually humiliated and physically abused systematically and with official sanction, the jailers had to get permission of their commanding general to keep someone in isolation for more than 30 days.”

Prisoners around the country are attempting to cast light on the situation, but they can only do so much from inside. And let’s face it, despite Albert Hunt’s article in the NY Times on Nov. 20, 2011 entitled “A Country of Inmates, that “With just a little more than 4 percent of the world’s population, the U.S. accounts for a quarter of the planet’s prisoners and has more inmates than the leading 35 European countries combined,” this situation is not even on the national agenda. I listened to Obama’s State of the Union speech last night, and nowhere did I hear a mention of the fact that we are a country of inmates, disproportionately Black and Hispanic.

Unfortunately, economic concerns always trump the moral. The Governor of Illinois recently announced the closing of Tamms Prison, the state’s control unit prison that we fought so hard against in the 1990s. On the heels of that decision, they have also announced that an Illinois prison that has been vacant, will now be sold to the feds, and part of it will be a new control unit prison. The same Senator Dick Durbin who recently held hearings to look into solitary confinement on June 19, 2012 has heralded this deal, as it will bring more jobs to the community of Thomson where unemployment is high. The employment of some seems always to trump the concern about human rights for others…