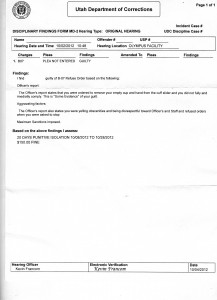 Utah State Prison in Draper, Utah currently holds over 91 prisoners in solitary confinement in the Uinta One facility. Prisoners have described the facility as “a place of pain and terror” and a place where inmates “expect tragedy.”

While Utah Department of Corrections admits that the facility on occasion houses prisoners diagnosed as “mentally ill”, they point to the existence of the prisons Olympus Mental Health Forensic Facility.

The Clinical Services Bureau manages a 155-bed stand-alone housing unit for offenders with the most severe mental illnesses. This facility is designated to provide a therapeutic environment that promotes appropriate stabilization and behavioral change.

Solitary Watch has been in contact with an individual in the Olympus facility.  In his late 50s, he has been routinely transferred between Uinta One and Olympus for a decade. His medical documents indicate diagnoses for “Paranoid States (Delusional Disorders)…Other and Unspecified Protein-Calorie Malnutrition…Self-inflicted Injury By Cutting and Piercing Instrument” and other health issues. He reports constant harassment by the guards, who he says, among other things, falsely accused him of rules violations. In support of this, he provided documentation indicating that he was accused of a charge of “Abuse/Misuse Medications” based on “Some Evidence.” He was ultimately found not guilty of the charge, despite not participating in the Disciplinary Hearing.

“When people do wicked things to you and you complain, that isn’t paranoia, it’s circumstance driven. When you refuse to trust those whose conduct does not improve, that’s not paranoia. It’s recognition of active unremitting threat,” the prisoner writes. He reports having been placed in a wheelchair and being “upended onto my face” when the guard pushing the wheelchair “made a typical fast hard turn.” After the incident, he received “No apology from anyone whatsoever…I was told to wait until a nurse came to check on me…back in this cage I sat unmoving. I couldn’t get off the chair and on the ‘bed’…My ears are ringing incessantly…I can’t sleep more than two-hours…My eyes aren’t properly focusing,” he reports.

A month before this, he was found guilty of “Refuse Order” (see image), because he did not “fully and imediatly[sic] comply” with an order to remove an “empty cup and hand from the cuff slider.” When chastised for his behavior, according to the report, he was “disrepectful” to the staff. For this, he was ordered to 20 days in “Punitive Isolation” and assessed a $150 fine.

When asked to provide the policies that guide such punitive measures, Department Spokesman Stephen Gehrke was unaware that such policies are in writing. “I’m not aware whether there is some sort of document or guideline that lists offenses and punishments or repercussions on a case-by-case basis. I believe the response to each incident is specific to the individual details of each circumstance and takes into account aggravating or mitigating factors, which is why the prison employs hearing officers to listen to the offender’s account, review documents, and take into account all other forms of information,” he wrote via email.

“‘This is prison medicine–we don’t care and we don’t have to!’,” the prisoner in Olympus characterizes the approach of the prisons medical officials.

This kind of treatment of people in prison is all too common in the United States. A 2003 Human Rights Watch report estimated that one-third to one-half of individuals in American isolation units were diagnosed with a mental health problem. As of September 2011, one-third of Virginia’s Red Onion State Prison supermax population had a mental health diagnosis. The individual in Olympus is among many in isolation units who attempt suicide while in solitary confinement.  In 2006, it was noted that in California and Texas, suicides in prison disproportionately occurred in solitary confinement units.

Click here to read more of Solitary Watch’s reporting on Utah’s use of solitary confinement.