The Belleville News-Democrat known for a 2009 exposé that helped rouse opposition to conditions at Tamms Supermax, has now provided new ammunition in the longstanding battle to close the notorious prison. In addition to being both unnecessary and abusive, Tamms is incredibly inefficient, according to a new story by George Pawlaczyk and Beth Hundsdorfer.

Tamms Supermax, which is part of the Tamms Correctional Center in southern Illinois, holds all its inmates in solitary confinement, which was the purpose of the facility’s design. After years of activist opposition and legal wrangling, it is now two-thirds empty. According to the News-Democrat:

Tamms has 208 guards and supervisors in its maximum-security unit, or C-max, to handle 138 prisoners, for a security-staff-to-inmate ratio of 1.5-to-1. At Alcatraz in the 1940s, the ratio was 1-to-3, according to the U.S. Bureau of Prisons.

The Tamms security staff also clocked at least $884,000 in overtime since about this time last year, according to state payroll records for a one-year period ending Nov. 12. Overtime was accrued despite the fact that inmates in the solitary confinement supermax unit are held in their cells 23 hours a day and have no contact with other prisoners.

In addition, there are 16 food supervisors earning an average of $71,600 a year working at Tamms. That’s the same number of food supervisors as at the Pontiac Correctional Center, which houses around 1,700 maximum- and medium-security inmates.

In all, there are 300 employees for the entire Tamms operation, which includes an adjacent minimum-security camp with 89 inmates and about 13 guards, with an annual payroll of approximately $18.7 million, according to figures from the Illinois Department of Corrections. . . .

At the current 138 C-max inmate population level, it costs approximately $85,000 just to guard one maximum-security prisoner per year excluding overtime. . . . 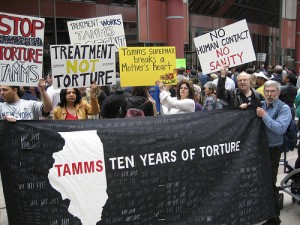 Governor Pat Quinn has sought to close the facility to save money in a state with an ongoing budget crisis, but efforts were stalled when the guards’ union, the American Federation of State, County and Municipal Employees (AFSCME), filed a lawsuit claiming that closing the prison would make conditions unsafe at other prisons. However, according to the news story, a state arbitrator who was agreed upon by both sides in the lawsuit ruled that closing Tamms would not increase danger to prison guards. Currently, state legislators are considering whether to restore funds to keep Tamms open, which would require them to override Quinn’s veto.

According to the story, the staffing levels “surprised” some state legislatures. State Sen. Bill Haine, D-Alton, who had recently voted with the Senate majority to keep Tamms open asked, “Who’s running things down there? I never heard about any of this,” and, “I wished I had known about this before the vote.”

“It sounds absolutely ludicrous. I wasn’t aware of this,” said Rep. Jim Sacia, R-Freeport, a member of the House Judiciary II and Appropriations Committee.

“I don’t know why there would be 16 food supervisors at Tamms,” said Rep. Dennis Reboletti, R- Addison, a member of the Prison Reform Committee. “We need to look into these staffing levels.”

According to the article, food is not cooked on the premises but comes in cans or packages from a Florida wholesaler. There are two full-time GED instructors who do not actually see any students, but conduct classes through mail. And the prison employs a chaplain at $74,650 per year even though no communal religious services are held at Tamms. Laurie Jo Reynolds, organizer for Tamms Year Ten, told the News-Democrat: “Welcome to the AFSCME prison state: 16 food supervisors microwave packaged meals, two full-time GED instructors see no students, and 13 nurses” monitor men on suicide watch due to sensory deprivation,” she said. “Meanwhile, the full security staff guards a two-thirds empty prison.”