This new infographic from the Prison Policy Initiative shows the impact of felon disenfranchisement laws. While most states forbid people to vote while they are in prison, and many extend that ban to people on parole, only a handful make it next to impossible to regain your right to vote if you’ve ever been convicted of a felony. Even after you’ve served your time, it’s likely you’ll never vote again. Among these are two key swing states, Florida and Virginia, where some 2 million people are permanently disenfranchised.

According to PPI’s data, a full 9 percent of Florida’s voting-age population is disenfranchised because they have at one time been incarcerated. In Virginia, the figure is 6 percent. Given that a disproportionate number of disenfranchised ex-felons are people of color, and that Obama polls far ahead of Mitt Romney in the black and Latino communities, it’s not hard to deduce which candidate the missing votes would favor. The results of this election may therefore hinge on the denial of a basic right to men and women who have long since paid their debt to society, but remain permanently excluded from the democratic process. (For more on this subject, see our recent article on Mother Jones.) 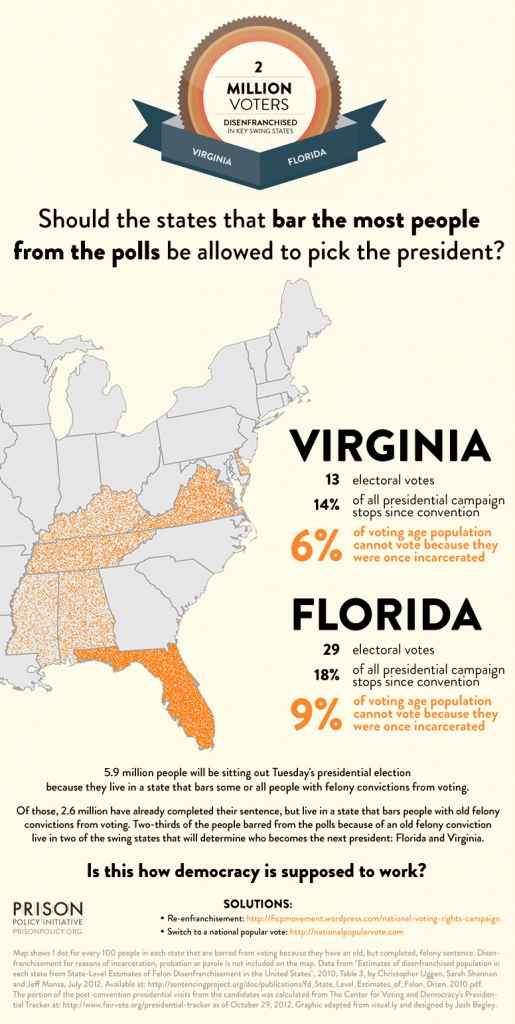