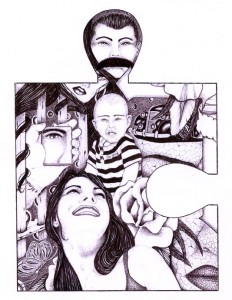 The San Francisco Chronicle today ran an op-ed called “The Crime of Punishment at Pelican Bay State Prison.” The author is Gabriel Reyes, who has spent 16 years in solitary confinement (and whose artwork is featured on the left). The brief, powerful piece begins this way:

For the past 16 years, I have spent at least 22 1/2 hours of every day  completely isolated within a tiny, windowless cell in the Security Housing Unit  at California’s Pelican Bay State Prison in Crescent City (Del Norte County).

Eighteen years ago, I committed the crime that brought me here: burgling an  unoccupied dwelling. Under the state’s “three strikes” law, I was sentenced to  between 25 years and life in prison. From that time, I have been forced into  solitary confinement for alleged “gang affiliation.” I have made desperate and  repeated appeals to rid myself of that label, to free myself from this prison  within a prison, but to no avail…

Unless you have lived it,  you cannot imagine what it feels like to be by yourself, between four cold  walls, with little concept of time, no one to confide in, and only a pillow for  comfort – for years on end. It is a living tomb. I eat alone and exercise alone  in a small, dank, cement enclosure known as the “dog-pen.” I am not allowed  telephone calls, nor can my family visit me very often; the prison is hundreds  of miles from the nearest city. I have not been allowed physical contact with  any of my loved ones since 1995. I have developed severe insomnia, I suffer  frequent headaches, and I feel helpless and hopeless. In short, I am being  psychologically tortured.

Reyes points out that his case is far from unique: “[I]n fact, about a third of  Pelican Bay’s 3,400 prisoners are in solitary confinement; more than 500 have  been there for 10 years, including 78 who have been here for more than 20 years.” Reyes’s only disciplinary citations are for donating artwork to a non-profit organization and for participating in a statewide hunger strike to protest conditions in solitary. He is part of a federal lawsuit brought by the Center  for Constitutional Rights challenging treatment of Pelican Bay’s SHU prisoners.

Reyes concludes: “I understand I broke the law, and I have lost  liberties because of that. But no one, no matter what they’ve done, should be  denied fundamental human rights, especially when that denial comes in the form  of such torture. Our Constitution protects everyone living under it; fundamental  rights must not be left at the prison door.”